These three stocks will remain in my real-money retirement portfolio for a long, long time. Should they help you manage your nest egg, too?

I welcomed Alibaba, Tesla, and American Tower into my personal investing portfolio roughly three years ago. Only one of these stocks has been beating the market by a significant margin since the fall of 2014, but that's OK. I plan to own all three for many years to come and expect them to absolutely crush the general market in the long run.

Here's why I think these three stocks are great investments for the very long haul.

Two of my three picks are not paying dividends, so their three-year returns are the same whether you reinvest dividend payouts along the way or not. Dividends do make a noticeable difference for the S&P 500 and for American Tower, of course.

So let's start there.

American Tower builds, buys, and operates cell towers and small-cell radio installations around the world. At the latest count, the company managed 40,000 sites in the U.S. and 107,000 international installations. The international site count has more than doubled over the last two years as American Tower has invested in new properties across several territories, with a focus on the large telecom markets in Brazil and India.

About half of American Tower's quarterly revenue comes from the four largest wireless networks in the U.S., while international clients account for 44% of the company's total sales. The remainder springs from smaller domestic customers.

Domestic leases are locked down for long-term contracts, with an average of 26 years remaining on their lease agreements. Expiring deals are almost always renewed for additional multi-decade lease contracts, and all of these agreements come with built-in escalator terms to increase the lease payments over time.

This is a fantastic cash machine that will last as long as wireless networks are a thing. Organized as a real estate investment trust, the company must also share the wealth with us shareholders in the form of meaty dividend payments. On top of that rock-solid investment thesis, American Tower's management is not afraid to track down new high-growth markets in developing countries.

I expect that cash flow right into my pocketbook to grow richer over the years, resulting in an enviable effective yield in the long run.

My effective yield already stands at a juicy 2.8%, far above the stock's current yield of 1.9%. Buy in now, and watch your own gap between locked-in yields and the latest dividend quotes widen year by year.

It's a beautiful thing.

You can't call Alibaba "small" today, but the China-based online retail specialist is just getting started.

The company already delivers annual sales of $27 billion, yielding $11.2 billion in earnings before interest, taxes, depreciation, and amortization profits, and free cash flow of $10.2 billion. And the business gears are only cranking faster. Sales rose by 53% year over year in the recently reported first quarter. At the same time, free cash flow surged 70% higher, and GAAP earnings nearly doubled.

That's one shareholder-friendly way to build a $440 billion market cap. But like I said, Alibaba is just getting started. Founder Jack Ma wants to expand his reach into areas currently ruled by traditional brick and mortar stores in the Chinese market, and international sales only account for about 6% of Alibaba's total revenue.

The untapped potential for further growth is downright staggering, and I can't wait to see how Ma develops his long-term vision across new markets. 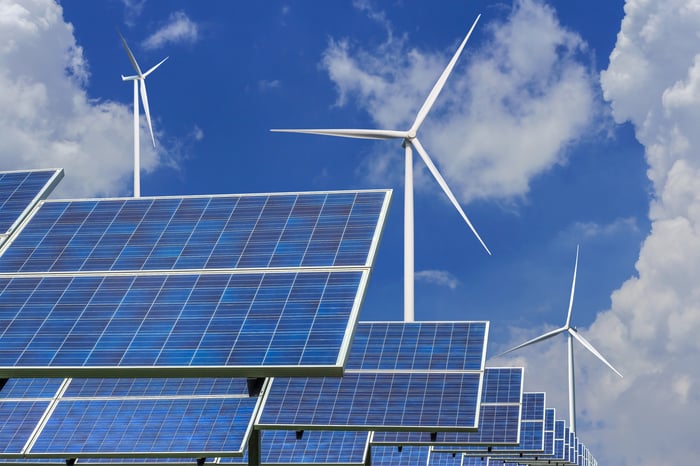 The volatile play on green energy

So far, you know Tesla as an electric-car company. In the not-too-far future, that will change.

Co-founder and CEO Elon Musk always saw the car strategy as nothing more than a first step towards a much larger ambition. Musk wants to change how we create, store, and consume energy on a global level, shifting everything over from fossil fuels to sustainable alternatives. No, really -- he said so 11 years ago and restated the same ambition last summer.

The long-term strategy will make Tesla a titan on the renewable energy stage, starting with a modest solar power and rechargeable battery ambition. The battery-powered cars provide an attractive way to boost demand for rechargeable batteries of large capacity, so Tesla is investing billions in battery factories these days. Other carmakers' jumping into the electric market can only be seen as a win for Tesla, which may soon start selling battery packs to its supposed rivals. It was never really about winning the car wars.

I'll admit that this is a risky strategy, but Musk has my full confidence as he navigates the uncharted waters that separate today's Tesla from a next-generation energy-production business. There will be speed bumps and potholes along the way, but I'm not selling as long as the larger vision remains in place.

If anything, my portfolio might add a few more Tesla shares the next time stock prices plunge on some unquestionably short-term panic trigger. Because you know there will be a few unreasonable panics in the road ahead.