Please ensure Javascript is enabled for purposes of website accessibility
Log In Help Join The Motley Fool
Free Article Join Over 1 Million Premium Members And Get More In-Depth Stock Guidance and Research
By Travis Hoium - Oct 3, 2017 at 8:18AM

Natural gas was supposed to be the next fuel for large buses and trucks, but that bright future might be dimming.

A few years ago, it seemed obvious that the bus and truck fleets in the U.S. would soon transition to natural gas. The fuel was less expensive than diesel, it's cleaner, and domestic supplies are plentiful. Making the switch was smart business and an environmental win.

But conditions in energy markets have changed rapidly since Clean Energy Fuels (CLNE 2.01%) was a hot stock on the market. Oil prices dropped by more than half and maybe most importantly there are big competitors to natural gas on the horizon. And these are competitors the entire natural gas fuel industry is going to have a hard time fighting. 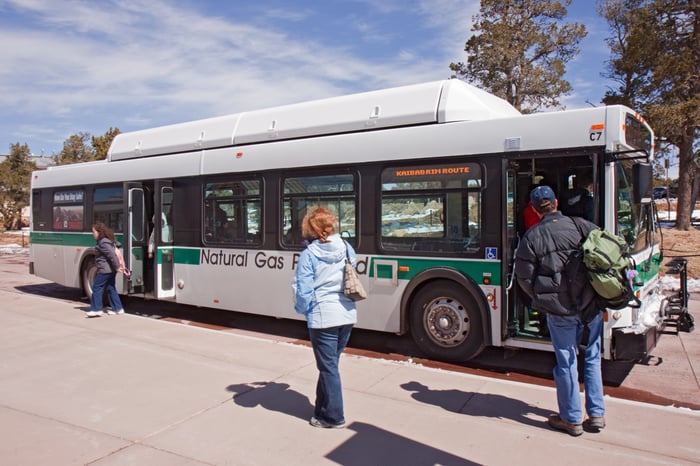 Natural gas buses are getting run over by electric buses

The problem is that electric buses have improved dramatically in the last few years and now offer a better value proposition to metro areas. Electric bus maker Proterra recently won contracts to sell buses to New York's MTA and King Country Metro, which serves Seattle and the surrounding area, among many other contracts. Plus, it demonstrated that its longest-range bus could travel 1,100 miles on a single charge -- albeit under ideal conditions. If the up-front cost of electric buses can be competitive (which it looks like they are today), they can tap into a much more available electricity infrastructure and lower energy costs. It's likely EVs will crush natural gas in the bus market.

Even electric semis are looking likely

Semis were supposed to be the long-term growth driver for Clean Energy Fuels, but now even that looks questionable. Tesla (TSLA 1.24%) says it will announce its plans for a semi later this month and Nikola says it will launch two hydrogen-powered semis in 2021.

Both battery and hydrogen technology may have a big advantage over Clean Energy Fuels' natural gas. Infrastructure will be easier to build out for both battery and hydrogen-powered semis, given the availability of electricity (which can be turned into hydrogen), compared to natural gas that Clean Energy Fuels has to build specifically at each fueling station. And the technology behind both is improving rapidly, so costs will likely come down further in the future.

Financials are deteriorating by the day

The competition from EVs and hydrogen trucks are part of what's challenging Clean Energy Fuels' financials today, but the challenge will get worse in the future. You can see below that revenue has plateaued and is starting to fall, so if adoption of natural gas vehicles doesn't pick up steam, the company will be in dire financial condition. 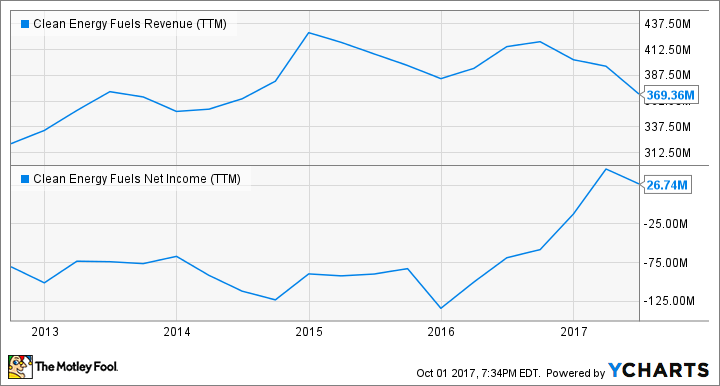 Given the competitive backdrop and weak financials, I don't think Clean Energy Fuels is a good buy given its position in the market. Unless natural gas makes a surprise turnaround in buses and trucking in coming years, the company may even have a hard time surviving.