"Acquisitions are contributing approximately one-third of our sales growth.
Since the beginning of 2015, we have completed seven acquisitions, which
are driving sales in both our consumer and industrial segments. We have
a robust pipeline of acquisition opportunities that meet the growing demand
for flavor and health. In addition to bolt-on opportunities, we are seeking
larger acquisitions. Geographically, our focus is on acquisitions that build scale
where we currently have presence in both developed and emerging markets."
--McCormick & Company 3rd Quarter 2017 "10-Q" earnings filing, 9/28/2017

In a time of uncertainty in the consumer packaged-goods (CPG) industry, McCormick & Company (NYSE:MKC) seems certain of a few things. The company is bent on maintaining a swift pace of innovation. Its launch of 40 new products this fall is geared toward foodies, from the introduction of beef and chicken-bone broths in its Kitchen Basics line to Japanese ramen and soba noodles within its Simply Asia label. And as the quote above illustrates, McCormick will assuredly keep up the pace of acquisitions that has enabled it to expand its top line during a period in which many CPG competitors are flatlining.

McCormick completed its mammoth $4.2 billion acquisition of Reckitt Benckiser's (OTC:RBGL.Y) food division, "RB Foods," on August 17th. In the company's third-quarter 2017 earnings report, shareholders can view the balance-sheet allocation of this price tag, which reveals the extent of management's desire to obtain market-leading properties like French's mustard and Frank's RedHot hot sauce, the two major condiments acquired in the deal. 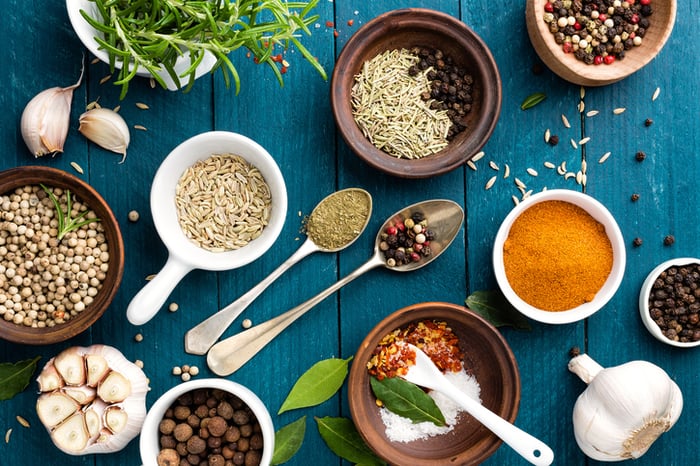 In the RB Foods deal, McCormick received, net of acquired cash, roughly $158 million in equipment, receivables, inventory, and other assets, while assuming $115 million of trade payables and other current liabilities. The organization also assumed $967 million in deferred tax liabilities and $20 million in "other" long-term liabilities. These assets and liabilities net into a total liability assumption of approximately $944 million.

Given a purchase price of $4.2 billion, can you guess which asset accounts were used to plug the $5.1 billion hole in the balance sheet? The sum is split more or less evenly between intangible assets and goodwill. In other words, McCormick paid $4.2 billion to acquire $5.1 billion of assets with no tangible value.

Now shareholders, before you protest in dismay, remember that the string of prior acquisitions mentioned above essentially enabled the company's nearly 9% revenue growth this quarter. Moreover, the RB Foods deal is expected to provide at least 5% accretion (improvement) to earnings per share within 12 months, not to mention the revenue opportunities at hand as McCormick will invest more in marketing the brands than Reckitt, a transatlantic owner, has done over the years.

McCormick has chosen to invest its capital rather than mollify investors with large share repurchases -- a questionable trend among CPG competitors that you can read more about here. Management is still on the lookout for acquisitions, even as the company ramps up new product innovation. A purchase as huge as the RB Foods buyout won't happen for a while, however.

Management estimates that McCormick's Debt-to-EBITDA ratio currently sits near 5.0, and it intends to bring this level down to a more prudent reading of 3.0 by 2020 by utilizing operating cash flow to pay down debt. Along the way, however, shareholders shouldn't be surprised to see more modest tuck-in purchases, as the company known for spices continues to invigorate shareholder value.