Chipotle (NYSE:CMG) was once a high-flying stock market darling that could do no wrong. That ended with its food-safety scandal in 2015, and the company has been struggling to recover ever since.

The chain's traffic has not rebounded, and its revenue remains well below where it was before the scandal. And even though it has regained some of its audience back -- revenue increased 22.1% to $2.24 billion through the first half of fiscal 2017 and comparable restaurant sales increased 12.5% -- investors remain skittish.

Even a small problem like the recent case of an employee coming to work while ill with norovirus can send the chain's stock plummeting. In that case, people did get sick, but it was not E. coli as it was the first time, and since Chipotle does offer its employees sick days, it was just one irresponsible worker.

The Mexican chain, at least in part because it marketed itself as having "food with integrity," has created its own trap. Every little blip will cause investors to panic, but ultimately, I believe its share price will recover. 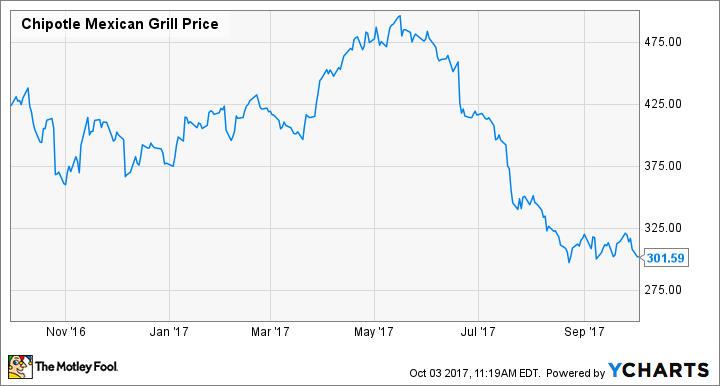 The product is still good

Chipotle created its business by offering a better burrito. It took fast-food Mexican offered by chains like Yum! Brands (NYSE:YUM) Taco Bell and elevated it. Whereas Taco Bell's food has always been tasty, but of questionable quality, Chipotle's used recognizable ingredients sourced locally when possible.

When you get beef at Chipotle, it looks like beef. The same is not always true at Taco Bell or various other fast-food Mexican joints. Instead of being an indulgence, or junk food, Chipotle can be a sensible dinner (albeit a caloric one if you are not careful). 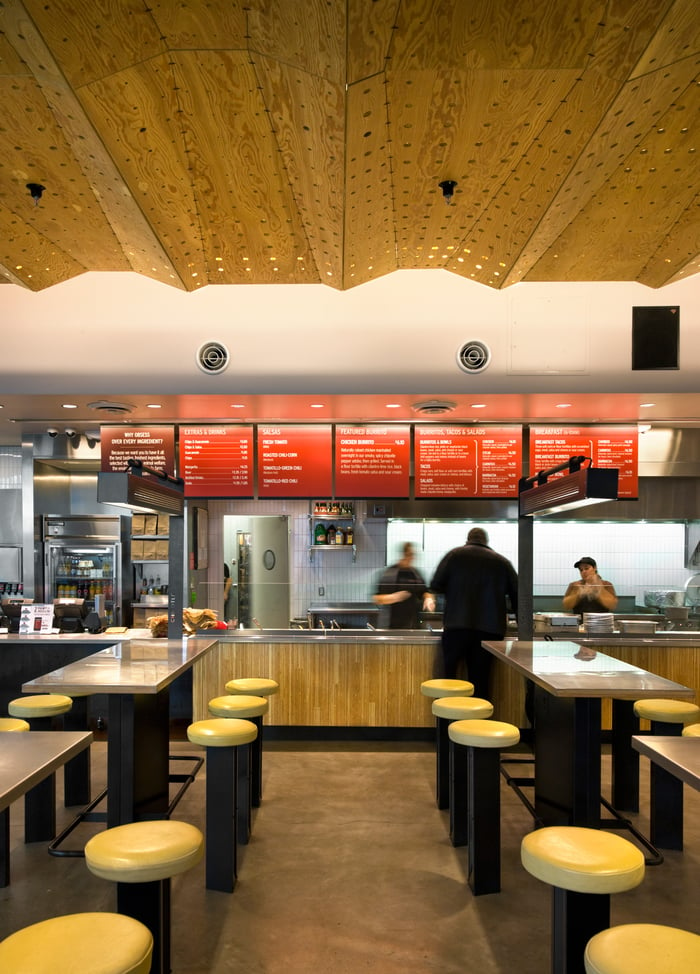 Chipotle still has a ways to go before it gets back all of its former audience. Image source: Chipotle.

Before the E. coli problem, Chipotle did very little to court customers. It didn't advertise on television, nor did it have a loyalty program. It also had done very little to improve service in its stores.

Seeing its steady upward climb reversed has created a more humble Chipotle. The company has run ads on TV and had a short-term loyalty program designed to reward its best customers while enticing them to visit more often. Perhaps most importantly, the chain has invested in its app and added a second production line in stores to facilitate mobile orders.

Those technical and in-store changes should have a big effect. Being able to order online and have your order made quickly should increase customer satisfaction and lead to the regular, walk-in line being shorter.

The company is listening

Chipotle had previously been a company that mostly ignored its customers. Its menu was pretty much fixed, with new ingredients being added very rarely.

Since the scandal, the company has added and dropped chorizo. It has also given into what it acknowledged was the most-requested item it did not have: queso. And while early reviews for the cheese topping/dip have not been good, the company has pledged to keep working on it and has shown that it values what its customers want.

A long road back

Every time someone sneezes in a Chipotle, it's possible that a news story will be written that will cause share its share price to fall. Eventually, though, memories will fade, and goodwill will be won back. That's not going to happen quickly, but good food and an improved attitude should eventually win the day for the Mexican chain.