I have little doubt that ten years from now Chipotle (NYSE:CMG) will still be around, serving up burritos to the masses. And with the stock now trading at its lowest level in nearly 50 months, you'd think now might be a good time to buy.

But I won't be snatching up shares anytime soon, and I think you should think twice about doing so as well. While the stock could be a winner, in the long run, that's far from a guarantee. What I know for sure right now is this: the company is fragile -- in many ways -- and that should give you pause. 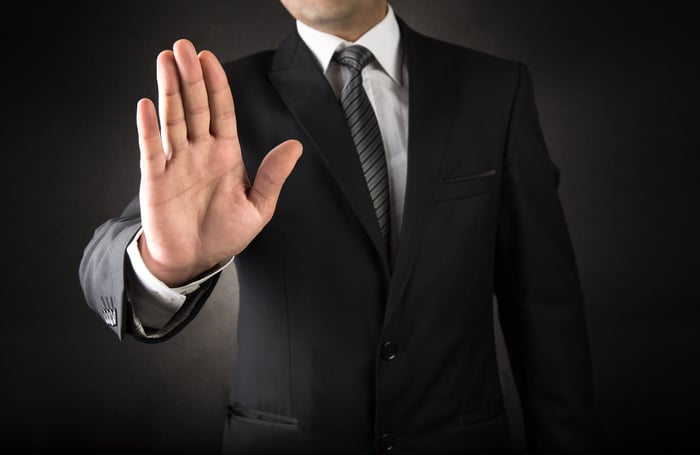 Chipotle's brand: the dangers of putting yourself on a pedestal

Best-selling author and former trader Nassim Taleb famously coined the term "antifragile," referring to something that becomes stronger as a result of time, chaos, volatility, and unforeseen events. In other words, it becomes stronger due to stress.

The opposite, of course, is to be fragile. And that's right where Chipotle has landed right now. Case in point: last July, an employee at a single Chipotle location came into work sick. As a result, a number of customers were infected with norovirus. In reality, this hardly represents a systemic failure on Chipotle's part -- the company has over 2,200 locations in the world, and this problem was very localized.

And yet, since then, shares of Chipotle are down a whopping 35%. That alone isn't a big deal, but it's the reasoning that's behind it: fewer people are going to visit Chipotle. The brand itself and "foodborne illnesses" are starting to become intertwined. And in the restaurant business, you're only as good as your brand.

Without a doubt, when Chipotle started out in Colorado, the "Food with Integrity" theme coincided perfectly with a larger national movement toward healthy eating. As the company gained popularity, the trust that customers had in Chipotle's integrity became greater and greater -- and the margin for error thinner and thinner.

Having put itself up on a pedestal, Chipotle could scant afford to have an illness scandal, but that's just what happened in 2015. Since then, comps have decidedly slumped, as have shares -- which are down 60% from all-time highs.

To understand just how fragile Chipotle is, consider this: over the next two to three years, Chipotle can't afford to have a single well-publicized food-borne illness outbreak. Whether it be truly the result of negligence, corporate espionage, or just an employee who comes to work when they should have stayed home, it could prove to be a death-blow to shareholders. That's what brand fragility looks like.

One of the things that kept Chipotle afloat after the outbreak began, was the company's over $1.5 billion of cash on hand in mid-2015, and absolutely no long-term debt. While the second-half of that scenario is still true, the first-half is not.

While Chipotle is admittedly moving in the right direction relative to where it was six months ago, it is still in a tenuous position.

And all of this ignores the fact that, despite all of the above-mentioned fragility, the stock still trades at a premium. Shares currently go for 63 times trailing earnings, and 52 times trailing free cash flow. That's just way too rich for a company in Chipotle's position.

Remember, moats in the restaurant industry are razor thin and provided by one key thing: brand. While Chipotle may have been a first-mover in the "better-for-you" food movement, it is hardly alone. There are a host of competitors out there with virtually identical offerings, sans the growing reputation for foodborne illness problems. Once those companies reach Chipotle's scale, the earnings multiple could contract significantly, and I don't want to be holding the bag if/when that time comes.