Please ensure Javascript is enabled for purposes of website accessibility
Log In Help Join The Motley Fool
Free Article Join Over 1 Million Premium Members And Get More In-Depth Stock Guidance and Research
By Brian Feroldi - Updated Oct 5, 2017 at 11:29AM

Positive results from an important phase 3 clinical trial fueled optimism about the biotech.

Powered by encouraging phase 3 results for an important pipeline drug, shares of clinical-stage biotech Alnlyam Pharmaceuticals (ALNY -1.15%), which focuses on RNAi treatments, gained 33% in September, according to data from S&P Global Market Intelligence.

While September turned out to a great month to be a shareholder, Alnylam actually kicked it off with some bummer news. Management announced it was halting all clinical development on Fitusiran -- a  treatment candidate for the blood-clotting disorder hemophilia -- after a patient died during one of its trials. That was an especially troubling update because less than a year ago, Alnylam abandoned its former lead drug candidate, revusiran, over safety concerns.

Traders were able to shrug off that bad news within a few days, after Alnylam and its partner Sanofi (SNY -1.17%) released phase 3 clinical data on a drug called patisiran, which is a hopeful treatment for hereditary ATTR amyloidosis (hATTR) with polyneuropathy. A rare disease, hATTR affects about 50,000 people worldwide, and currently has limited treatment options.

While the release was light on details, Alnylam did state that the 18-month study showed that patisiran met its primary endpoint with strong safety data. The two companies now plan to submit patisiran for FDA approval in late 2017, with international filings expected to follow in the first half of 2018.

This news was especially positive for shareholders because it shows that Alnylam's RNAi drug-development platform is the real deal. Given the big confidence boost, it is easy to understand why shares skyrocketed. 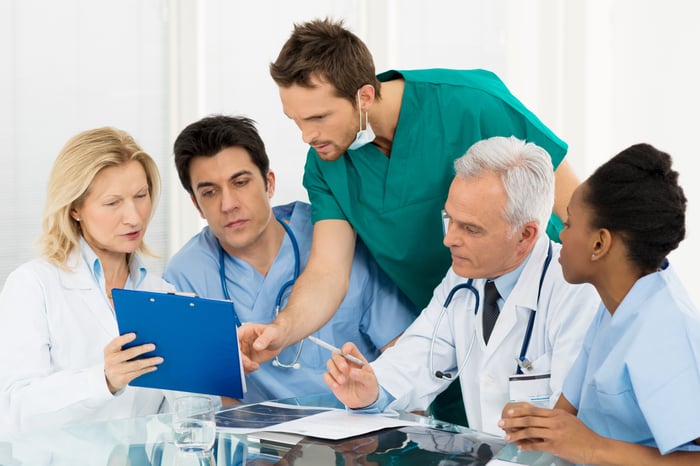 While patisiran looks promising, it is important for investors to realize that the drug won't likely enjoy monopoly status when it launches. Ionis Pharmaceuticals (IONS 0.61%) -- another biotech focused on RNAi drug development -- has a drug called inotersen that will be submitted for FDA approval later this year as a hopeful treatment for the same disease state. While patisiran's safety data is expected to give it an edge over inotersen, it would be a mistake to ignore the potential competition completely.

Rival treatments aside, if patisiran wins approval, it will still likely bring in hundreds of millions of dollars in revenue per year. Add in the potential of the rest of the company's pipeline, and there's reason to expect that this stock's bullish moves are just getting started.