Please ensure Javascript is enabled for purposes of website accessibility
Log In Help Join The Motley Fool
Free Article Join Over 1 Million Premium Members And Get More In-Depth Stock Guidance and Research
By John Rosevear - Oct 6, 2017 at 10:34AM

The new Chevy Equinox is a home run -- but a strike has the automaker at risk of running out of inventory.

The good: GM's all-new 2018 Chevrolet Equinox crossover is a bona fide hit. U.S. sales were 80% higher last month than a year ago, helping GM to an overall market-share gain for September.

The bad: Workers at the Canadian factory that makes the Equinox have been on strike for almost three weeks, supplies of the new crossover are getting tight -- and there's no resolution in sight. 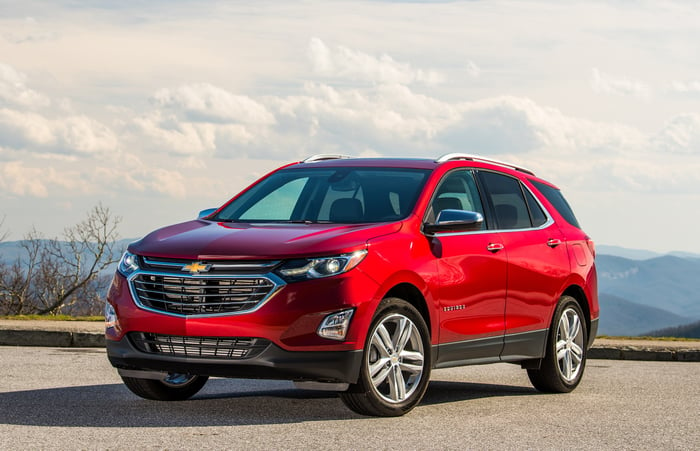 The new Chevrolet Equinox is a huge hit for GM. But a strike has already put the new model in short supply. Image source: General Motors.

A strike in its third week, with no end in sight

Workers at GM's CAMI Assembly Plant in Ingersoll, Ontario, walked out on Sept. 17 after talks with GM about a new contract broke down. They've been on strike since, with no immediate resolution in sight.

The issues in contention are somewhat complicated, but here's the gist: Unifor, the Canadian labor union that represents the roughly 2,750 hourly workers at CAMI Assembly, wants assurances that GM plans to keep the factory busy for years to come. GM apparently isn't willing to make those guarantees.

That has union leaders worried, and for good reason: GM has another factory that makes the Equinox for North American markets -- in Mexico. That Mexican factory also makes other GM products, and while its total output of Equinoxes is fairly small now, the fact that GM is building any Equinoxes in Mexico concerns the union. 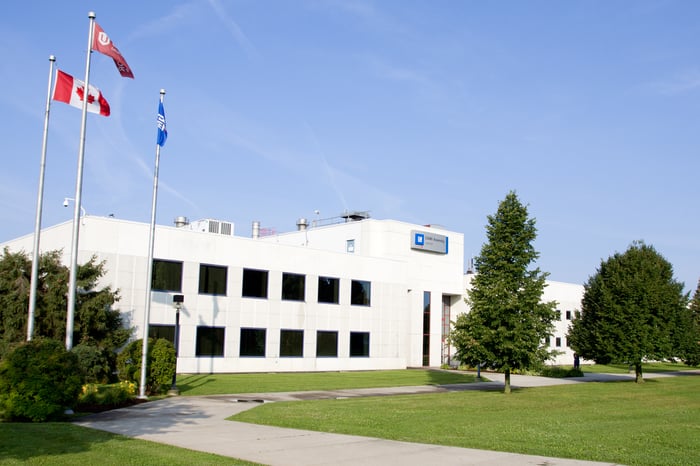 Union officials want GM to designate the CAMI factory as the "lead producer" of the Equinox. They've also asked GM to promise that the factory will get new products to build after the current-generation Equinox ends its production run.

Until that happens (or until union leaders decide to back down), Unifor Local 88 is on strike, and CAMI isn't making any Equinoxes at all.

And now, GM is running short.

Equinox inventories are already tight, and getting worse

Typically, automakers and analysts measure vehicle inventories by days' supply, which is exactly what it sounds like: The total number of vehicles on dealer lots and in transit to dealers, divided by the daily pace of sales.

For a hot new model like the Equinox, GM would probably like to have 60 to 70 days' worth in inventory, maybe a bit more. That's enough to ensure that most dealers have enough on hand (in different colors, with different option packages) to satisfy most buyers.

But GM was having trouble keeping up with demand for the new Equinox even before the strike -- and now, supplies are getting genuinely tight. 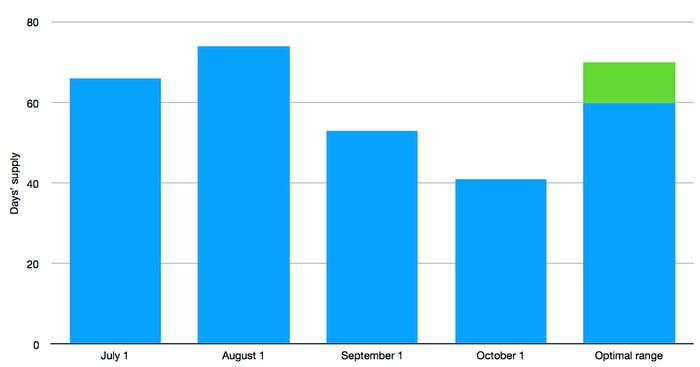 As the chart shows, GM was down to just 41 days' worth of Equinoxes in U.S. inventory as of the beginning of October.

That might still sound like a lot of Equinoxes, and it is -- 43,453, to be exact. Most Chevrolet dealers probably still have several on their lots, and some may still have a good selection. But buyers who have clear ideas about what they want might be getting frustrated: If you have your heart set on an all-wheel-drive Equinox LT in Cajun Red (for example), you might have to try half a dozen dealers before finding one -- and when you find a dealer that has one, it might be a long drive away.

Not all potential buyers will be wiling to go to such lengths, especially if the local Ford dealer is willing to offer a good price on a red all-wheel-drive Escape that they can drive home today. (And it's a safe bet that lots of Ford -- and Toyota, Honda, and Nissan -- dealers will be very happy indeed to welcome frustrated Equinox shoppers.)

You see the problem. Even though GM's dealers still have thousands of Equinoxes, the tight inventories put GM at risk of losing sales. That in turn could disrupt the momentum it has built behind this important new product.

The upshot for investors: This will soon get expensive for GM

Simply put, if GM genuinely starts to run short of Equinoxes, that will hurt sales and GM's bottom line -- and possibly, its stock price.

It's rare for a strike against an automaker to last this long nowadays. Typically, the stakes are high enough for both sides that a compromise is quickly found. Workers can't afford to go without pay for very long, and the automaker doesn't want to lose more than a few days' worth of production. Usually, a short walkout is enough for workers to feel that they've made their point, and for the automaker to give some concessions.

This strike hasn't worked out that way. From the outside looking in, it seems like Unifor has GM over a barrel: The Equinox is a critical, high-volume product; demand is very strong; GM's Mexican factory can't come close to meeting demand by itself; and inventories are getting thin. But the fact that GM hasn't given in to the union's demands suggests that the union's concerns have merit -- and that GM might have a plan B in the works.

It will be a bitter victory for Unifor if the strike ends up forcing GM to boost Mexican production of the Equinox. But either way, it's already a headache for GM -- one that runs the risk of becoming expensive soon.