Reversing course from the summer, during which the stock fell 17%, shares of Triumph Group (TGI 2.78%), a global leader in aerospace components and solutions, rose 13% in September according to S&P Global Market Intelligence. Besides two announcements that Triumph Group made during the month, news pertaining to government spending pleased investors and sent the stock soaring.

Triumph announced that Boeing (BA -1.25%) has selected the company as a major supplier for its T-X Air Force training jet. Uniquely designed for the Air Force training mission and as a replacement for the aging fleet of T-38 aircraft, Boeing's T-X is not a prototype; in fact, it is currently ready for production. The Air Force is expected to announce the contract award by the end of the year. According to Triumph's press release, the "initial acquisition, for 350 aircraft and the associated ground based training and support, is valued at up to $16 billion." 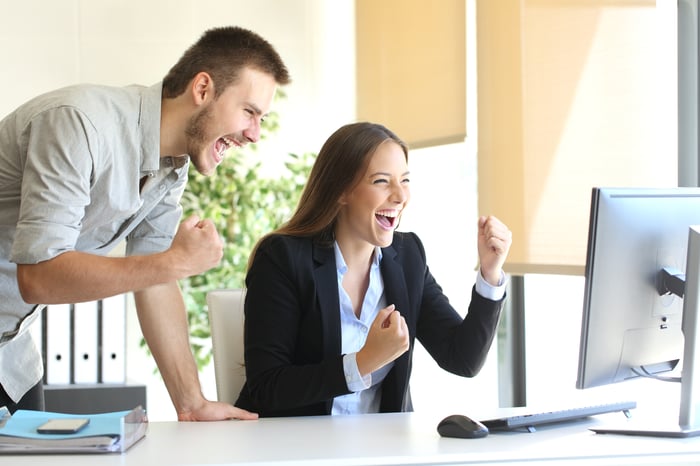 Growing their relationship even more, Triumph announced it had signed an agreement with Boeing to continue providing the environmental control systems (ECS) for several aircraft: 737 (legacy and MAX), 767, 777X, and 787 planes. Triumph, which already provides the ECS ducting and floor panels, will now provide the components into the 2020s.

Perhaps the most encouraging news for Triumph's investors didn't come from the company itself but from Washington, D.C. Affirming its support of the military, the Senate passed a nearly $700 billion defense bill, exceeding the one from the House by about $4 billion. The Senate bill is an auspicious sign for Triumph as it authorizes $640 billion in base military spending -- more than the base military spending cap of $549 billion for fiscal year 2018.

Although House and Senate members must iron out the differences between their bills before the final legislation is passed, there is clear, bipartisan support for defense spending. Certainly, this is an encouraging sign for investors since the military plays a prominent role in Triumph's business. In fiscal year 2017, for example, the military accounted for 22% of sales -- less than the commercial end-market but more than the remaining three end markets, combined.

Additionally, the deals with Boeing and Washington, D.C.'s apparent commitment to defense spending should assuage investors' fears of Triumph's backlog, which shrank approximately 4.2% from fiscal year 2016 to fiscal year 2017.