The bidding war for the privilege of hosting Amazon's second headquarters is sure to result in billions of dollars in tax savings for the company.

You could call it "The Corporate Bachelor" or the Amazon (AMZN -0.21%) Olympics.

The e-commerce giant announced earlier this month that it was opening its search for a second headquarters, dubbed HQ2, to match its Seattle base, saying it expects to invest $5 billion in said facility over the next decade, and hire 50,000 people for high-paying jobs.

Amazon asked local and state governments to respond to its Request for Proposal. Now, cities big and small are lining up to grovel at the feet of CEO Jeff Bezos.

According to a report in The New York Times, Tucson sent a 21-foot Saguaro cactus as a gift to Amazon, though the company gave it to a museum. Other cities like Tulsa and Detroit have set up "war rooms" with dozens of people working on Amazon proposals. Even burgs like Danbury, Connecticut, Frisco, Texas, and Ottawa, Ontario, have gone to great lengths to serenade the e-commerce giant. 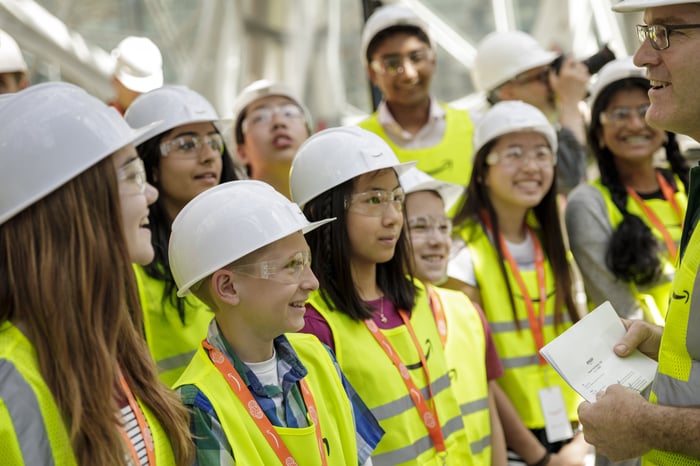 The criteria Amazon offered in its press release were simple: It prefers metro areas with more than 1 million people, a stable and business-friendly environment, urban or suburban locations that can attract strong technical talent, and communities that think big and creatively about location and real estate options.

In the formal Request for Proposal document, Amazon added a number of other specifications and stated that "incentives offered ... will be significant factors in the decision-making process."  It asked for specifics on incentive programs, noting: "The initial cost and ongoing cost of doing business are critical decision drivers."

Not surprisingly, municipalities indicated they had no objection to doling out incentives. For example, Tulsa Mayor G.T. Bynum told the Times he "doesn't worry at all" about offering too many incentives, adding, "Whatever it takes."

However, this is essentially a game in which Amazon wins simply by convincing cities to play, while the taxpayer loses. This company needs to build a secondary hub because it's growing so fast, and it's already going have to add those 50,000 jobs somewhere. By making the question of where into an open competition, it can milk the highest bidder for a boatload of tax incentives.

The process is reminiscent of Foxconn's earlier announcement that it planned open an LCD screen factory in the U.S.: That news elicited proposals from seven states. Wisconsin "won." However, despite gaining a manufacturing site expected to employ about 13,000 people, analysts say it will take the Badger State 25 years to break even on the $3 billion in incentives it had to offer to get it.

A master of tax avoidance

Throughout its history, Amazon has been adept at avoiding taxes. For years, the company operated warehouses in only a handful of states so it wouldn't have to collect sales taxes from most of its customers. That strategy gave it an advantage over brick-and-mortar retailers, and helped it establish a foothold when it was much smaller. Today, it collects sales tax from customers in every state that charges one.

Similarly, by operating at close to breakeven throughout its history, it has been able to avoid corporate income taxes. Since 2008, Wal-Mart (WMT -0.28%) has paid $64 billion in corporate tax, compared to just $1.4 billion from Amazon, giving the e-commerce titan a significant advantage over its chief retail rival.

With this incentive bidding war, Amazon has picked up yet another edge. While such deal-sweeteners are commonly offered for new factories and plants, they're only given to companies of a certain size. Small retailers have no such leverage with the tax collector, and are left on an even less level playing field.

It's easy to see why cities are prostrating themselves before Amazon; the economic impact it's promising has the potential to re-energize a city much in the way it's done with Seattle. But those jobs and Amazon's growth don't come in a vacuum. As Amazon expands, much of the brick-and-mortar retail industry is collapsing around it in a phenomenon that is commonly described as a "retail apocalypse." Toys R' Us, for instance, just declared bankruptcy, putting 64,000 jobs in jeopardy.

For Amazon investors, this command performance is yet another win, and further evidence of its brand halo. But beyond that, the HQ2 competition raises the question again of whether corporate welfare in the U.S. has gotten out of hand.