Can the younger challenger knock out its 167-year-old predecessor?

PayPal surged nearly 70% this year, while American Express rallied more than 20%. Does that difference indicate that internet-based payment networks are now overtaking traditional card-based ones? Or is American Express a better value play with more upside potential? PayPal owns the biggest online payments network in the world. Its total number of active accounts grew 12% annually to 210 million last quarter, total transactions grew rise to 1.8 billion, and each active account made an average of 32.3 transactions over the past 12 months -- a 10% increase from the prior year.

PayPal has been expanding its ecosystem with big acquisitions, including Braintree, which owns the peer-to-peer payments app Venmo; Paydiant, which develops mobile wallet services; Xoom, which specializes in overseas remittances; and the cloud-based bill payments processor TIO Networks. 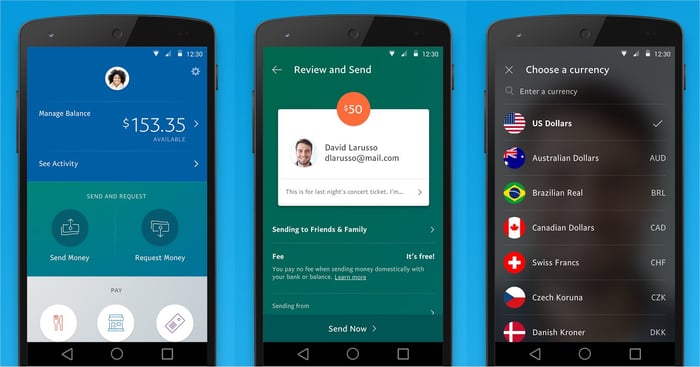 American Express processes "millions" of transactions daily for its cardholders. It also offers business services that help small business owners maintain their finances, commercial payment tools that help companies control costs, marketing and management insight services, and a travel network for its cardholders. It previously tried to challenge PayPal with its Serve mobile app and Amex Express Checkout for websites, but those efforts haven't made much of a splash.

The average American Express customer spends about $1,700 per month according to a Morgan Stanley report from 2015. That's more than double the average monthly spending of a Visa (NYSE: V) or Mastercard (MA 1.64%) cardholder. That figure has consistently risen, with its adjusted Card Member spending rising 8% annually last quarter.

How fast are PayPal and American Express growing?

PayPal's total revenue rose 18% annually to $3.1 billion last quarter, or 20% on a constant currency basis. Its total payment volume rose 23% annually, or 26% after excluding currency impacts. On the bottom line, its GAAP and non-GAAP earnings both improved 27%.

PayPal secured a lot of partnerships after being spun off of eBay in 2015. Last quarter, it announced new partnerships with industry juggernauts like Baidu, Visa, and Bank of America, indicating that it was still the go-to name for online payments. Analysts expect PayPal's revenue and non-GAAP earnings to respectively rise 19% and 23% this year.

But on the bottom line, American Express' diluted earnings plunged 30% annually due to its loss of Costco (COST 0.71%) to Visa and Citigroup's Citi (both PayPal partners) last year. Looking ahead, analysts expect American Express' revenue and earnings to respectively rise just 3% and 2% this year.

PayPal is obviously a higher-growth stock than American Express, but it's also valued accordingly. PayPal trades at 52 times earnings, which is much higher than the industry average of 24 for payment services providers. Its forward P/E of 29 looks cheaper, but that ratio remains higher than its projected earnings growth for next year.

American Express trades at 19 times trailing earnings and 14 times forward earnings. Unlike PayPal, which doesn't pay a dividend, American Express pays a forward dividend yield of 1.5%, which is supported by a low payout ratio of 26%. It's also raised that payout annually for five straight years.

As I stated in a previous article, I like PayPal's business model but dislike its valuation. I'll consider buying PayPal on a pullback, but there's too much optimism is baked in at current levels.

American Express doesn't seem that compelling either, but the stock is cheap and its growth should accelerate as its Costco-related headwinds fade. Therefore, if I had to buy one of these stocks now, I'd stick with American Express instead of PayPal.