NVIDIA (NASDAQ:NVDA) is on track -- or perhaps we should say on a flight path -- to conquer the small unmanned aerial vehicle, or drone, space. Within the past month, the graphics-chip specialist has scored two notable artificial-intelligence (AI) wins in this realm.

This is a great news for investors, because the drone space is already rapidly growing -- research firm Gartner estimates that the global civil drone market grew 36% to $4.5 billion last year -- and is widely expected to explode in size in the coming decade, as companies increasingly adopt drones for deliveries, industrial inspections, and agricultural, entertainment, security, and other purposes.

It seems to largely fly under many investors' radars that along with driverless cars and trucks, NVIDIA's graphics processing units-based approach to deep learning -- a burgeoning category of AI in which a machine is trained to make inferences from data as we humans do -- can also be used to smarten up drones. 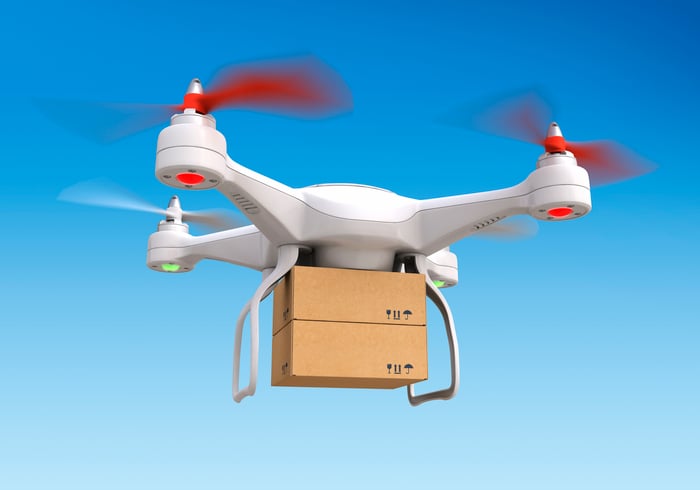 Drone delivery is coming -- and NVIDIA is poised to profit

This partnership presents a huge opportunity for NVIDIA, as JD.com is the second-largest online retailer behind Alibaba in the fast-growing Chinese market. Moreover, the company is 12.1% owned by Wal-Mart -- which has steadily been increasing its stake -- suggesting to me that if JD.com is pleased with NVIDIA's products, the world's largest retailer could adopt the company's AI for its drone deliveries in the future.

JD.com's innovation lab, JD X, has created two delivery vehicles. JDrover is a 4-wheeled robot that JD X is testing for so-called "last-mile deliveries" on college campuses. Turning to JDrone, which is our focus, JD X has launched a pilot program in various Chinese provinces, including Beijing, to use the drones for delivery, agricultural, and search and rescue applications. The lab estimates that it will release more than 1 million drones over the next five years.

Thanks to Jetson's high performance, low power consumption, small form factor, and advanced vision abilities, JDrones sport impressive capabilities. They can currently fly at up to 100 kilometers per hour, or about 62 miles per hour, and deliver packages weighing up to 30 kilograms, or about 66 pounds. Early test results have been terrific: JD.com has been able to reduce its logistics fees by 70% in rural areas, which have presented a challenge for e-commerce companies because of poor transportation infrastructure.

Within the next decade or even sooner, it should be a common sight to see drones darting through the skies carrying packages, according to many industry watchers. Despite some challenges, the super-fast speeds at which some consumers will be able to receive their online orders by drone promises to make it a popular delivery method. Amazon.com, for instance, touts that once regulations allow it to roll out Prime Air, the drone service will deliver packages weighing up to 5 pounds within 30 minutes. 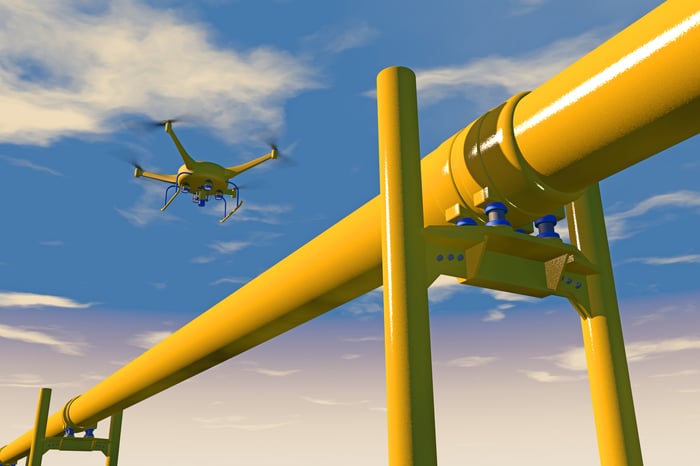 Early last month, NVIDIA and Avitas Systems, a General Electric (NYSE:GE) venture, announced that Avitas will use NVIDIA's AI to optimize its use of drones and other robotic forms for industrial inspections.  Specifically, Avitas is using NVIDIA's DGX-1 AI supercomputer for AI training and inferencing in the data center, and -- because high-speed connectivity to data centers can sometimes be out of reach -- it's also using NVIDIA DGX Station right at the inspection location for making inferences from the video and images obtained by the drones and other robots.

Globally, industrial companies reportedly spend about $40 billion per year to inspect their physical assets, and select huge companies can spend upward of $100 million every year on their industrial inspections. Of course, drones and other robotic forms aren't likely to entirely replace humans for all industrial inspections, so the total addressable market should be less than $40 billion. In addition to size, the fairly non-elastic nature of this market makes it attractive. Many industrial companies can't lessen their inspection efforts without falling afoul of regulations and/or risking serious or even catastrophic consequences.

Drones are not new, as the military has used them for some time. However, thanks to several factors, including rapidly decreasing costs and a vast improvement in sensors and AI computing power in recent years, the applications for civil drones are already expanding and are expected to explode as regulations around the globe -- particularly in the U.S. -- become more favorable.

While projections for the drone market vary quite a bit by source, Gartner estimates that global revenue from sales of drones for the civil market will grow 34% to $6 billion in 2017 and then nearly double to $11.2 billion by 2020.

While it's still early in the game, NVIDIA is positioning itself to profit from the fast-growing drone space.