Shares of the wholesaler dipped after its recent earnings report despite strong numbers, a sign investor sentiment is turning against the stock.

There's a retailer that just posted a 5.7% increase in adjusted comparable sales, along with a 17.5% jump in earnings per share and a 15.8% increase in revenue, albeit aided by an extra week in the quarter.

The company beat estimates on both top and bottom lines, yet the stock fell as much as 6.3%. Under normal circumstances, this stock would be soaring, but that's not the case in today's retail environment, especially when you're Costco Wholesale (COST 1.33%), facing off against a supercharged Amazon.com (AMZN 1.12%) and a resurgent Wal-Mart (WMT 5.11%).

No way to win

At a time when brick-and-mortar and mall-based retailers are seeing comparable sales plummet and rare is the retailer that is even able to grow same-store sales, Costco's performance is remarkable. The company benefited from an increase in membership fees earlier in the year, but there's no question that its buy-in-bulk membership model continues to perform. Despite intense competition, shoppers are still flocking to the warehouse wholesaler for its rock-bottom prices and unique shopping experience.

But investors don't seem to care. Costco shares are down 2% year-to-date, compared to a 14% increase for the S&P 500, and the stock has fallen 13% since Amazon announced it would buy Whole Foods. 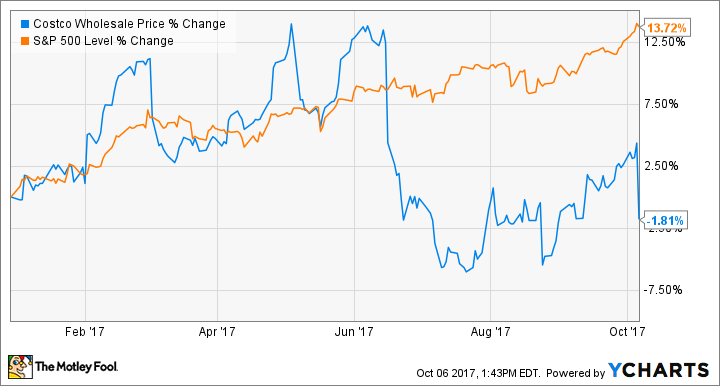 Costco faces a catch-22. More so than most retailers, the company's model translates poorly to the online world. Much of its sales come in the fresh and frozen foods format, which are difficult to deliver, and it relies on the "treasure hunt effect" to pad sales as a portion of its merchandise is constantly rotating. Shoppers can only make such impulse purchases when they are in the stores.

Additionally, the company operates on a bare-bones model in order to keep costs and prices low. It eschews advertising and displays merchandise on pallets inside industrial warehouses. Its margins are too thin to absorb the additional costs the company would need to take in order to aggressively move into e-commerce.

Still, Costco trades at a premium compared to brick-and-mortar competitors like Wal-Mart and Target so its earnings multiple is likely to compress until the company can demonstrate more sustainable growth through e-commerce or other growth initiatives.

Steps in the right directions

For the first time ever, Costco reported e-commerce growth in its earnings release, posting 21% growth in the quarter and a 13% increase for the year, however, the dollar amount of online sales was not reported.

Management also announced two initiatives that show the company is getting serious about e-commerce. First, it has launched a platform called Costco Grocery, which offers two-day delivery for non-perishables and sundries with free shipping on orders over $75. Second, Costco is now offering delivery through Instacart at 376 of its U.S. stores with more to come. Through Instacart, Costco offers same-day delivery of dry and fresh goods.

Those moves should help drive increased sales and offer some reassurance for investors, however, in terms of technology and delivery infrastructure, Costco is still worlds behind Amazon and that is unlikely to change.

CFO Richard Galanti spent much of the recent earnings call responding to questions about slowing membership growth or increased competition from Amazon, and Costco's numbers should inspire investors.

However, the elephant has entered the room, and it's not leaving. Until investors feel more confident that Costco can defend itself against Amazon Prime especially with the combination of Whole Foods, the stock is likely to languish, and there's little Costco can do about that.