Don't expect new features or hardware for the mobile platform.

Just a few months after Microsoft (MSFT 1.07%) officially killed Windows Phone 8.1 while presumably turning its attention to the newer Windows 10 Mobile, Microsoft exec Joe Belfiore (who used to run the Windows Phone platform) has confirmed in a series of tweets that Microsoft has ceased developing new features and hardware for the beleaguered smartphone platform.

There were never enough users

The reason for the decision is pretty obvious: Microsoft was never able to successfully build a viable mobile platform that could attract both users and developers alike. The company was never really able to overcome its deficiency in app availability, though not for a lack of trying.

We have tried VERY HARD to incent app devs. Paid money.. wrote apps 4 them.. but volume of users is too low for most companies to invest. ☹️ https://t.co/ePsySxR3LB

Third-party developers and companies were better off focusing their own development resources on Android and iOS, which commanded 99.8% combined share of the global smartphone market in the second quarter, according to Gartner. Belfiore even conceded that he had personally switched away from Windows 10 Mobile, presumably to Android. Last month, Bill Gates also admitted he had switched to Android (but it's loaded up with Microsoft apps).

(2/2) As an individual end-user, I switched platforms for the app/hw diversity. We will support those users too! Choose what's best 4 u. https://t.co/LKQBL3w7gA

None of this should come as a surprise. Windows Phone and Windows 10 Mobile have been circling the drain for years, and Microsoft is finally admitting defeat once and for all. Microsoft only beat on earnings last quarter because it finally realized massive tax benefits from winding down its phone operations, which took about two years to complete and resulted in thousands of layoffs. 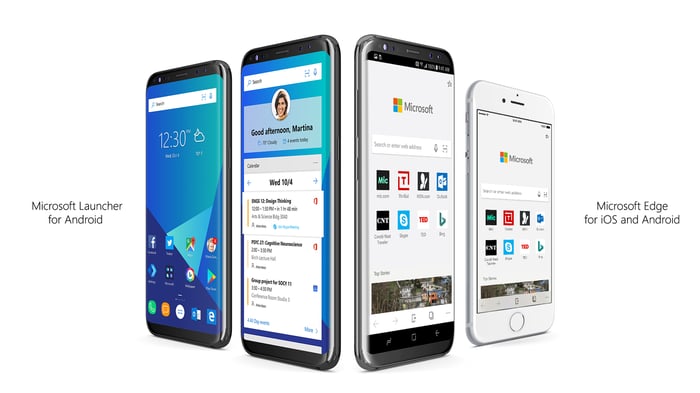 Microsoft Launcher for Android, and Edge for iOS and Android. Image source: Microsoft.

In fact, Microsoft has been implementing the same strategy as its third-party developers for a while: investing in developing Android and iOS apps. This is absolutely the right call, since there's really no need for Microsoft to keep fighting a losing battle if it can just as easily find success in extending its software to these other platforms.

Office is certainly the main cash cow, with 27 million Office 365 consumer subscriptions (not including the commercial side, which saw Office 365 revenue jump 44% on a constant currency basis), and offering Android and iOS versions of the suite has powerful retentive effects. Just a few days ago, Microsoft announced that it would bring its Edge browser to iOS and Android, and introduce a Microsoft Launcher for Android.

It's a tough pill to swallow, but ultimately focusing on cross-platform support for its most profitable software products is the best strategy here.