Please ensure Javascript is enabled for purposes of website accessibility
Log In Help Join The Motley Fool
Free Article Join Over 1 Million Premium Members And Get More In-Depth Stock Guidance and Research
By Rick Munarriz - Oct 10, 2017 at 10:24AM

The enterprise cloud platform provider fumbled its IPO, and it's gone on to lose a vital executive, post a brutal quarterly report, and trigger a wave of analyst downgrades. You can do a lot of damage in three months.

There have been a lot of hard-hit debutantes this year, and one of this year's biggest IPO disappointments is Tintri (NASDAQ: TNTR). The provider of enterprise cloud solutions went public at $7 in late June, and it's been largely downhill ever since.

Sluggish demand for shares just ahead of the IPO and a brutal quarterly report have doomed Tintri. The past few weeks have been laden with analyst downgrades and corporate litigation firms drumming up support for class action lawsuits to recover stock losses. It's been a rough run for investors trying to call bottom on a stock that keeps sliding. Tintri stock has fallen every single month in its brief tenure as a public company, surrendering 56% of its value along the way. 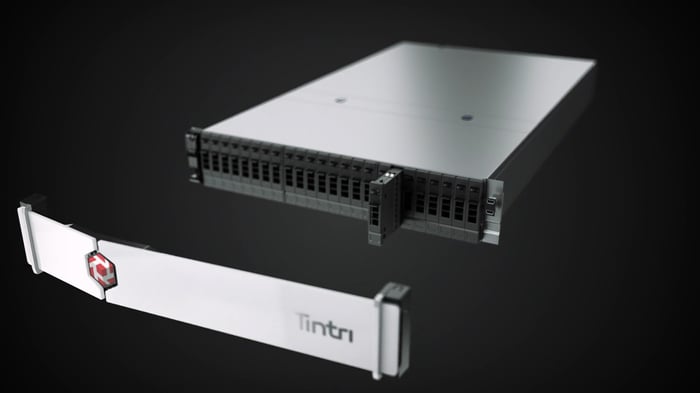 Tintri is a growing but profitless provider of an enterprise cloud platform consisting of cloud management software, web services, and flash storage systems. Its list of 1,400 clients includes 20% of the Fortune 100. However, it proved to be a hard sell for underwriters earlier this year.

Tintri's initial pricing range of $10.50 to $12.50 didn't drum up interest among institutional investors. Tintri had to reduce the number of shares being offered from 8.7 million to 8.5 million, and its pricing range was lowered to between $7 and $8. The stock wound up pricing at the low end. It wasn't low enough.

Analysts chiming in four weeks later would chime in with mostly bullish initiations, but many of those firms were involved in taking Tintri public. The good times would end there.

The first red flag came in mid-August when Tintri revealed that its Chief Sales Officer was leaving the company. Executives leave, but it's just a bad look when it happens just weeks after an IPO. A few days later Morgan Stanley downgraded the stock.

Morgan Stanley's Katy Huberty was one of the lead underwriters, and a month earlier had initiated coverage with an Overweight rating and a $10 price target. Huberty had high hopes for Tintri's virtualization-aware storage products and its potential for premium margins given its differentiated solutions. Shortly after the exec departure Huberty changed her tune. She downgraded the stock, slashing her price target to $6. She feared the risks associated to Tintri's sales organization in light of the executive departure, potentially leading to disruptions in sales and team productivity.

There is nothing as crucial for a fresh IPO as its first quarterly report as a public company, and Tintri flunked out last month. Revenue rose 27% to $34.9 million, just short of Wall Street expectations. Tintri's adjusted loss declined slightly on a per-share basis, but only because of all of the new shares.

Tintri bragged about landing the largest order in its history during the quarter, but that wasn't enough to offset its disappointing guidance. It's expecting revenue to clock in between $36 million and $37 million, a modest sequential uptick and just 8% growth over the $33.9 million it delivered a year earlier. Analysts were targeting $42.8 million. Four of the analysts that had initiated coverage of Tintri with bullish calls in late July were downgrading the stock just two months later.

Broken IPOs are everywhere these days. Tintri is going to have a long road back, and if it gets back even to its June IPO price it will have more than doubled for its new shareholders. The problem is that it's going to take a long time to win back the market's confidence. Tintri blew it in its first quarter, and it may take several strong quarters before it can earn the market's faith.