Please ensure Javascript is enabled for purposes of website accessibility
Log In Help Join The Motley Fool
Free Article Join Over 1 Million Premium Members And Get More In-Depth Stock Guidance and Research
By Brian Orelli, PhD - Updated Oct 12, 2017 at 9:28AM

Investors were excited about the initial public offering of this obesity-drug biotech.

In a sure sign that the biotech bull market is alive and well, Rhythm Pharmaceuticals (RYTM 3.61%) raised almost $120 million at $17 per share in its initial public offering on Thursday. In its prospectus with the U.S. Securities and Exchange Commission, the biotech said it expected to raise $115 million at between $14 and $16 per share.

Investors buying on the open market thought the IPO buyers got a steal even at their upsized price, sending shares of Rhythm Pharmaceuticals up 76% on its first day trading on the Nasdaq. Shares have since pulled back, but are still trading well above the IPO price.

Not much to go on

The first two patients had pro-opiomelanocortin (POMC) deficiency, a rare genetic disorder that causes obesity due to hyperphagia -- abnormally high appetite for food -- at an early age; Rhythm estimates the disorder affects between 100 and 500 patients in the U.S. One patient started treatment at 341.7 pounds and lost 112.4 pounds over 42 weeks of treatment with setmelanotide; the second patient started at 336.9 pounds and lost 45.2 pounds over 12 weeks of treatment. Importantly, the hyperphagia was reversed in both patients, going from baseline scores of 9 or 10 on the 10-point Likert scale -- where 0 is no hunger and 10 is extreme hunger -- to scores of 0 or 1. Both patients stayed on treatment and continued to lose weight.

Three other patients had leptin receptor (LepR) deficiency, an obesity-causing disorder with similar symptoms to POMC that Rhythm thinks affects between 500 and 2,000 patients in the U.S. One patient lost 21.6% of his body weight over 27 weeks; a second lost 11.4% over 36 weeks; a third, a 14-year-old girl, lost 8.3% of her body weight over 13 weeks. Unlike the POMC patients, their Likert hunger scores didn't fall as consistently; the scores went down, but the first two patients rebounded to scores of 5 and 6, which is still better than being extremely hungry.

The final five patients had Bardet-Biedl syndrome, which like the other diseases is an orphan indication, with an addressable population of 1,500 to 2,500 patients in the U.S. The genetic disorder also causes severe obesity and hyperphagia, as well as vision loss, polydactyly (extra fingers or toes), and kidney abnormalities. Four patients in the phase 2 trial lost between 7.9% and 9.7% of their body weight. A fifth patient didn't lose weight, but her appetite decreased and she had better control of her blood sugar. 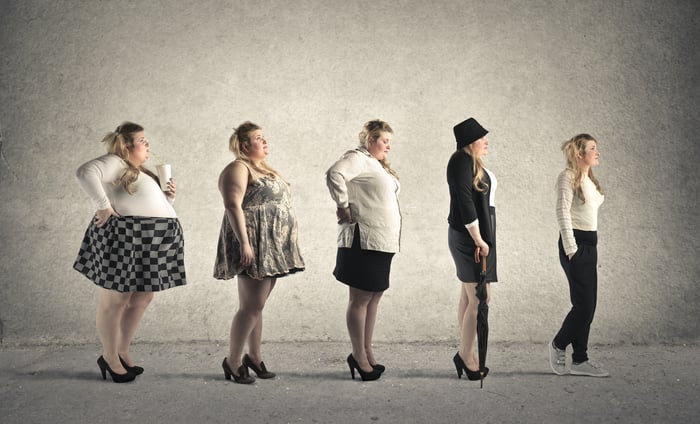 Nine patients is a pretty small number to draw any firm conclusions, but even if that level of weight loss is at the high end of what the average patient could expect, it seems safe to assume that efficacy isn't going to be a major problem once Rhythm tests setmelanotide in more patients.

The bigger issue with valuing a company based on nine patients is on the safety side. A side effect seen in only 10% of patients might not be observed in that small a population. Because these are life-threatening diseases with no approved treatments, the Food and Drug Administration is likely to give some leeway on the side-effect profile. But there's still risk of setmelanotide never making it to market, despite the promising early efficacy data.

Just ask investors in Zafgen (ZFGN), which was testing beloranib in Prader-Willi syndrome, another rare obesity disease for which Rhythm has also tested setmelanotide (although it was a short four-week trial with limited data). Beloranib's efficacy data looked great until a patient died in its phase 2 trial, and the program was eventually scrapped.

In May, Rhythm started testing setmelanotide in patients with POMC, in a phase 3 trial that it expects will complete enrollment by the end of 2017, putting it on pace to report phase 3 results in the first half of 2019. A trial in LepR is set to begin before the end of the year, with enrollment expected to be completed in 2018. Finally, Rhythm is also planning on moving forward into a phase 3 trial for Bardet-Biedl syndrome next year, after it reports full data from the phase 2 trial in the fourth quarter.

As part of the Bardet-Biedl phase 2 trial, Rhythm is also enrolling patients with another obesity disease called Alstrom syndrome and a pair of POMC-related diseases; that should begin to produce preliminary data in the first half of 2018. And there's a possibility of running an additional, longer, phase 2 trial in patients with Prader-Willi syndrome, although Rhythm hasn't made a firm decision yet.

Finally, Rhythm is working on an extended-release formulation of setmelanotide, which seems able to be injected weekly. The convenience would be nice for patients with these genetic orphan indications, though most would be happy to inject themselves daily if it helped treat their disease. The real benefit from an extended-release formulation would come if Rhythm were to move into the general population of obese patients: Setmelanotide would have to compete against other obesity drugs, most of which are taken orally.

At a market cap around $700 million, Rhythm is trading at a good price -- assuming setmelanotide makes it to market for multiple indications, which should allow the drug to register sales at least in the $1 billion range annually. Quadrupling (or more) from here is a reasonable expectation.

Handicapping the likelihood of an approval is difficult, though, given the small number of patients on whom the biotech has tested setmelanotide. Rhythm Pharmaceuticals is really only appropriate for risk-tolerant investors who can afford to lose a large chunk of their investment if the drug's efficacy and safety can't be replicated in phase 3 development.

Here's Why Rhythm Pharmaceuticals Inc Rose as Much as 37% Today