The FDA puts a clinical hold on the biotech's lead drug.

What: It's been one hell of a week for Zafgen (ZFGN).

Monday and Tuesday shares were down on worry that bad news was coming.

On Wednesday, the biotech announced that there was a death in its trial testing beloranib in patients with a rare genetic disease called Prader-Willi Syndrome. Shares actually went up -- albeit not nearly as much as they were down the previous two days -- because there was still a possibility that the patient was either taking placebo or the drug didn't cause the death.

Thursday was the most uneventful day of the week. Shares only went up 7.8% on continued optimism that the patient death could turn out to be much ado about nothing.

Unfortunately Zafgen is ending the week on a bad note with shares down more than 30% after announcing that the patient who died was taking beloranib not placebo and that the Food and Drug Administration was putting beloranib on a partial clinical hold.

So what: That "partial" part is important. A full clinical hold would require Zafgen to stop its clinical trials completely. Instead the FDA will allow the clinical trials to continue after patients are "screened for existing thrombotic disease." There have been thromboembolic events -- blood clots -- in previous and ongoing trials testing beloranib, so the FDA is being cautious with the most likely possibility for the death.

Another trial testing beloranib in patients with severe obesity complicated by type 2 diabetes will have similar monitoring for blood clots.

The biggest effect that the partial clinical hold will have is to delay the start of the phase 3 clinical trial in Prader-Willi Syndrome. Without any drugs on the market, the delay until the FDA can assess the efficacy and safety of beloranib will delay Zafgen's revenue stream by an unknown length of time.

Now what: The partial clinical hold shouldn't come as much surprise. The FDA is rightfully being cautious here. It's a signal that this issue isn't going to get wrapped up quickly, but that shouldn't be a surprise either.

Zafgen certainly deserves to go down some today because the easy out -- the patient was on placebo -- is no longer a possibility.

At this point, there's more upside than downside for Zafgen. It's still possible that the death wasn't caused by beloranib; Prader-Willi Syndrome patients have complications from the severe obesity associated with their disease. And even if the death was caused by the drug, there's still a possibility that beloranib could be approved given the unmet need for patients with Prader-Willi Syndrome.

If you're not interested in taking on the unknown risk, you could buy one of the other companies with obesity drugs already on the market. Both Arena Pharmaceuticals (ARNA) and Orexigen (NASDAQ: OREX) are up for the week. 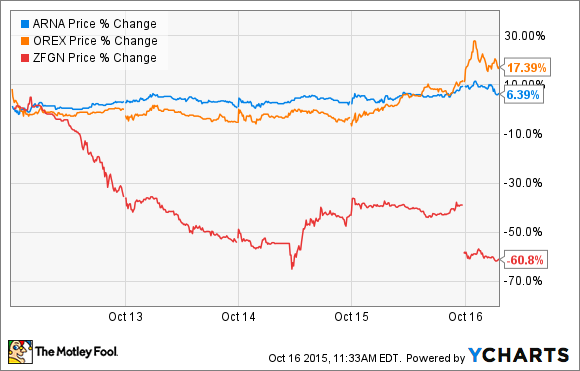 Unfortunately Arena Pharmaceuticals and Orexigen aren't great proxies for Zafgen and shouldn't be seen as direct competitors. If beloranib is approved, it'll treat Prader-Willi Syndrome and extremely obese patients, while Arena Pharmaceuticals' Belviq and Orexigen's Contrave produce less weight loss and are destined for less severe cases of obesity. Even if those patients wanted to take beloranib off label, the expected high price would make it prohibitive.

Why Zafgen Stock Is Crashing Today

Why Zafgen Inc's Stock Is in the Red Today