Please ensure Javascript is enabled for purposes of website accessibility
Log In Help Join The Motley Fool
Free Article Join Over 1 Million Premium Members And Get More In-Depth Stock Guidance and Research
By George Budwell - Oct 10, 2017 at 10:00AM

CRISPR's stock failed to take part in the broader gene therapy rally in September. Here's why.

According to data from S&P Global Market Intelligence, shares of the gene-editing company CRISPR Therapeutics (CRSP 4.97%) dropped by 13.1% in September. CRISPR's poor showing last month appears to stem from nothing more than investors simply shifting their collective interest to adoptive cell therapy companies with pipelines further along in the developmental process. 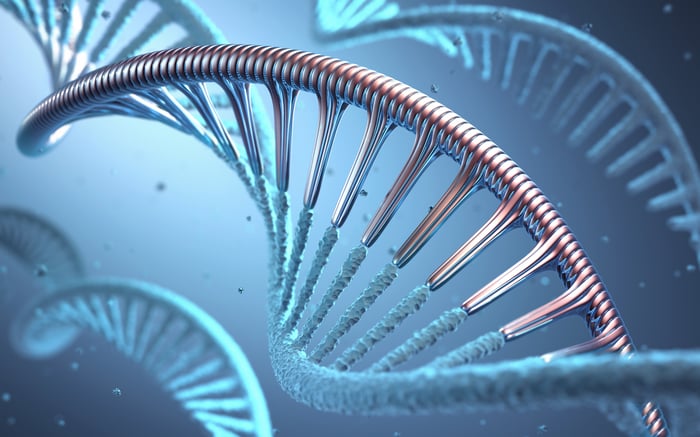 Over the course of September, for instance, adoptive cell therapy companies like Juno Therapeutics, bluebird bio, among others, all saw their shares rise substantially as a result of the growing interest in this emerging technology in the wake of Gilead Sciences' $11.9 billion buyout of Kite Pharma, along with the Food and Drug Administration approval of Novartis' CAR-T therapy, Kymriah. Unfortunately, CRISPR has yet to even enter clinical trials with its adoptive cell therapy, CTX-101 -- in other words, it could have a hard time carving out a profitable niche in this increasingly crowded space.

All hope isn't lost for CRISPR's adoptive cell therapy program, however. Unlike the current leaders in this field, CRISPR is aiming to develop genetically modified cell therapies that can be purchased off the shelf, which would solve some major problems associated with this first-generation of commercial-stage CAR-T therapies.

Having said that, CRISPR is several years away from becoming a commercial-stage operation based on the current state of its pipeline -- meaning that the company will almost certainly need to execute multiple secondary offerings in the coming years to advance its gene-editing platform toward a regulatory filing. So, early investors should probably brace themselves for a rather bumpy ride in the months and years ahead.