The owner of KFC, Pizza Hut, and Taco Bell in China keeps growing and has a plan to keep rolling.

Yum China (YUMC 0.27%), spun off from Yum! Brands (YUM 0.06%) late last year, has been faring just fine on its own. The controller of Kentucky Fried Chicken, Pizza Hut, and Taco Bell in the world's most populous country reported another good quarter last week, along with a few other important news items. Here's what investors need to know.

The top and bottom lines increased on better-than-expected traffic at existing restaurants, new restaurant openings, and positive traction with online loyalty programs and delivery services. Total company same-store sales are up 6% and 4% for the last quarter and year to date, respectively. 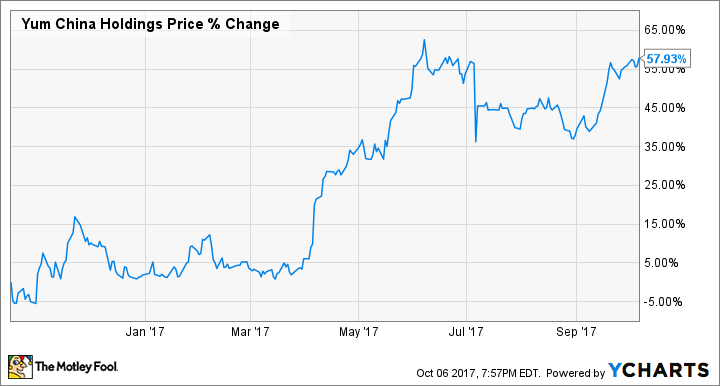 When Yum! Brands spun off its China division, part of the rationale was that the unique Chinese market would do better if left to its own devices. After one year as an independent entity, Yum China is proving that rationale to be true.

Shanghai's Pearl Tower lit up to celebrate the 30-year anniversary of KFC in China in July 2017. Image source: Yum China.

Though the transition away from Yum! Brands has gone well, Yum China's board of directors apparently felt a change in the executive team was in order. Going along with Q3 results was a press release announcing that current CEO Micky Pant will be replaced on March 1. His successor will be the company's current COO and president, Joey Wat. Pant will remain at the company as vice chairman of the board and as senior advisor.

The board thank Pant for his efforts in a news release in which Pant was quoted as saying Wat is "the best person to take the company to the next level." Yum China is trying to expand along with the country's fast-growing middle class, all while maintaining its lead as China's largest restaurant chain against a number of local brands and American bellwethers, such as McDonald's (NYSE: MCD).

The transition sounds as if it will be a non-issue, which left investors to focus on other news. The company's previous share-repurchase program, which had authorized up to $300 million in total purchase value, was increased to $550 million. In addition, a quarterly dividend was initiated at $0.10 a share. As of this writing, that's an annualized yield of 0.98% -- not the biggest payout, but respectable for a first-ever dividend. 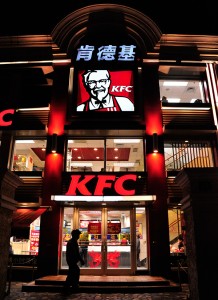 It has been a good year for Yum China. Total sales are getting a boost from menu and operational changes, new stores are getting opened, and the bottom line is benefiting as a result. Management said it believes it can hit its one-year target of 550 to 600 new restaurant openings and that operating profit will finish 2017 up double digits.

Now that it has the freedom to operate on its own, Yum China looks like a good bet on the growing Chinese middle class. Look for more details on the company's plans on Oct. 17, the date of the next investor day.