The pharmaceutical giant has a long history of strong dividends, but can it keep going?

The pharmaceutical industry has been a favorite among dividend investors, and AbbVie (ABBV -1.52%) has put together an impressive track record of treating its shareholders well. Dating back to before it became an independent company, AbbVie has reliably given its investors rising dividends year after year.

Yet the challenges that drug companies face have gotten tougher recently, and some investors are nervous that AbbVie might face pressure to take actions that might threaten its dividend over the long run. Looking at AbbVie with an eye toward deciding whether the dividend is safe should reveal any lingering issues that could grow into big problems ahead.

AbbVie's dividend yield is 2.8%, which is relatively similar to those of many of its drug-making peers and considerably above the 2% average among stocks in the S&P 500 index. Drug companies often have blockbuster treatments that generate substantial cash flow, leaving them with enough money to reinvest into new pipeline drugs and still pay shareholders considerable dividends.

The yield is also toward the low end of its range since becoming a public company, having climbed as high as 4% in past years and gone as low as around 2.5%. A considerable jump in the share price in recent months has been the primary driver of the yield decline. 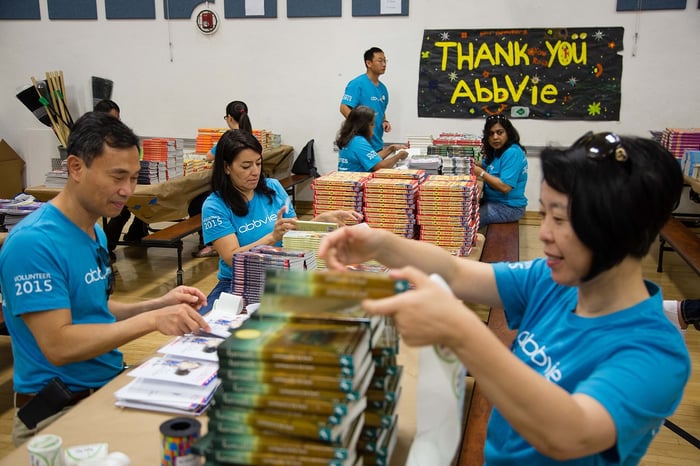 AbbVie has a current payout ratio of about 60%, and that's consistent with where the figure has been throughout most of the stock's history as a separately traded entity. A short-term earnings decline in 2015 sent the payout ratio considerably above the 100% mark for a while, leading some to become concerned about the stability of the dividend. Those concerns have lessened in recent years, and the current figure includes a margin of safety for investors who want to ensure safe payouts going forward.

AbbVie has raised its dividend every year since becoming separately traded, but most of the company's pedigree comes from its former parent. Together, they've put together a 45-year track record of rising payouts. Growth has come at a healthy rate, as well, including the most recent 12% boost to AbbVie's payout earlier this year. AbbVie's consistency in its dividend growth is a big selling point for income investors. 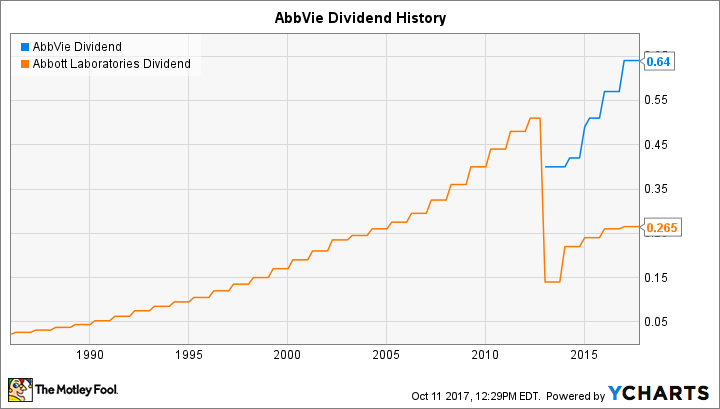 AbbVie's biggest success is also its biggest source of uncertainty. The company has a huge blockbuster hit with its Humira treatment, which is used for a number of autoimmune disease applications. Humira is responsible for more than three-fifths of AbbVie's revenue, dwarfing the contributions from other products. Yet AbbVie has had to fight against potential generic competition for Humira, with biosimilar versions having become a threat.

AbbVie has countered with efforts to protect Humira's intellectual property. A deal with Amgen (AMGN -0.57%), which makes a biosimilar version of Humira, will prevent competition in the key U.S. market until 2023, when the company anticipates losing the ability to protect the drug from generic rivals. However, Amgen will be able to sell its biosimilar in Europe starting next year, and that could at least incrementally hit AbbVie's results.

In the long run, AbbVie faces the much larger question of how to replace Humira's impact on its financials. Other promising drugs have become successful, but it will be hard to find one that has the breadth of scope that Humira has had.

AbbVie should stay well -- for now

AbbVie's current dividend appears to be solid, with the company having taken steps to defend its key moneymaker for the next several years. Beyond that, AbbVie faces a bigger challenge in determining its future strategic direction. Yet with a history of overcoming obstacles, AbbVie is in a position to find solutions that will protect its dividend for years to come.