The industrial machinery specialist has a long history of strong dividends, but can it extend its streak?

The quest for dividends leads many investors to look at industries with which they aren't familiar. Pentair (PNR -0.10%) isn't among the best-known names to typical consumers, but the work it does with industrial equipment is necessary to the smooth operation of the manufacturing economy. Pentair also has a long track record of treating its shareholders well by providing not only a reasonable dividend but also a payout that has grown steadily over time. Yet Pentair's dividend growth rate has slowed, and that has some people fearing that the payout might not be entirely safe. Let's take a closer look at the stock to see whether those concerns are warranted.

Pentair sports a current dividend yield of just under 2%, which almost exactly matches that of the broader S&P 500 index. The fact that Pentair doesn't have above-average yields isn't ideal for dividend investors, but it does take away some concerns that the yield might be too high to be sustainable. The company's current figure is close to the middle of its historical range over the past 10 years, which has gone as low as 1.25% and as high as 3%. Share-price gains since the beginning of 2016 have been primarily responsible for bringing the yield down over that period. 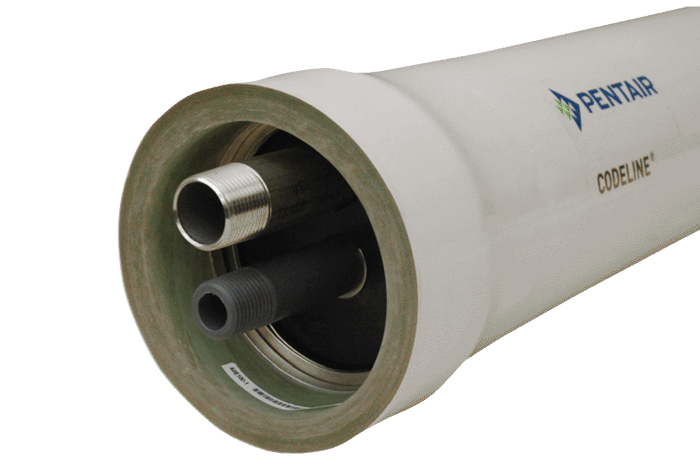 Pentair's current payout ratio amounts to just 40% of earnings, which suggests that its dividend is quite safe. However, when you look back at the stock's recent past, you'll see several periods during which Pentair reported net losses. That temporarily made the payout ratio number meaningless and put pressure on the company to find money to keep paying its dividend. Over short periods of time, payout ratio volatility won't endanger a dividend, but Pentair needs to demonstrate a lasting ability to keep earnings rising in order to reassure investors that the dividend is safe.

Pentair has put together a long streak of rising dividends that dates back for decades. Easily meeting the standards for Dividend Aristocrat status, Pentair has boosted its payout for 41 straight years. Yet as you can see below, Pentair hasn't been all that consistent in the rate of its dividend growth. During good times, large dividend increases have occurred, while more sluggish environments have resulted in just minimal boosts to the quarterly payout. 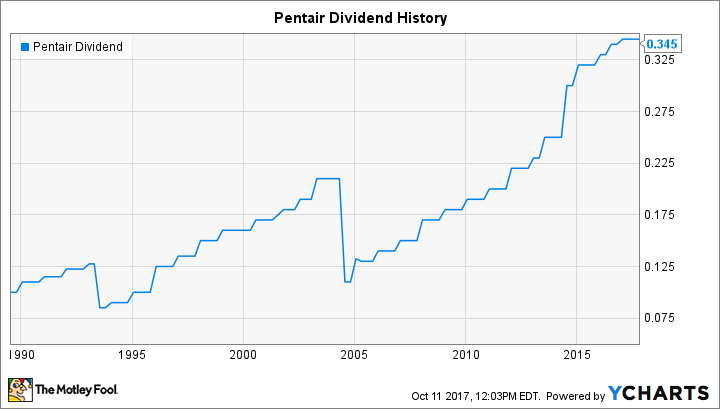 Pentair's business has hit a plateau in recent years. Since 2012, the company has seen its revenue climb just 10%, and when you take out the impact of extraordinary items, adjusted net income has been on the decline since hitting a high point in 2013. Part of that came from sluggish conditions in the industrial sector worldwide, especially within energy, and the stock has more recently rebounded as hopes for a stronger global recovery have emerged.

Pentair is aiming to reinvent itself in order to foster future growth. Last year, the company agreed to sell its valves and controls business to Emerson Electric (EMR 1.61%) for $3.15 billion, which reduced its exposure to the volatile oil and gas industry. Then in May, Pentair said it would break itself into two separate companies, one focusing on electrical systems and the other concentrating on water and fluid applications. The spinoff is slated to happen next year, and Pentair has said that the separate businesses will set appropriate dividend policies that will be consistent with past practice and the realities of each business.

Keep an eye on Pentair

With the uncertainty of the spinoff, dividend investors need to watch Pentair to see what details it gives about its future. The company hopes to create shareholder value by breaking itself up; if share prices go up as a result, then the possible impact the move might have on Pentair's dividend might be mitigated.