Two secular growth opportunities and a turnaround play that could deliver big returns for investors.

Even with the recent stock price drop since a noted short-seller launched a public attack against the company, Shopify Inc (US) (SHOP -5.48%) has been an amazing investment since going public, with shares still up nearly 270% in less than three years.

While the long-term prospects for Shopify are probably still very good, there are other companies out there with solid prospects to deliver market-beating returns in the years ahead. Three of our contributing investors have offered up two stocks set to profit from a huge global trend in NV5 Global Inc (NVEE 3.25%) and A. O. Smith Corp (AOS -0.22%), and a turnaround opportunity in gold miner Yamana Gold Inc. (USA) (AUY -3.93%). 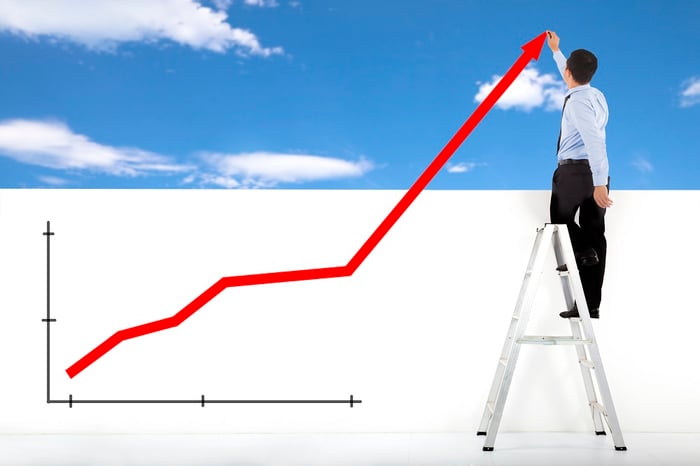 Keep reading to learn why our experts like these three companies to help you get multibagger growth in your portfolio.

Jason Hall (NV5 Global): Just as Shopify has seen explosive growth by delivering retailers a powerful way to participate in the e-commerce megatrend, NV5 Global is set for years of growth in infrastructure spending around the world. Over the next 30 years, the global middle class will come close to doubling in size, and the majority of these new middle class members will be urban residents.

It is going to take literally trillions of dollars of global spending to build out the energy, telecom, transportation, and other necessary infrastructure to support billions more people living in cities around the world.

Even the United States, which is on track to see a significant portion of its population grow older, as baby boomers reach retirement age over the next 15 years, will need to invest some $800 billion annually on infrastructure to remain globally competitive.

NV5 Global should be a big winner from this. The company, under founder, CEO, and major shareholder Dickerson Wright, has consistently delivered big growth and huge shareholder returns since going public: 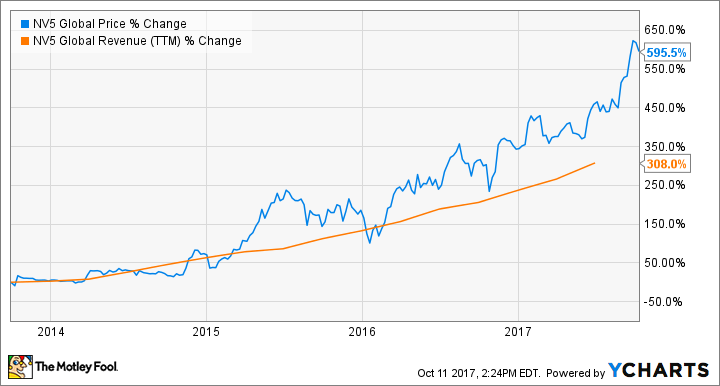 The opportunity for NV5 is twofold, too. Increased infrastructure spending will not only help drive its prospects higher but will also support its ability to grow by consolidating its industry. There are more than 100,000 engineering and infrastructure consulting firms in the U.S., and NV5 Global has acquired more than 20 since its founding.

Yet its current market cap is still less than $600 million, and annual revenue might reach $300 million this year. NV5 is an excellent long-term growth stock that could deliver serious multibagger returns for years to come.

Reuben Gregg Brewer (A.O. Smith): In developing nations, the only water option for most people is cold, but given the opportunity, they'd take a hot shower in a heartbeat. That's where A.O. Smith comes in. The company is a leading global manufacturer of water heaters, something you probably never think about. Here's what's exciting: The company is big (and still getting bigger) in giant developing market China, and it just recently built a new plant in India.

The opportunity is huge. A.O. Smith's sales in China have grown at a compound annualized rate of 22% over the past decade. Its game plan is to follow the same business model as it expands into India, an equally large nation pushing its way up the socioeconomic ladder. That suggests material growth ahead. Note that foreign markets only account for about 35% of A.O. Smith's top line, and most of that is China today. So there's still plenty of room for growth. 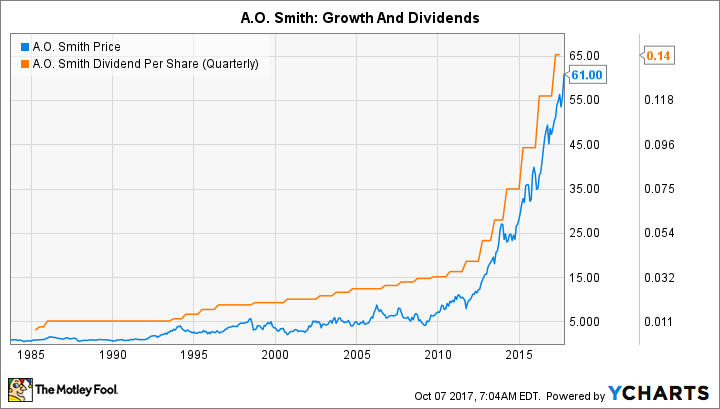 But here's what I like most about this story: A.O. Smith has a 24-year history of annual dividend increases. The yield may not excite you since it's less than 1%, but the dividend has increased at least 26% on an annualized basis over the trailing-1-, 3-, and 5-year periods. Clearly, this company believes in returning value to shareholders (Shopify doesn't pay a dividend, in case you were wondering). If you want incredible growth opportunities and some income along the way, do a deep dive on A.O. Smith today.

All that glitters could be gold

Neha Chamaria (Yamana Gold): A gold stock might not sound like a candidate that could mirror Shopify's eye-popping rally, but the under-$3 stock Yamana Gold has a fair chance if its growth plans pan out like it expects.

Yamana has several projects in the pipeline, with its seventh mine, Cerro Moro, all set to start production early next year. This year is, in fact, turning out to be the foundation year for exponential growth ahead for Yamana, as the company allocated substantial amounts of capital expenditures on the exploration of at least seven different projects throughout the year. The goal: Yamana foresees 20% growth in gold and a 200% jump in its silver production between 2017 and 2019.

Cerro Moro could be a game changer, as it won't just add to Yamana's production capacity. In the company's own words, "Cerro Moro is expected to be a significant contributor to cash flow as a result of the expected cash costs and AISC that are well below the company's current average cost structure." AISC stands for all-in sustaining costs, which is a widely used measure of cost for gold companies. While improving Yamana's overall cost profile, the cash flow from Cerro Morro should also help it repay debt nearing maturity over the next couple of years.

Cerro Moro is on track. Once online, it could send Yamana's profits soaring. The stock should follow, especially given its incredibly low current valuation of less than five times price-to-cash flow and price-to-book of only 0.6.