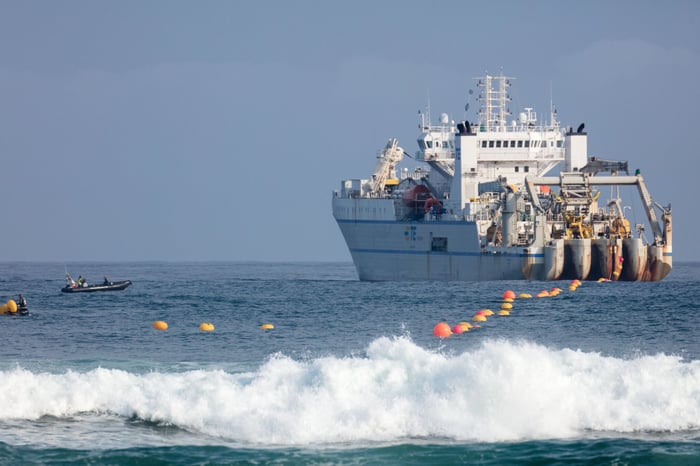 There aren't many sure things these days, but the need for fast broadband connections is one. Of course, this isn't limited to the borders of the U.S. According to McKinsey, the international expansion of digital streaming video from companies like Netflix (NFLX 1.90%), and the increased adoption of enterprise cloud computing by multinational corporations will lead to an eightfold increase in cross-border online traffic by 2025.

You may be wondering what the technology is behind your ability to stream Netflix in Europe, or Skype with your friend in Hong Kong, all in the blink of an eye. Well, the recently completed undersea cable called Marea, laid by the trio of Microsoft (MSFT 1.29%), Facebook (FB 4.24%), and telecom company Telxius (a subsidiary of Spanish telecom Telefonica (TEF 0.00%)), illustrates the amazing tech behind today's fiber-optic connections. Here are some of Marea's impressive stats.

Marea was completed on September 21, connecting Virginia Beach to Bilbao, Spain -- a span of 4,000 miles. That connection is further south than most existing Atlantic subsea infrastructure, which connects in the northeast. The cable weighs 10.25 million pounds, and runs as low as 17,000 feet under the Atlantic ocean, dodging around coral reefs and undersea volcanoes along the way. It took two years to build out, which may seem long but is actually one-third the time of a typical subsea cable project.

The cable is only about 1.5 times the diameter of a garden hose but contains eight pairs of fiber-optic cables that can transmit data at 160 terabits per second -- not gigabits, but terabits. That Is 160 million times faster than the typical cable broadband connection and equivalent to streaming 71 million high-definition Netflix accounts at the same time.

A new kind of pipe

While these stats are impressive in and of themselves, the story gets even better, as Marea has the built-in flexibility to improve its capabilities over time. That's because Marea was constructed according to an "open" design, which enables increases the cable's speed with advances in technology. As I have previously written, communication technology companies are increasingly looking to make their products as open and flexible as possible. Customers are becoming increasingly wary of being locked into a particular vendor, and vendors seek access to as many users and markets as possible. That's a change from how things used to work, where tech companies -- because of the rarity of their expertise -- would seek to make closed, proprietary tools, that would become indispensable to the end customer.

This change can be seen in Microsoft's strategy shift over the past few years. In the old days, Microsoft was a typical closed-off company, with its office applications and servers only operating on its Windows operating system. Fast forward to today under new CEO Satya Nadella Microsoft has opened itself up to writing software for the open-sourced Linux operating system as well as Apple's iOS. The move also falls in line with the philosophy behind Facebook's Open Compute project, initiated in 2011 with the goal of opening up once-secret and proprietary technology for the benefit of companies that used such hardware (such as Facebook).

Financial terms of the deal weren't disclosed, but the cable will help augment Microsoft's Azure Cloud resilience and reliability. As this year's hurricane season reminded us, natural disasters have the capability to take out key infrastructure. In 2012, Hurricane Sandy actually shut down wireless and internet connections for days, as much of the existing subsea Atlantic infrastructure was concentrated in New York and New Jersey at that time. Thus, Microsoft is looking to differentiate itself from rival Amazon Web Services in terms of resilience and put -- even more -- distance between itself and the number-three-and-below cloud infrastructure players.

Facebook, for its part, gets the same dependability in connecting data centers to its 2 billion monthly active users, 88% of which are outside the U.S. and Canada. Both companies will now have access to owned cable, which will save them significant amounts in bandwidth rental costs that would otherwise go to telecoms.

Marea underscores the amazing technological progress and disruptive capabilities of modern, open-source tools. On the other hand, when these tools are used by huge companies such as Microsoft and Facebook, these companies become even more powerful and entrenched in the global economy. That's a big reason behind the amazing multi-year outperformance of these large-cap tech names during this bull market, and it doesn't seem as if they will be dislodged anytime soon.