Please ensure Javascript is enabled for purposes of website accessibility
Log In Help Join The Motley Fool
Free Article Join Over 1 Million Premium Members And Get More In-Depth Stock Guidance and Research
By Tyler Crowe, Timothy Green, and Cory Renauer - Oct 13, 2017 at 5:05AM

Looking for some investments in the healthcare sector that aren't priced at a high premium? Allergan, Gilead Sciences, and DaVita are an excellent place to start.

When value investors search through 10-Ks and valuation ratios for stocks selling on the cheap, healthcare isn't typically a sector full of stocks selling at a deep discount. When those stocks go on sale, though, it can be a great opportunity to pounce.

So we asked three of our investing contributors to each highlight a stock in the healthcare sector that looks to be a great value pickup for price-conscious investors. Here's why they selected Allergan (AGN), Gilead Sciences (GILD 0.89%), and DaVita (DVA 3.94%). 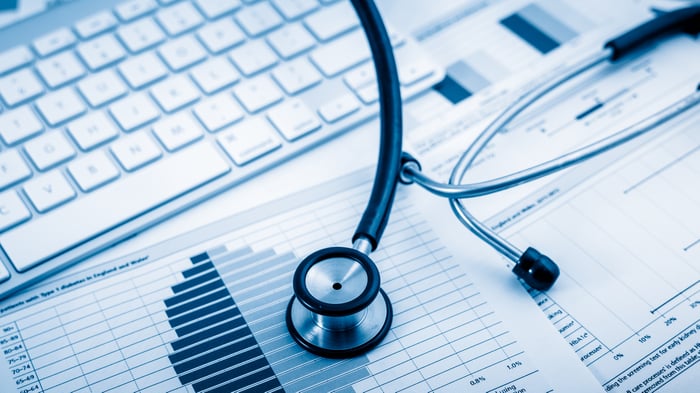 This bullet dodger is looking cheap

Cory Renauer (Allergan): Selling an enormous generics segment to Teva last summer made the CEO of this company, Brent Saunders, look like a genius. The deal added $40.4 billion to Allergan's coffers, while intense pricing pressure for the generics it unloaded recently contributed to Teva's major sell-off.

One reason this company was able to offload its generics segment was a previous deal that gave the company both its name, and Botox. Sales of the famous wrinkle reducer are surging, thanks in large part to therapeutic applications such as overactive bladder and spasticity. Compared with last year, second-quarter cosmetic Botox sales rose a healthy 11% to $210 million, while therapeutic sales jumped 17% to $346.9 million.

Allergan has been funneling Botox sales into development of new specialty drugs that are beginning to bear fruit. So far this year, the company has already earned approvals for five drugs, and the company's pipeline boasts five more candidates in late-stage clinical trials.

Recently, Allergan shares have been trading at just 13.6 times this year's earnings expectations, which is miles below the S&P 500 average of 18.8 times forward estimates. That's awfully cheap for a company with a lead product growing by double digits, and a stable of potential growth drivers in development.

Still cheap, and still plenty of options after a recent acquisition

Tyler Crowe (Gilead Sciences): Gilead Sciences' stock has had a good run over the past several months, up 29% since June. The largest catalyst for the move was the company's acquisition of Kite Pharma, which could give it a quick win if its axi-cel treatment gets approval later this year, not to mention an expanded development pipeline for down the road. That's critical for a company that has seen sales of its flagship treatments for hepatitis C decline steadily for several quarters.

Even after the recent price spike and the $11 billion acquisition, there looks to still be a lot of value in this stock. One thing to remember is that before this deal, Gilead had $36 billion in cash on the books. Once the transaction is complete, management has even said it plans to make some more moves if the right deal materializes. It's also worth mentioning that Gilead's stock still trades at just 9 times earnings, with more than $20 billion of its market cap still in cash.

As tough as the past couple of years have been for the company, there are lots of reasons to believe better days are ahead for the biotech giant. At today's price, it's a value stock that's hard to turn away from in a high-priced broader market.

Tim Green (DaVita): DaVita's main business is providing dialysis services to hundreds of thousands of patients at more than 2,000 outpatient dialysis centers, most of which are in the United States. The company generated $4.59 billion of net revenue from U.S. dialysis and related lab services during the first six months of this year, along with an adjusted segment operating margin of nearly 19%.

DaVita stock has slumped since peaking in 2015, creating a potential value opportunity for investors. Analysts expect DaVita to produce $3.59 in adjusted per-share earnings this year, putting the current stock price at about 16.5 times that number. That may not seem all that cheap, but considering the S&P 500 currently trades for nearly 25 times earnings, DaVita looks like a relative bargain.

Being a healthcare company that makes most of its money from a single type of service, DaVita is particularly sensitive to any change in healthcare laws and regulations. If you invest in the stock, you're accepting the risk that an unexpected change from Washington could have a negative impact on the company's results. If you can live with that, DaVita is an inexpensive healthcare stock worth considering.