Please ensure Javascript is enabled for purposes of website accessibility
Log In Help Join The Motley Fool
Free Article Join Over 1 Million Premium Members And Get More In-Depth Stock Guidance and Research
By Tyler Crowe, John Rosevear, and Brian Stoffel - Oct 13, 2017 at 6:04AM

Want to own stocks that will bear the brunt of the next bear market? Take a look at Enterprise Products Partners, Amazon.com, and Ford Motor Company.

After an eight-and-a-half-year bull market, lots of people on Wall Street are wondering when it will be time for this bull to be put out to pasture. Bull markets this long are inevitably going to create some weariness from stock buyers because they fear that the next bear market may be right around the corner.

The best thing we can do to prepare our portfolios for an eventual bear market is to own stocks that are resilient and will likely perform well under those circumstances. We asked three of our investing contributors to each highlight a stock they see as one to own for an approaching bear market. Here's why they picked Enterprise Products Partners (EPD 1.11%), Amazon (AMZN 3.53%), and Ford Motor Company (F 3.06%). 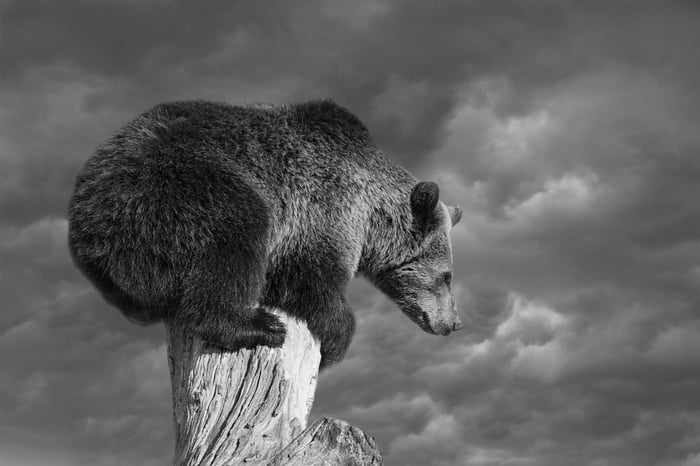 Just went through a bear market and turned out all right

Tyler Crowe (Enterprise Products Partners): Even though the stock market has been on a bull run for pretty much this entire decade, the energy industry is still trying to crawl its way out. The rapid growth of shale production in the U.S. and several major production projects elsewhere that came on stream from 2014 to 2016 led to a large oversupply, and we're still feeling the impact on the price of oil and natural gas.

Despite this challenging market, Enterprise Products Partners has done surprisingly well. A large reason is that much of the company's business is related to the transport and processing of oil and gas rather than the production of the product itself. Ever since oil prices started their downward spiral back in the middle of 2014, Enterprise's operating income has grown 4%, and management has been able to comfortably raise its payout to investors every quarter.

This performance is a testament to the resiliency of its business model, which focuses on fixed-fee revenues, slow but consistent investment, and prudent financial management that's surprisingly absent from this particular industry. The company's stock price may swing with investor sentiment, but that's unavoidable. What really matters is that Enterprise's business has shown it can perform relatively well in a bear market.

Amazon could wipe out competition during a recession

Brian Stoffel (Amazon): I'm going to propose something blasphemous: Amazon would benefit from an economic downturn -- and shareholders who have the stomach to hold through such a downturn could be rewarded handsomely.

Founder and CEO Jeff Bezos is famous for saying, "Your margin is my opportunity." Well, during a recession, Amazon could attack the margins that keep lesser companies alive, and wipe them out entirely. Consider Whole Foods: Amazon is already lowering prices on lots of goods, but if a recession hits and Bezos uses an Amazon Prime membership as bait toward even heftier discounts, it could disrupt the entire industry at a time when the competition is at its weakest.

Remember, Amazon's mission statement is simple: "To be the Earth's most customer-centric company." I used groceries as an example above, but there's no telling where Bezos could feast on fragile companies that could cede market share during a downturn. While Amazon's stock might suffer during a bear market, there's little doubt in my mind that long-term shareholders could be excused for actually hoping for one.

A surprise top stock in 2010, poised to repeat

John Rosevear (Ford Motor Company): What's a good stock to buy when a recession is approaching? How about a solidly profitable company that's already cheap -- and that will be poised for growth early in the recovery?

Investors who were following Ford Motor Company during the last recession know how that played out. New-vehicle sales fall sharply during tough economic times, and 2008 was no exception. Ford swung to steep losses. But sales began to pick up early in the recovery, and Ford was ready with fresh new products in showrooms, while its rivals were still scrambling to recover.

New products draw more buyers and sell at better margins than dated ones, so the result was a happy one: profits and market-share gains for Ford much earlier than expected. Ford surprised investors with a full-year profit in 2009, and its stock price was off and running.

Ford managed that trick because then-CEO Alan Mulally had the foresight to borrow a big cash hoard in 2006 while the economy was still good. Ford used that cash to fund new-product development through the downturn, while rivals were cutting their future-product programs to offset losses.

Ford is much healthier now than it was in 2006. It's solidly profitable, has an investment-grade credit rating, and its debt load is modest and well-structured. It doesn't need to borrow this time around to repeat that trick: Ford has nearly $30 billion in cash and roughly $11 billion in available credit lines in the (unlikely) event it runs through its hoard.

It's enough money that Ford CFO Bob Shanks has said that he thinks the company will be able to continue paying its dividend through a recession -- unless things get dire. Ford's dividend is actually fairly modest, but because Ford is trading at less than eight times its expected 2017 earnings, its dividend yield is sitting right around 5%.

Long story short: All stocks will suffer to some extent during the next recession, Ford included. But Ford will pay you a nice dividend to reinvest (and dollar-cost average) while you wait it out, and it should be positioned to deliver strong profit growth early in the recovery. It could be a pretty nice deal.