Brother, can you spare a yuan?

Qudian certainly can. The Chinese micro-lending specialist is about to hit the U.S. stock market following an IPO early next week. Millions of Chinese consumers and businesses tap Qudian for credit, but does this make the stock a potential buy? 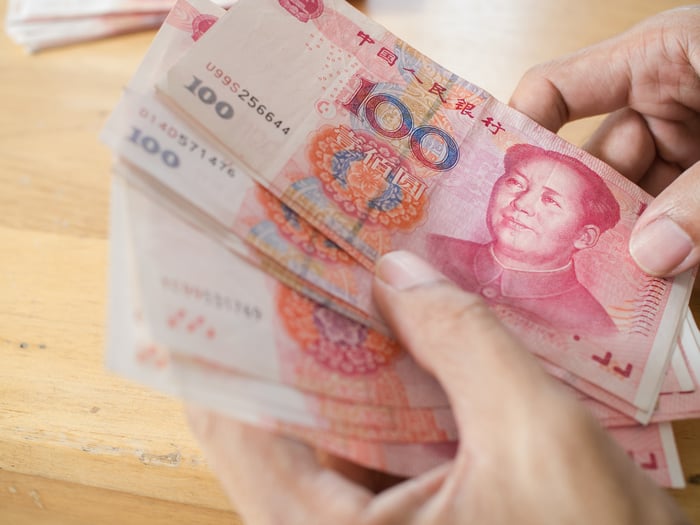 Qudian's sweet spot is consumer loans. According to a study from Oliver Wyman commissioned by the company, it was the top small lender in the country in terms of number of active borrowers and volume of transactions as of June 30.

These loans are fairly small, even by local standards, and typically have short durations. There sure are a lot of them, though -- in the first six months of this year, the company dispensed a total of around 38.2 billion yuan ($5.8 billion).

Qudian is a purely online lender, with almost all loans coming via its mobile app. Its system often makes lending decisions within seconds, the company says.

The funds are disbursed through Alipay, the giant e-payment platform originally built by Alibaba Group (NYSE:BABA) and now operated by mighty Alibaba spinoff and affiliate Ant Financial (which, by the way, effectively holds nearly 13% of Qudian prior to the IPO). The vast bulk of Qudian's loans are of the small, consumer variety, but the company also lends to merchants.

Although Qudian doesn't really have an equivalent on the U.S. market, we can say it's roughly in the neighborhood of online lenders OnDeck Capital (NYSE:ONDK) and LendingClub (NYSE:LC). OnDeck Capital concentrates on small businesses loans, however, while LendingClub is a peer-to-peer facilitator.

The Chinese company's growth has been rapid. As of June 30 it had just under 29 million monthly average users, more than double the tally at the same time the year before. The increase in the platform's active borrowers across that stretch of time was even steeper, at 166% to nearly 5.6 million.

Going forward, Qudian says it will utilize its proceeds from the IPO for marketing and "borrower engagement" efforts, as well as strategic acquisitions. The game, then, is to build on that No. 1 position through greater consumer awareness, and by buying new assets.

Again, Qudian doesn't have a publicly traded U.S. equivalent. Plus it's recently profitable, in contrast to sort-of-peers OnDeck Capital and LendingClub. These factors alone should attract some interest in the stock.

Another draw is Qudian's tight relationship with Ant Financial (and, by extension, that company's close affiliate Alibaba). Alipay is both a key source of Qudian's custom -- its users can easily connect to the lender's services through the app -- and the means through which it funnels the loans.

Yet this is a double-edged sword; Ant Financial is a powerful and useful partner, but there's also dependency risk. I'm also a bit leery of companies that don't have long histories of turning a profit. Qudian is still very young, and while its 2016 profitability was very strong, so far it's only a one-off. Most publicly traded American financials have years of results, which can help us gauge fundamental soundness.

Additionally, its ownership will remain very concentrated -- company founder and CEO Min Luo is to retain voting rights of over 70% after the IPO. Other directors and top managers will collectively hold more than 11%. It's safe to assume that minority shareholders will not have much, or even any, say in its strategy or direction.

All that said, Qudian has a commanding position in its market, and obviously knows how to grow its business. It also operates in an economy that, while not as hotly growing as previously, is still very much on the rise. All factors considered, then, I think the company's stock will be a hit when it lands on the market.

37.5 million American Depositary Shares (ADSes) will be sold in Qudian's IPO, at a price between $19 and $22 a piece. The ADSes will subsequently start to trade Wednesday, Oct. 18 on the New York Stock Exchange under the ticker symbol QD.