Please ensure Javascript is enabled for purposes of website accessibility
Log In Help Join The Motley Fool
Free Article Join Over 1 Million Premium Members And Get More In-Depth Stock Guidance and Research
By Maxx Chatsko - Oct 14, 2017 at 10:31AM

If you're looking to kick back and build wealth from stock gains and income payments, then consider International Paper, Kinder Morgan, and A.O. Smith.

While it's fun to dream of a get-rich-quick scheme, the simple reality is that most of us will only be able to do just that: dream. Of course, many people still put a lot of brainpower thinking of how to build retirement wealth. What's the best combination of assets? Do you need gold? Maybe some real estate? Bitcoin?

One of the best strategies is also the simplest: Buy shares in great companies, and hold forever. Although the term "great" is sometimes misinterpreted as "popular" in relation to companies, there are quite a few downright boring investments that can help you reach your long-term financial goals. So, rather than chase shiny objects, I think any portfolio can build retirement wealth with a position in cardboard-box supplier International Paper (IP -1.27%), beaten-down pipeline operator Kinder Morgan (KMI -1.06%), and water-heater leader A.O. Smith (AOS -0.25%). 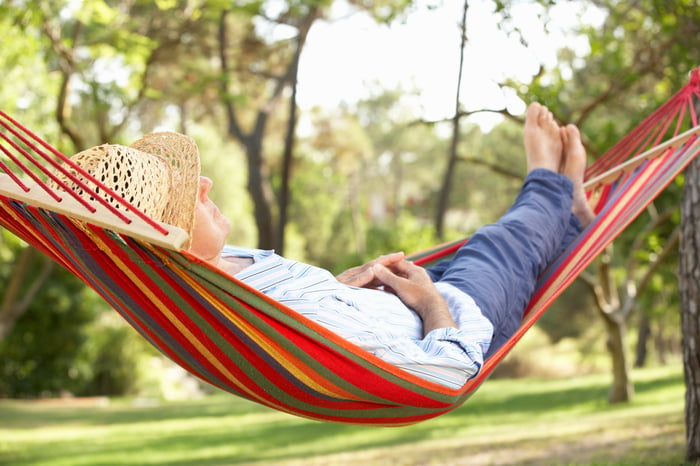 The real winner of the shipping wars

The relationship between online retailer giant Amazon.com and shippers such as FedEx has long been mutually beneficial, but that hasn't stopped rumors that the retailer may one day attempt to handle logistics and delivery itself. Whether or not a shipping war ever takes place, International Paper is one key player that will remain unaffected no matter the outcome. That's because it supplies ammunition to both sides in the form of corrugated packaging, also known as cardboard boxes.

While the dividend stock has only managed to keep pace with the S&P 500 over the past three years, management has big plans for continuing to create shareholder value in the long term. The business is healthier than ever -- and trends in online shopping and the boring corrugated-packaging market are at all-time highs. 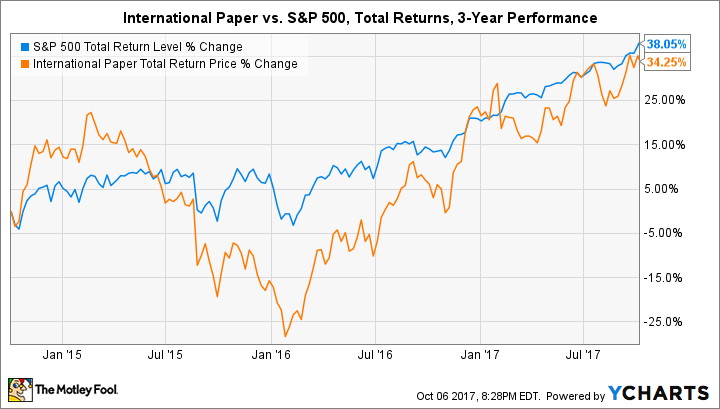 International Paper has been refocusing its business on core areas with higher margins and better growth prospects in recent years, and the efforts have paid off tremendously. Although operating cash flow dropped 20% from 2014 to 2016, annual free cash flow hasn't registered lower than $1.6 billion since 2007. It has averaged $1.8 billion annually for the past five years and came in at $1.9 billion in 2016.

It gets better. Not only is that number expected to grow in the next five years, but management has also committed to return 40% to 50% of free cash flow to shareholders each and every year in the form of dividend payments and share repurchases. That promise, combined with the fact that the need for corrugated packaging is near an all-time high, and a dividend that already yields 3.2% today, International Paper stock is an easy choice for building retirement wealth.

Not that long ago, one of the most important topics of the day was American energy independence. Considering the United States imported 60% of its petroleum consumption just a little over 10 years ago, it seemed to be an impossible goal. How quickly things change: Today, North American energy independence is a slam dunk. In fact, the continent will become one of the largest exporters of energy in just a few years' time -- and continue growing from there.

Few companies are better positioned to take advantage of this trend than Kinder Morgan. The pipeline operator's stock hasn't had much luck against the S&P 500 in the past several years, but that just makes it an even better buying opportunity. 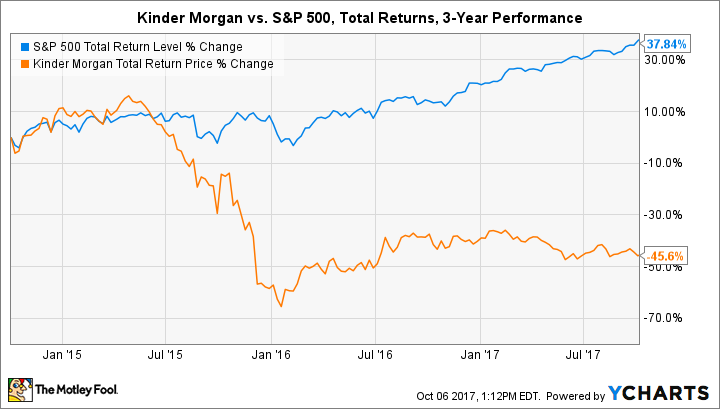 The distilled argument is a simple one: Kinder Morgan relies mostly on fee-based business driven by the volumes of petroleum and natural gas being distributed from Point A to Point B. As more petroleum and natural gas is earmarked for international destinations, it will have to be moved from inland production sites to America's shores. The pipeline operator's 70,000 miles of natural gas pipeline, ability to move 2.1 million barrels of crude oil daily, and natural gas storage capacity that totals 16% of Uncle Sam's total will play an integral role.

After a slowdown following the 2014 slide in energy prices, the business has begun showing signs of improvement in the past several quarters. Kinder Morgan appears to be on pace to return to historical profit levels (at least), which has given management the confidence to announce an expected 60% dividend increase in 2018 and 25% annual growth from 2018 to 2020.

That would bump the annual distribution from $0.52 per share today to $0.83 per share next year, and potentially as high as $1.30 per share by 2020. If you purchased shares today, then you can expect a rather sizable per share payout in a couple of years. It's difficult for any wealth-building strategy to pass that up.

One of the best growth stocks on the market

It may be difficult to believe that the boring business of water heaters has delivered better returns than much ballyhooed stocks such as Amazon.com or Apple since 2011, but it's true. That's what happens when you build the No. 1 market position in commercial and residential water boilers and water heaters in multiple markets. And it's especially true when one of those markets is China, where there a lot of households, and most are buying their first water heater. Ever.

A.O. Smith has since ventured into home air purifiers and home water treatment systems, which are also growing into promising product lines in China. That hints that although the stock has absolutely trounced the S&P 500 over the long haul, market-beating growth could continue for the foreseeable future. 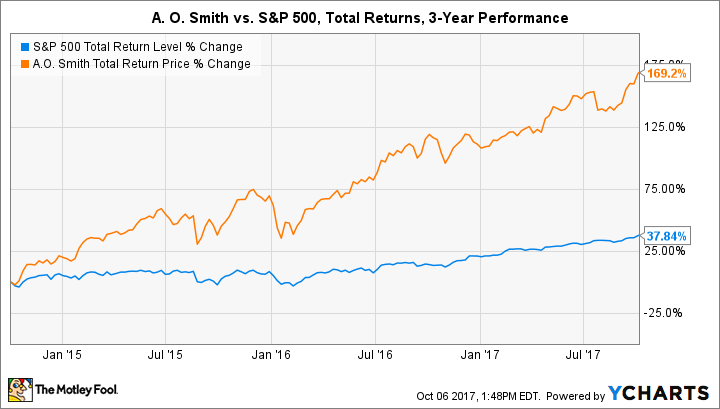 It's a beautiful operation, really. Strong brand recognition and the need to replace water heaters every so often in North American homes provide steady revenue and earnings each and every year. Growth markets such as China (and soon India) power incredible growth. Investors only have to buy, hold, and kick back while returns pile up.

A.O. Smith isn't exactly a Dividend Aristocrat today, paying less than a 1% dividend yield, but soaring earnings and cash flow provide plenty of room to grow quarterly distributions in the future. For now, management is focused on expanding operations in China and India, but given the gaudy share price returns, shareholders can't exactly complain.

Not every wealth-building investment has to be flashy. Boring stocks such as International Paper and A.O. Smith Corp. can deliver awesome long-term returns and have done so. And although Kinder Morgan is a little more exciting, the current share price represents an amazing buying opportunity for individual investors. Simply put, it's difficult to pass up any of these three stocks for your portfolio.

10 stocks we like better than Kinder Morgan
When investing geniuses David and Tom Gardner have a stock tip, it can pay to listen. After all, the newsletter they have run for over a decade, Motley Fool Stock Advisor, has tripled the market.*

David and Tom just revealed what they believe are the 10 best stocks for investors to buy right now... and Kinder Morgan wasn't one of them! That's right -- they think these 10 stocks are even better buys.