International Business Machines (IBM -0.66%) will have another chance to change the narrative when it reports its third-quarter results after market closes on Tuesday, Oct. 17. The century-old technology giant has reported 21 consecutive quarters of decreasing revenue. Growth businesses like cloud computing are putting up impressive numbers, but legacy businesses continue to contract.

One major tailwind for IBM in the third quarter was the launch of its latest mainframe, the z14. Each mainframe refresh triggers upgrades from IBM's install base, providing a temporary boost to the top line. That may be enough to put an end to IBM's long slide in revenue, although analysts are expecting another decline. 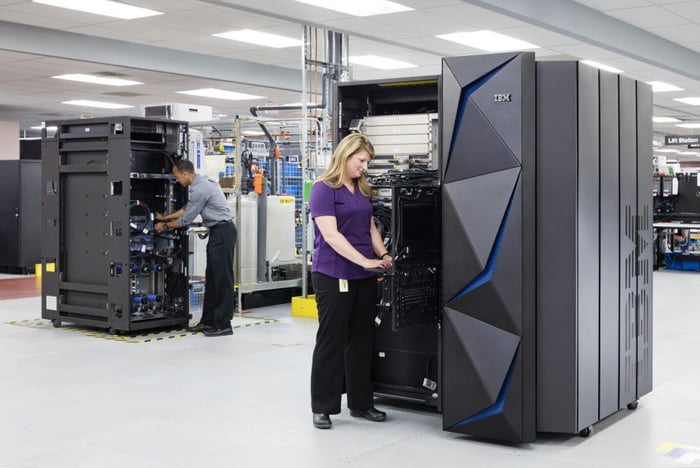 Revenue from IBM's strategic imperatives, what the company calls its growth businesses, rose by 7% year over year during the second quarter on a constant currency basis. Over the past 12 months, strategic imperatives generated $34.1 billion of revenue, about 43% of IBM's total revenue.

The cloud computing business put up more impressive growth numbers. Second-quarter cloud revenue grew by 17%, while the cloud as-a-service annual revenue run rate surged 32% to $8.8 billion. IBM maintained its full-year earnings and free cash flow guidance despite the revenue miss. The company expects 2017 adjusted EPS to be at least $13.80, with free cash flow expected to be roughly flat compared to 2016.

Analysts expect IBM to report third-quarter revenue of $18.6 billion, a 3.3% year-over-year decline. That's a smaller stumble compared to the second quarter, but it implies that IBM's mainframe launch won't come close to offsetting declines in other parts of the business.

Adjusted EPS is expected to come in at $3.28, down slightly from $3.29 in the prior-year period. IBM has beat analyst estimates for earnings for the past 11 quarters, with analysts consistently underestimating the company's ability to maintain the bottom line. The average analyst earnings estimate for 2017 is $13.75 per share, a bit below IBM's guidance.

IBM announced its latest mainframe refresh back in July, but it only began shipping the system in September. With the third quarter ending soon after the first system made it out the door, it's unclear exactly how much revenue will be recognized during the third quarter, and how much will be pushed into the fourth quarter.

IBM typically enjoys a sales boost for a few quarters following each mainframe refresh. This will provide a tailwind as IBM looks to return to revenue growth. Expect to hear some details on the mainframe launch, including whether the company is adding new mainframe customers, during the conference call.

Beyond the mainframe, investors should keep an eye on the strategic imperatives. This group of businesses will need to keep growing for IBM to eventually hit its long-term target of low single-digit annual revenue growth. Lost revenue from the legacy portion of the business tied to shrinking markets will need to be offset for IBM to return to growth.

The new mainframe will provide a sales boost over the next few quarters, aided by fast-growing businesses like cloud computing. But the market won't believe IBM's turnaround is for real until it starts producing revenue growth. How close IBM is to turning that corner remains unclear.