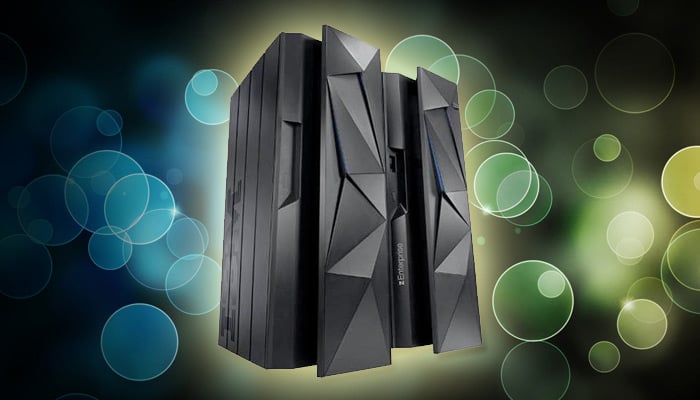 For those who know little about International Business Machines (NYSE:IBM), the company's hulking System Z mainframe computers may seem like little more than a relic. The 42% year-over-year decline in System Z sales during IBM's first quarter would appear to offer proof that the mainframe business is struggling.

But investors shouldn't worry about this mainframe sales collapse. It's happened before, and it will happen again. IBM's System Z product cycle, which sees new models introduced every few years, induces an extreme amount of sales volatility as clients rush to upgrade. While IBM doesn't report System Z sales numbers directly, the company does report year-over-year performance, and that allows us to see that the big drop in sales during the first quarter is nothing out of the ordinary.

Despite the rise of hyperscale data centers and cloud computing, IBM's mainframe computers remain integral parts of many organizations' IT infrastructures. Visa, Wal-Mart, and Citigroup are a few examples of major corporations that continue to rely on IBM's mainframe systems. While expensive, mainframe systems are ultra-reliable, secure, and can provide meaningful cost savings for specific use cases. The z13 mainframe, launched in January 2015, can process 2.5 billion transactions each day, the equivalent of 100 Cyber Mondays, according to IBM.

This is how the mainframe product cycle works: a major upgrade fuels demand as clients replace older machines, creating a few quarters of extremely strong sales. Once the initial rush is over, sales fall back to earth, only to rise again a few years later when IBM refreshes its lineup. This pattern is evident looking at the performance of the System Z business over the past decade. 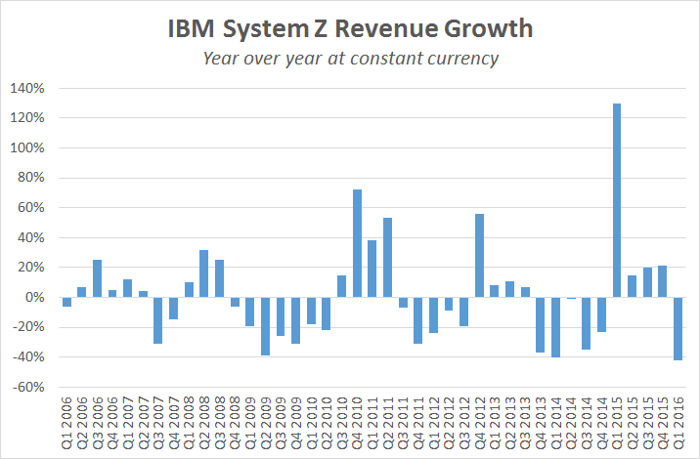 In 2005 and 2006, the System z9 line of mainframes launched, propelling sales higher until the second half of 2007. The System z10 arrived in early 2008, again providing a revenue boost for a few quarters. In 2010, the first zEnterprise System launched, followed by a refresh in late 2012. In both cases, the same pattern of strong sales emerged. Lastly, the 2015 launch of the System z13 kept the trend going.

While sales of mainframe systems represent a relatively small portion of IBM's total sales, once related hardware, software, and services are included, the mainframe accounts for a major part of IBM's profits. Back in 2012, an analyst from Bernstein Research estimated that the mainframe ultimately accounted for a quarter of IBM's revenue and nearly half of its profits. IBM's business has changed since then, with the company undergoing a transformation, but the mainframe remains a key part of IBM.

The mainframe hasn't really been a growth business for IBM over the past decade, but the company has taken steps to position the systems as a viable alternative to data centers filled with x86 machines. System Z mainframes have been able to run Linux for more than a decade, but the LinuxONE, a variant supporting only Linux, was launched late last year in an effort to appeal to organizations running Linux-based systems, either on-premises or in the cloud. LinuxONE supports a long list of open source software, and it can be paid for with a pricing system based partly on usage, lowering the upfront cost of running a mainframe.

Whether IBM will be able to significantly grow its mainframe business going forward is an open question. In the age of cloud computing, the systems certainly carry a stigma, viewed by many as outdated and obsolete. But the drop in mainframe sales during the first quarter is not a sign that those people are correct. Instead, it's a natural consequence of the mainframe product cycle. Investors have nothing to worry about.