Please ensure Javascript is enabled for purposes of website accessibility
Log In Help Join The Motley Fool
Free Article Join Over 1 Million Premium Members And Get More In-Depth Stock Guidance and Research
By Daniel Miller – Oct 16, 2017 at 7:17AM

GM's sales in China in the third quarter were strong, but what drove those results -- and can the gains continue?

General Motors (GM -5.64%) recent run of strong sales in China continued last month as it recorded its highest September sales result ever. In July, GM's sales jumped 6.3% year over year as key rivals lost some ground. It followed that with an 11.9% gain in August and a solid 6.6% jump last month, setting up for a strong third-quarter regional result. But what's driving this success, and what will it take to ensure it continues?

GM and its joint ventures recorded a 6.6% gain in deliveries, compared to the prior year's September, to hit an incredible 366,305 vehicles. To put in perspective how impressive that is, General Motors' strongest non-Chinese competitor in the market is Volkswagen Group (VWAGY -10.85%) and despite posting a similarly strong September with deliveries rising 7.5%, its volume was just 310,500 vehicles. For Detroit's largest automaker, results were strong from nearly every brand in September, with Buick, Cadillac, and Baojun reaching all-time highs.

The driving force for GM's gains was SUV sales, which have remained strong all year and grew an incredible 63% year-over-year last month. Much of that incredible result can be credited to the Buick Envision, which delivered nearly 20,000 units on its own, and the Baojun 510 SUV, which delivered more than 39,700 units and notched its sixth consecutive month of being the brand's best-selling model. And while Cadillac's sales volumes fall far short of GM's lower-cost brands in China, it's recording excellent growth as well. 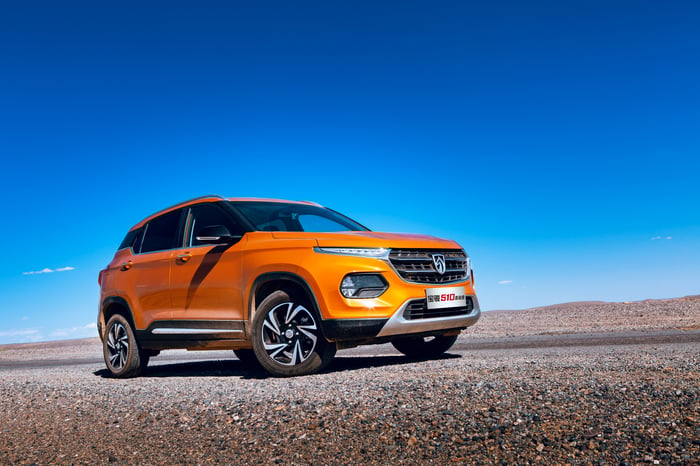 In the grand scheme of General Motors' success in China, the Baojun brand has worked very well. The strategy behind Baojun was simple: Offer Chinese consumers a brand that is as affordable as domestic options yet with the quality of an import. It's been a hit and the brand's sales spiked 51% in September, from 62,719 units to 94,718 units, and are up 43.7% year to date to 640,207 units.

What to expect near and long-term

What investors would do well to remember about GM's Q3 sales surge in China is that as the end of the year nears, so too does the end of a stimulative cut in the vehicle purchase tax. That's set to rise from its current 7.5% back to its normal 10% in January, so sales will likely continue to be strong for the rest of the year, then take a bit of a hit during the first quarter of 2018. But over the long term, for General Motors to continue competing for the title of the best-selling foreign automaker in China, it will have to transition to an electric-vehicle portfolio.

"Clearly we believe the Chinese market will have the highest [number of] electric vehicles most quickly, because of the regulatory environment," GM CEO Mary Barra said at Fortune's Most Powerful Women summit in Washington, D.C., according to Fortune. In fact, GM recently announced it would be launching 20 new all-electric vehicles by 2023, and two within the next 18 months. The automaker clearly believes in the all-electric market.

All in all, September was a continuation of a string of strong years for GM in China. It is proving it has strategies to succeed there with SUVs and low-cost brands in the near-term, and that it's prepared to develop the electrified vehicles necessary for the long-term -- and that is just what long-term investors should want to see.