AT&T (T 0.05%) provided an early disclosure of some of its earnings results earlier this week, and a few numbers stood out. The company expects to report nearly 300,000 DIRECTV Now net additions, but overall video subscribers declined around 90,000.

After a strong start with heavy promotions late last year, AT&T managed to draw in 267,000 subscribers within about a month of launching the new streaming-TV service. It suffered a hangover in the first quarter, though, adding just 72,000 net subscribers. And in the second quarter, it added 152,000 subscribers to the service.

To nearly double its second-quarter number and exceed its initial launch numbers in the third quarter is quite a jump. AT&T hasn't added any notable features or channels to the service, so it's worth asking where all of these new subscribers are coming from. 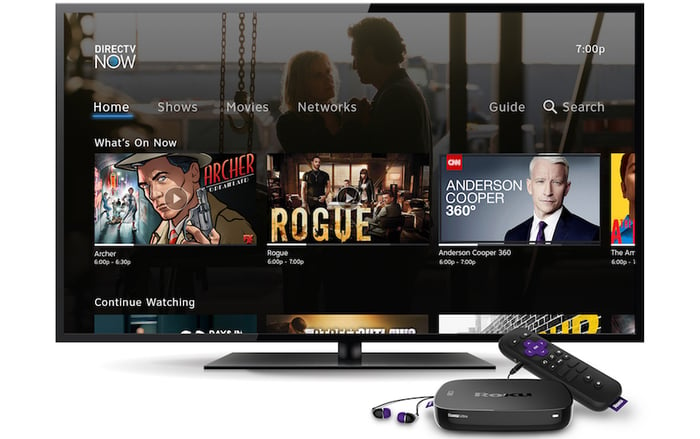 Sticking with what works -- kind of

AT&T's initial launch promotions for DIRECTV Now included a permanent discount on its second highest tier, as well as free streaming devices, for committing to one or three months of service. While a lot of people signed up, it seems most of them canceled after their-three month commitment expired.

Last quarter, AT&T ran several new promotions offering free streaming devices for customers who commit to one or three months of streaming again. The devices are usually worth as much as or more than the amount subscribers had to pre-commit. That could result in a similar situation to what happened with the launch and the subsequent hangover in the first quarter.

When AT&T rolled out its new unlimited data plans to all subscribers this year, it packed its high-end Unlimited Plus plan with a bunch of extras. One of those was a $25 credit if customers bundled their wireless plan with a video subscription.

Last quarter, AT&T extended that $25 credit to its less-expensive Unlimited Choice subscribers, although it limited the video service to DIRECTV Now. With the lowest tier of DIRECTV Now priced at just $35 per month, subscribers can add television service for just $10 per month. The company recently juiced the deal by throwing in free HBO.

While this ongoing promotion will probably produce less churn than its loss-leading streaming-device giveaways, it means AT&T is accepting a loss on its streaming service to increase its wireless subscriber numbers. Indeed, AT&T said it continues to see low postpaid churn levels after setting a record-low churn rate of 0.79% last quarter. It also said it expects to see a negative impact on its entertainment group margin.

AT&T's management says DIRECTV Now has a different target customer from its satellite service. The streaming service is aimed at people who wouldn't otherwise subscribe to television.

The problem is a growing number of television customers are abandoning traditional television, and more and more are signing up for streaming services like DIRECTV Now. Research group SNL Kagan expects 10.8 million traditional TV subscribers to cut the cord by 2021. Meanwhile, streaming TV services like DIRECTV Now will see total subscriptions reach 11 million in the same period. While it's not clear that every cord-cutter is signing up for a streaming service, it's almost certain some subscribers are replacing traditional TV with streaming.

To be sure, there's not much AT&T can do about it. If it doesn't offer a streaming service, there are plenty of other companies that will take the opportunity to enter the television market, such as Hulu, Sony, or YouTube. Nonetheless, it's very likely AT&T is still cannibalizing its own higher-margin products at least to some degree. That plays out in AT&T's pre-announcement, where it says it still lost around 90,000 video subscribers despite adding 300,000 DIRECTV Now subscribers.

The net adds for DIRECTV Now are impressive at first look, but digging into where those new subscribers are probably coming from presents a different story -- one that management probably doesn't want investors to pay too close attention to. Look for questions about DIRECTV Now on the company's earnings call later this month.