Forty-seven percent of U.S. teens prefer Snapchat over any other social network. Which apps are losing favor?

Snapchat's biggest strength is its highly engaged young user base. Snap (SNAP -0.69%) says its users under 25 spend an average of over 40 minutes per day using Snapchat. While Snap doesn't break out what percentage of its 173 million daily users are teenagers, anyone who knows anything about social media knows teens love Snapchat.

It's important to note that preference doesn't necessarily affect active-user numbers. Indeed, Instagram's active users have exploded in the recent past even as preference has declined slightly. That said, it's a good indicator for not only where Snapchat's users are coming from, but also for how Snapchat is taking a chunk out of the time spent in other apps, which is ultimately more important than a user count. 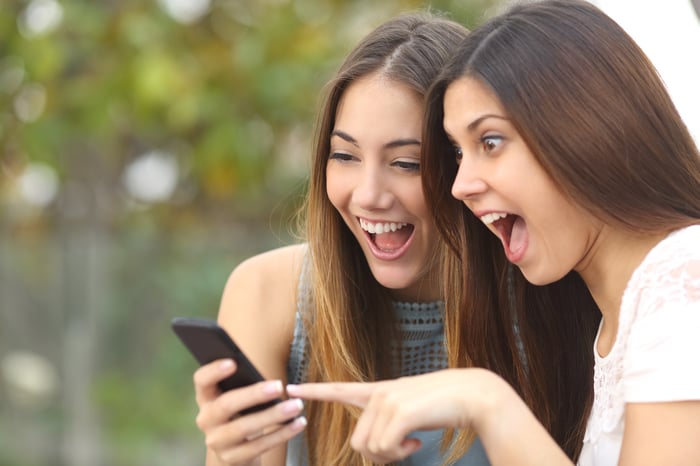 Believe it or not, teens used to prefer Twitter just four years ago. In the fall 2013 survey, 26% of respondents said Twitter was their preferred social network. Instagram and Facebook took 23% each. In the most recent survey, just 7% of teens said they prefer Twitter over competitors.

Twitter hasn't exactly gone mainstream, either. Many attributed Facebook's fallout with teenagers on the fact that more adults joined the platform, making it less "cool." That's not exactly the case with Twitter, which has seen its user growth stagnate over the past couple of years. Twitter's U.S. user base has increased less than 5% since the beginning of 2015. In the same time, teen preference for the network has fallen from 21% to 7%.

Twitter's biggest challenge is that Snapchat fills some of the same roles as Twitter. It's a communication tool for connecting with friends and broadcasting short messages. It's also a discovery tool to observe what's going on in the world and see what people are up to. It's a challenge Twitter has failed to deal with since Snapchat unveiled Stories.

As more teens join Snapchat, their need to use Twitter diminishes.

Facebook was also once the most preferred social network for teens, as was its subsidiary, Instagram. Both have fallen down the charts, but Facebook's fall has been more notable. While investors have worried about Facebook's teen problem since its IPO, it's only just now starting to show up in its active user count. Analysts estimate an accelerating decline in U.S. teen users on Facebook.

That said, teens are increasingly engaged on Instagram, which reported over the summer that users under 25 spend an average of 32 minutes per day in the app. Instagram has seen accelerated user growth since introducing Stories, a feature that directly copies one of Snapchat's core features.

Instagram is making up for less time spent on Facebook. Facebook said a year and a half ago that its users spent an average of 50 minutes per day between Facebook, Instagram, and Messenger. When asked this spring whether there was an update, management didn't give out another milestone number but did say average time spent continues to grow even with robust user growth on Instagram and Messenger.

What can Snapchat do with all those teens?

While Snapchat's user engagement is impressive, management faces a big challenge in serving ads to those users. Advertisers still aren't interested in spending money on Snapchat's ad products. Just 24% of advertisers in a survey from RBC Capital and AdAge earlier this year said they advertise on Snapchat at all. And nearly all of them spend less than 10% of their ad budgets on the platform.

Snapchat's shift to auction-based advertising puts pressure on ad pricing. Growing ad supply without much demand means advertisers can bid less per ad impression and still win the auction. Management expects the problem to correct itself as it brings on more advertisers, but it'll have to spend heavily on sales and marketing to bring more marketers on board. That's already starting to affect the company's operating margin.

While it's one thing to attract the attention of teens, Snap still has a lot of work to do to attract the budgets of marketers. Until it can show more progress on that front, teen preference for Snapchat over competitors such as Instagram doesn't mean a whole lot for Snap investors in particular.

That said, teens spending more time on Snapchat and taking away from time spent on competing platforms could have a very meaningful impact on those companies' performances. Twitter is struggling, while Facebook is finding ways to compete.