Advanced Micro Devices (AMD -1.95%) had been the go-to supplier of custom processors for video game console majors Sony and Microsoft. But NVIDIA (NVDA -2.46%) rained on AMD's parade when Nintendo (NTDOY -0.32%) decided to use a custom Tegra processor to power its latest Switch console.

Nintendo's "Switch" has been costly for AMD

Sales figures suggest that Nintendo has hit a home run with the Switch. The console has outsold both the PlayStation 4 and the Xbox One four times in the past six months in the U.S. Meanwhile, Switch sales have been very strong in key console markets such as Japan, selling over 1.5 million in just 26 weeks, a figure that the PS4 took 69 weeks to hit.

Not surprisingly, Nintendo now aims to sell 15 million Switch consoles during its first year as compared to the original expectation for 10 million units. Now, NVIDIA reportedly makes $50 on each Switch console, so it stands to win big with this device in the long run given a potential lifetime production forecast of 40 million units.

By comparison, Sony has reportedly sold just over 60 million PS4s in just over three years since launch, which means that the Switch is not a slouch. Therefore, AMD has lost a big opportunity by failing to land a spot in the Switch, especially considering that Nintendo had previously used AMD's chips to power the Wii U console.

But AMD's latest design win in the console space could be a game-changer and help it counter NVIDIA's newly found momentum in the console gaming space.

Atari has decided to make a comeback in console gaming hardware with the Ataribox console, and it has selected  AMD's custom processor and Radeon graphics chip to power the new device. Now, Atari is going all out to make its new console a success as evident from the aggressive price range of $249-$299. 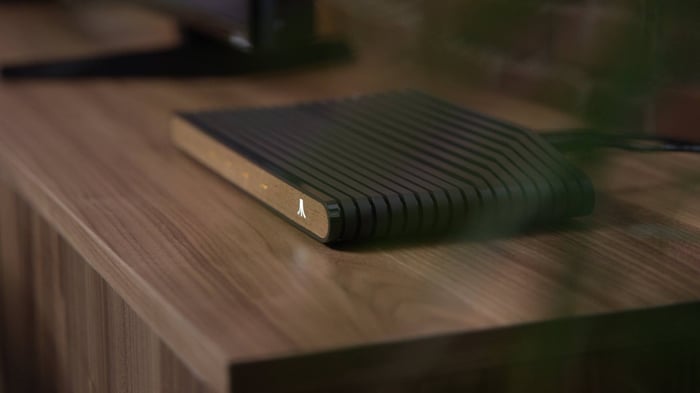 The Ataribox's popularity could soar thanks to its varied abilities and open-source nature. The console will be running a Linux-based operating system, allowing gamers to play games bought on other platforms, according to Atari.

The Ataribox will also double up as a home entertainment device thanks to SD card support, USB and HDMI ports, and Ethernet connectivity, enabling consumers to stream video, music, browse the web, and launch apps. Furthermore, the game publisher has decided to pre-package the Ataribox with a collection of classic and popular Atari games, which could kick-start its sales thanks to the publisher's brand value.

In fact, 900 cartridges of one of Atari's worst-rated games -- E.T. the Extra-Terrestrial -- found buried in New Mexico were auctioned for a jaw-dropping price of $108,000 two years ago. The title was originally launched in 1982, which indicates that enthusiasts are still willing to spend an average of over $1,500 per cartridge of one of its legacy games.

Therefore, Atari's modern take on console gaming could help it make a comeback in this space after years. Furthermore, as Atari is looking to deliver a full-PC experience on the TV to customers, it won't be surprising if it can capture a slice of the PC gaming market as well. This might be possible due to the Ataribox's open-source operating system, and a combination of AMD's processor and GPU (graphics processing unit) that could help it tap both console and PC gaming enthusiasts.

The gaming hardware market was worth  $30 billion last year, and it could grow at an annual pace of 6% through 2019, giving AMD the opportunity to boost its chip sales through Atari gaining a slice of that pie. Furthermore, AMD investors shouldn't forget that the Ataribox can open a new opportunity in the streaming TV device market that's growing at a terrific pace of over  17% a year.

Therefore, the Ataribox's versatility could breathe life into AMD's console business once again after it lost a chance to capitalize on Nintendo's latest device earlier this year.