Why were shares of the investment bank down after its third-quarter earnings came in well above analysts' expectations?

Going into earnings season, it looked like it would be a bloodbath for Goldman Sachs (GS 5.79%) given the anticipated decline in trading revenues at Wall Street banks in the three months ended Sept. 30. But that didn't turn out to be the case.

When Goldman Sachs reported earnings on Tuesday, its results handily outperformed analysts' expectations. The bank generated $8.3 billion in revenue and $2.1 billion in net income, both of which were 2% higher than the year-ago quarter. It earned $5.02 per share, up from $4.88 in the third quarter of last year. Analysts had expected the bank to earn $4.17 per share.

"Our overall performance this year has been solid and provides a good foundation on which to execute and deliver our growth initiatives," said Lloyd Blankfein, chairman and CEO of Goldman Sachs. The investment bank's trading unit did in fact take a hit. Fixed-income trading, which produces more revenue for the bank than any other individual unit, saw revenue decline 26% on a year-over-year basis. Equities-related sales and trading revenue was 7% lower.

Net revenue in its fixed-income trading unit fell by $512 million, which alone would have amounted to a 6.3% drop from the bank's total revenue in the year-ago quarter.

But the bank was able to make up for the shortfall in other areas. Most of the deficit was covered by a $485 million increase in net revenues in Goldman's investing and lending operations, the vast majority of which stemmed from a gain in equity securities, which rose $471 million. 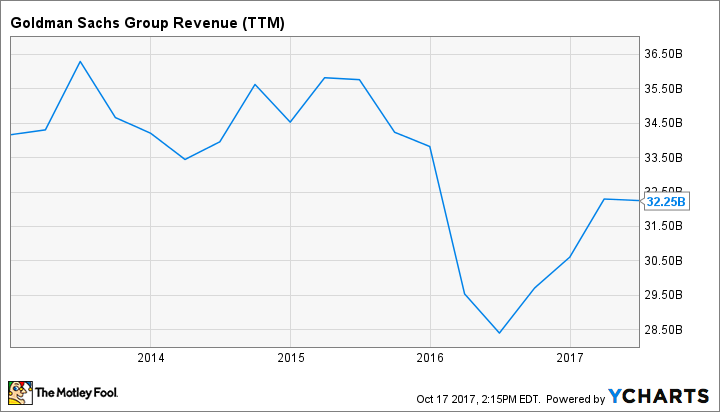 The increase in gains from investments in private equities was "positively impacted by corporate performance and company-specific events," the bank said.

Goldman also saw its investment banking segment, which primarily provides advice on mergers and acquisitions and underwrites securities, pick up a lot of slack. Revenue in the unit grew by $260 million, or 17%.

It was the combination of these, in conjunction with a 3% increase in net revenues from its investment management segment, that propelled Goldman's earnings per share so far beyond the consensus estimate going into earnings season.

It also explains why Goldman's shares nevertheless dropped by more than 2% after the better-than-expected results were released. Namely, while the bank was able to record a surge in investment gains, its bread-and-butter trading operations remain mired in a sustained decline.