Electric-car maker Tesla (TSLA 1.24%) knew its Supercharger network would be a key selling point for its vehicles. That's why it has aggressively expanded the network to include over 1,000 locations and 7,032 chargers.

Tesla also knew its Model 3, in particular, would put its network to the test. After all, Tesla hopes the lower-cost vehicle will help annual production increase about fivefold by the end of the next year. To this end, Tesla has made some changes to its Supercharger program and has continued to expand the network to make sure it's ready to handle higher charging demands.

Tesla is now clarifying one of the most important ways it's ensuring it will be able to support its fast-growing vehicle fleet, while continuing to expand its Supercharger network.

Now, Tesla is clarifying its stance on the Model 3's access to its fast-growing Supercharger network. The 400 kilowatt-hours of free Supercharging -- about 1,000 miles -- that come standard with Model S and X annually will not be included for Model 3 owners. In addition, the Model 3 will not be included in Tesla's referral program that gives Model S and X buyers free unlimited Supercharging.

Tesla first announced its pay-per-use Supercharger model in November of last year. Fees for Supercharging would "cost less than the price of filling up a comparable gas car," Tesla said. Tesla also said the pay-per-use model would help Tesla expand its Supercharger network and provide customers with the best possible charging experience. 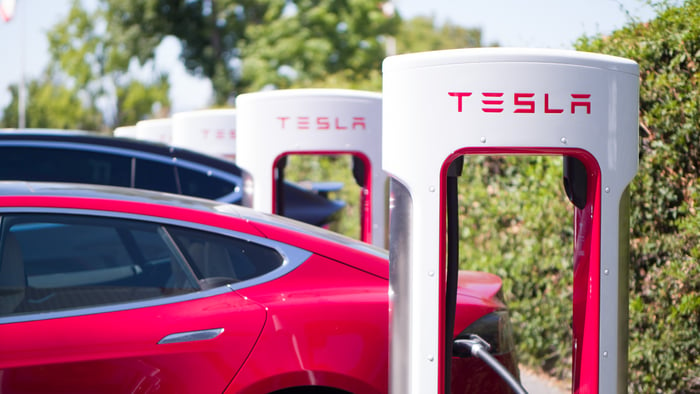 Beyond not including 400 kilowatt-hours of free Supercharging for Model 3 each year, Tesla has implemented a series of other updates to its Supercharger program to prepare for the Model 3. Tesla implemented an idle fee for vehicles that remained at a Supercharger location more than five minutes after a charge was complete. In addition, Tesla started providing more information to travelers about the status of Superchargers. More recently, Tesla started deploying an urban version of its Supercharger to make daily charging easier in populous areas like supermarkets, shopping centers, and downtown districts.

But the most important priority for Tesla's Supercharger network is its expansion. This is why, at the Model 3's final unveiling, Tesla said it's tripling its total Superchargers from about 6,100 at the time of the event to 18,000 by the end of 2018. With Tesla planning for the fees garnered from its pay-per-use model to be used to help the company reinvest in the Supercharger network, the Model 3 could eventually become Tesla's biggest Supercharger revenue source, playing a key role in the network's ongoing expansion.