Obamacare enrollment may have dropped, but rising enrollment in Medicare and Medicaid fueled revenue and profit growth.

UnitedHealth Group (UNH 0.53%) is the largest health insurer in the country, and strong financial results in the third quarter show the company's still growing in spite of its decision last year to discontinue selling Obamacare plans in most states. Baby boomers' interest in Medicare Advantage plans is a big reason this company's sales and earnings are still increasing, but with health insurance reform looming, can UnitedHealth Group continue delivering upside to investors?

UnitedHealth provides insurance coverage to individuals directly, through their employer, or through government programs, including Medicare and Medicaid. 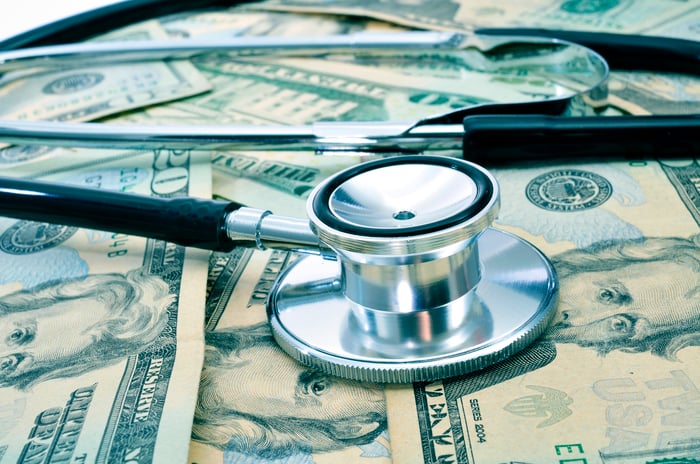 In the past year, enrollment in UnitedHealth's plans grew by 1.9 million people to 49 million. The company's Part D drug plans provided coverage to an additional 4.9 million people during the quarter.

In the commercial market, individual enrollment, including Obamacare, fell to 515,000 from 1.5 million one year ago. Employer-based enrollment growth of 270,000 people offset some of that decline.

Membership and premium growth this year translated into health insurance segment premium revenue of $40.7 billion, up 9.6% from Q3 2016. Total third-quarter revenue, including revenue from Optum, its pharmacy services, and analytics business clocked in at $50.3 billion, up 8.7% from one year ago.

UnitedHealth's bottom-line performance was even better because walking back from the Obamacare exchanges improved the overall health of member pool and reduced the amount of premium revenue spent on healthcare. Its medical care ratio was a healthy 81.4% in the quarter as medical reserves developed favorably by $310 million, partially offsetting an increase in deferred health insurance tax. The company also saw important improvements in operating costs and costs of products sold relative to sales that contributed to strong income growth in the period.

Operating income increased 14.2% to $4.1 billion, and net income shot up 26.3% to $2.5 billion. After adjusting the income statement to take into consideration all of the company's quarterly puts and takes, adjusted earnings per share was $2.66, up from $2.17 last year.

What's next for this big insurer

The quarterly performance brought earnings per share through the first nine months of 2017 to $7.49, up from $5.94. UnitedHealth's management now thinks that adjusted earnings per share will approach $10 this year. For perspective, management was predicting full-year adjusted EPS of between $9.30 to $9.60 in January.

The wildcard facing this company and its peers in the future, though, is health insurance reform. UnitedHealth has already mostly stopped selling Obamacare plans on state exchanges, so repealing Obamacare provisions won't impact it as negatively as it might its peers. It could face stiff headwinds to its Medicaid enrollment if Medicaid expansion is rolled back, though. There could also be headwinds if an outright repeal leads to employers discontinuing the plans they put in place because of Obamacare requirements.

Overall, I don't think changes relating to individual insurance will have too much of an effect on UnitedHealth in 2018, but I do think there's an important longer-term risk of reform crimping its Medicaid business and since Medicaid represents a more substantial proportion of its business than it did prior to Obamacare's passage, investors will want to watch carefully how Congress tackles funding Medicaid expansion.

Is This Hot Dividend Stock a Buy for Growth Investors?
413%