The company says it will pursue higher volumes as competitors continue to lower fares.

Spirit Airlines (SAVE 2.98%) is having a rough year. Following a costly dispute with its pilots in May, the airline's operations were severely disrupted by Hurricanes Harvey and Irma. On top of that, an ongoing price war with United Continental (UAL 2.88%) has lowered fares across many of Spirit's markets, causing the company to slash its Q3 unit revenue guidance.

However, at a recent investor conference, Spirit CFO Ted Christie and Chief Commercial Officer Matt Klein talked at length about how the company plans to respond to these latest competitive threats and maintain profitability. For the last nine months, Christie noted that Spirit has been trying to lift yields (the average fare paid per passenger, per mile). While that was successful to a point -- witness Spirit's Q2 2017 unit revenue growth of 5.7% -- it becomes a difficult strategy to sustain when other airlines want to compete more on price. So, given the current competitive environment, Spirit's other option is to pursue high volumes and low fares, which can also be very attractive when combined with the airline's low-cost structure and ancillary revenue model (e.g., charging for advance seat selection, food, baggage, etc.).

So what we're going to do now is focus on how we can improve our volumes, drive load factor -- which is beneficial in our model because we have a very high ancillary production. We generate north of $50 every time we get somebody on the airplane and we've said that for years. And so I think over the last nine months or so, as we've been intentionally trying to move yield, our load factors have fallen as part of that experiment. And so instead we may just pursue option B, which will drive more load factor and benefit us in that direction. So, the point being that the company has alternatives and we intend to pursue them. We feel good about either path, by the way. We can live in both environments.

Growth may focus on larger markets

In recent investor presentations, Spirit claimed there are more than 500 available routes that would meet its thresholds for passenger volume and operating margin. However, given that it only intends to add 125 of these routes over the next five years, investors must wonder whether pursuing a volume strategy would affect Spirit's route selection or the types of cities it chooses to service.

[H]igher fares require certain kinds of markets. Everybody and every market likes low fares. So the opportunity set to grow actually expands and becomes more attainable when you have this idea that we're going to push low fares and go for more volume. It just opens it up ... So, from my perspective, lower fares and more volume actually gives us more opportunity to think about all kinds of markets. Some of the smaller cities may not be able to handle higher fares. Big markets can handle all kinds of fares.

What if deep discounting is the new normal?

The bigger long-term question is how Spirit's business model will fare if the legacy carriers continue to engage in price matching indefinitely. Even before this latest round of discounting, the last couple of years have seen some of the legacy carriers roll out a comparable class of service to compete with Spirit's ultra-low fares. If this type of competitive behavior is here to stay, is the growth party over for Spirit?

What matters in our game the most is cost structure. And we champion that. We talk a lot about it. And simple economics favor low cost when you're selling low fares. And we think we can do that in a multitude of environments. And we've shown that over the company's evolution, that in crisis, in recession, and spiked oil prices, and very competitive environments -- which have existed now for the better part of two and a half years -- we've been very successful in all of that. And so, I think that rumors of the death of the [ultra-low-cost carrier] are clearly overstated, that people like low fares, and at the end of the day, low costs are going to deliver those low fares better than anyone else. And math matters. 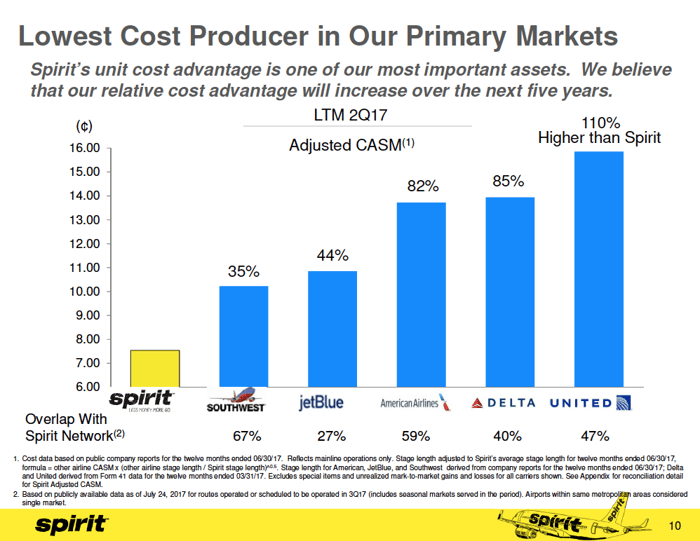 While unit revenue will remain under pressure for the foreseeable future, it's clear Spirit feels confident in its ability to pivot to a higher-volume growth strategy -- or perhaps even pivot back and forth between pushing yields and pushing flight volumes as conditions require. And Christie also mentioned that Spirit has maintained high margins in either type of environment. What should be heartening for investors is that, regardless of which growth path the company chooses, the huge cost advantage Spirit enjoys over its competitors isn't going anywhere.

In fact, Spirit believes it can actually expand its relative cost advantage over the next five years. Which means the likelihood of a yearslong price war with United -- whose adjusted unit costs are around 110% higher than Spirit's -- seems fairly low.