Investors came into Spirit Airlines' (NYSE:SAVE) Q2 earnings report expecting an improved revenue picture that would help boost earnings for the remainder of 2017. Instead they got a clear picture of just how much Spirit's spate of May cancellations cost the company, and an unexpected ugly outlook for the back half of the year to boot, sending shares plummeting near 52-week lows. Despite basically meeting expectations on the top line and beating on the bottom line, Spirit delivered -- in CEO Bob Fornaro's own words -- a "disappointing" quarter. 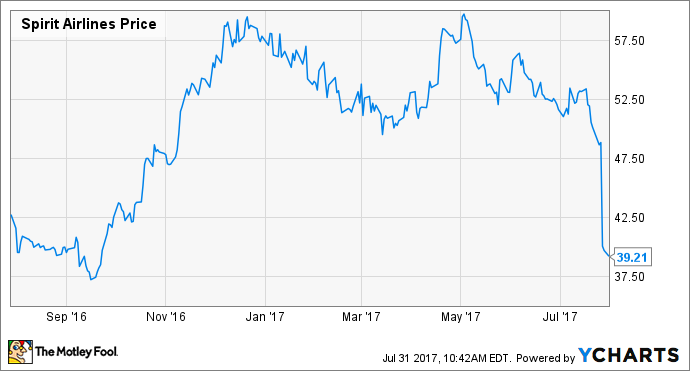 Spirit revealed the extent of the damage caused by a wave of flight cancellations that began in May, when its pilots stopped volunteering to work overtime. During the quarter, Spirit canceled more than 850 flights, resulting in $25 million in lost revenue, as well as an additional $20 million in operating costs related to reaccommodating passengers. Spirit says that if those cancellations hadn't happened, its TRASM (total revenue per available seat mile) would have increased by 6.5% (instead of the 5.7% it reported) and its adjusted CASM ex-fuel (cost per available seat mile, excluding fuel) would have risen just 2% (instead of the 10% it reported).

Though things have mostly returned to normal, Spirit says its completion factor (the number of flights completed, whether on-time or not) is currently around 96.5%. The company believes that for the remainder of the year, it can get that number up to roughly 98%. But this would still be below the 99% or so that the company achieved during the same period in 2016, implying that the company's reliability issues aren't over yet. The revenue story for the quarter mostly played out as expected, as Spirit continued to make progress with revenue-boosting initiatives including dynamic pricing of seats, and benefited from trends in fare pricing. Fornaro noted that this was the first time in two-and-a-half years that either passenger revenue or non-ticket revenue increased year over year. Moreover, Spirit's quarterly TRASM growth of 5.7% actually beat its last guidance update, which called for 5.5% growth. And passenger yields (the average fare paid per mile, per passenger) rose 7.1%.

Despite those encouraging results, however, Spirit issued an out-of-the-blue gloomy outlook, saying that in late June, it began noticing a more competitive environment in a few markets and is now experiencing "deeper discount levels than we have experienced yet this year" in many more. Just as it was beginning to experience some success in boosting prices, Spirit is now being forced to hold fares down during the peak summer travel period to stay competitive.

Spirit had previously stated that it expected to see unit revenue growth through the remainder of 2017. However, these recent pricing developments caused management to issue guidance for a Q3 TRASM decline of 2% to 4%. The company said 150 to 200 basis points of this expected decline is related to the fallout from its Q2 cancellations, as it likely caused potential customers to book their summer vacations with other airlines.

Operating margin will remain under pressure for the rest of 2017

In spite of the large additional costs caused by the cancellations (adjusted operating expenses rose 25%) -- adjusted operating margin came in at a respectable 19.1%. Though that's down from 22.3% last year, it's well within Spirit's ongoing "mid-teens" or higher target. However, the significant CASM ex-fuel costs for this quarter will put pressure on full-year margins as well. Spirit now expects its CASM ex-fuel will increase 2% to 3% for 2017, a big change from its prior guidance of flat to down 1%.

The Q2 cancellations debacle shows Spirit still has a long way to go to improve its operational reliability, a goal the company had been making real strides toward before the events of the past few months. That said, Fornaro stated that he believes Spirit's positive efforts in this area have already begun to pay off in the form of higher yields.

For the 12 months that ended in April 2017, Fornaro noted that Spirit's on-time performance increased by 9.5 percentage points over the prior year, continuing to close the gap between Spirit and the industry average. Of course, that statistic conveniently ignores the chaos that the company began suffering the following month. According to Department of Transportation statistics, in April 2017, Spirit's on-time performance reached 77%, just 1.5 percentage points behind the industry average. In May, however, only 69% of Spirit's flights arrived on time, compared to the industry average of 79.1%.

As is now evident, the May cancellations were a serious blow to Spirit's public perception -- and its financials. As Spirit's operations begin returning to some sense of normalcy, the company will now face an even tougher task in convincing customers that the Spirit experience is better than its reputation suggests.