Spirit Airlines (NYSE:SAVE) will release its second-quarter earnings on July 27. Following more than two years of quarterly declines, Spirit is forecasting a return to unit revenue growth, which should also pave the way for a return to earnings growth later in the year. Here are three key areas to examine to help determine whether the airline's long-term potential remains intact. 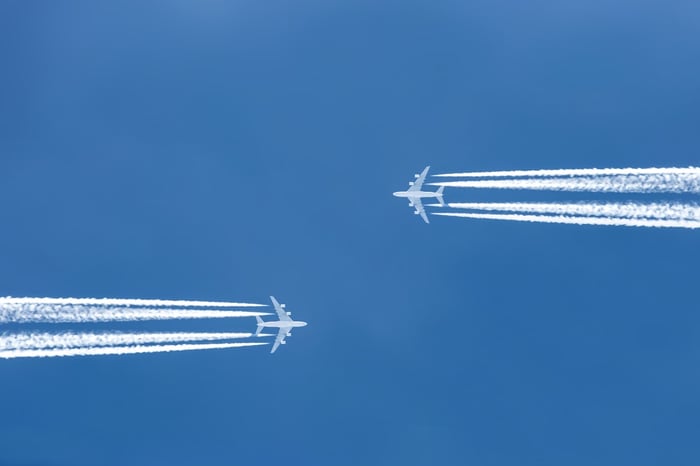 With the upcoming quarter benefiting from the Easter shift, Spirit originally issued Q2 guidance of 4.5% to 5.5% unit revenue growth. However, Spirit suffered a fairly major business interruption when its pilots stopped working overtime in May, causing the cancellation of hundreds of Spirit flights over several days. Though things are more or less now back to normal, this was extremely costly for the company, causing Spirit to lower its Q2 guidance to 4% to 5% unit revenue growth due to the lost revenue associated with customer refunds, growth which would still have been a welcome result for investors after such a prolonged period of decline. However, on July 17, management released another update with the final data now in, saying its unit revenue came in at the high end of its initial guidance, increasing approximately 5.5% for the quarter -- the result of being able to rebook many of the affected passengers on other flights.

Now that Spirit's flight schedule appears to be relatively stable again, the good news is that management says it continues to see signs of a strong pricing environment that should help fuel unit revenue growth for the remainder of the year. Along with an expected capacity (available seat miles) increase of 17% to 17.5% for 2017, Spirit's top line appears to be primed for healthy growth in the quarters to come.

Spirit's margins are already under pressure, as competitors have rolled out a new class of fares designed to compete with Spirit's rock-bottom prices. In 2015 and 2016, Spirit's operating margin was north of 20%. But last quarter, that number fell to 11%. As it enters the higher-demand portion of its fiscal year (Q2 and Q3), Spirit originally expected a big improvement this quarter, noting that while its cost per available seat mile (CASM) excluding fuel increased by 0.5% last quarter, it was guiding for flat to negative CASM ex-fuel for full-year 2017.

However, after its wave of May flight cancellations, Spirit also updated its Q2 CASM ex-fuel guidance, expecting this number to rise between 9.5% and 10.5%, due mostly to the cost of reaccommodating its disrupted passengers. That large increase will ding Spirit's operating margin, but the damage should be limited to this quarter, as the company's non-fuel unit costs still look set to decline later this year. And with fuel prices providing some relief as well lately, Spirit's margins should be able to rebound strongly during the second half of 2017. But whether the company will be able to meet its target "mid-teens or higher" operating margin range for the full year remains to be seen.

Spirit has been making real, measurable improvements in its customer experience over the last several quarters. This initiative has been of primary importance to CEO Bob Fornaro since he took the reins in January 2016.

According to the U.S. Department of Transportation, during Q1 2017, Spirit continued to close the gap with its rivals in terms of on-time arrivals. And the company's complaint ratio (its number of complaints per 100,000 passengers) dropped more than 50% from 11.03 to 4.61.

However, the fallout from May's wave of cancellations -- including an angry mob scene at Spirit's hub in Fort Lauderdale, Florida -- is exactly the kind of negative publicity the company can't afford, especially while the airline is trying to prove it's more reliable than people may think.

Spirit's on-time arrivals record and complaint ratio for Q2 are going to look downright ugly, and there are lingering concerns that Spirit is still suffering a higher-than-normal rate of cancellations. Investors will want to hear what Fornaro has planned to help push things back in the right direction.

Assuming Spirit can get its reliability issues under control, the company's shares are looking attractive, sitting at a trailing-12-month P/E of 15.4, and a forward P/E of just 12.5. While Spirit may not return to earnings growth this quarter because of the increased costs associated with its cancellations, the return to unit revenue growth should be the start of better times for investors. 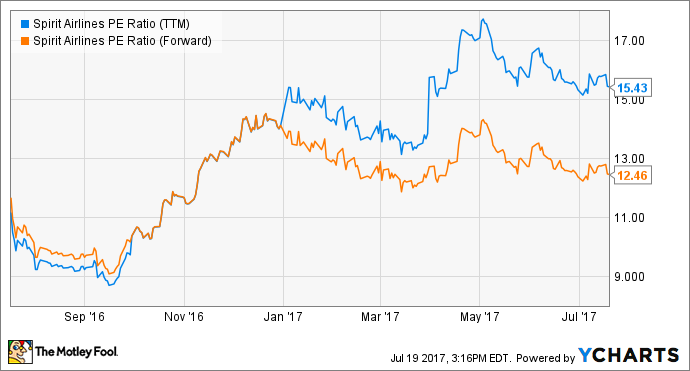 In the second half of the year, operating margin and net income look set for a strong rebound. And if Spirit can eventually make lasting improvements to its poor public perception as well, today's prices should look like a real bargain.