Three months ago, I named Canada's Magna International (NYSE:MGA) one of my favorite lowest P/E stocks to buy today. The stock is up 16% since, but that's not even the best news.

This morning, analysts at American megabanker Bank of America-Merrill Lynch announced they are upgrading shares of Magna International stock to buy and assigning the stock a $63 price target, implying nearly $10 more upside to this stock's magnificent run. 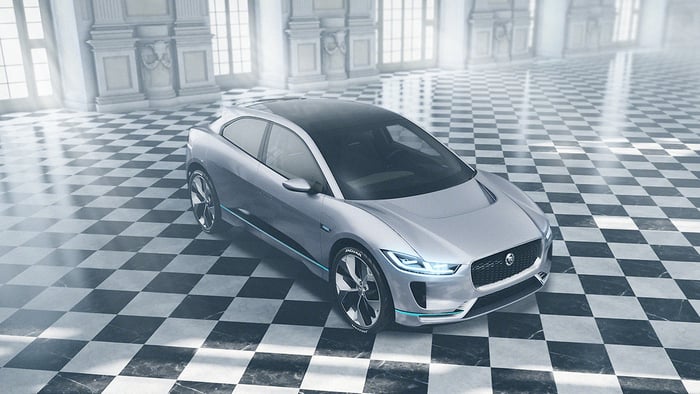 Magna International is building an electric car for Jaguar. Could Magna stock build wealth for your portfolio, too? Image source: Jaguar USA.

Let's start with the headline news. Up until this morning, Merrill Lynch -- ranked in the top 5% of investors we track on Motley Fool CAPS -- had been advising investors to sell out of Magna International stock. Given that Magna stock has outperformed the rest of the S&P 500 (31% vs. 19%) over the past year, that advice seemed reasonable. Why not cash out when you're ahead?

Except that now, Merrill seems to think that Magna is doing so well that it will keep extending its lead over the rest of the stock market. As the analyst explained in a note this morning on StreetInsider.com (requires subscription), Magna International possesses "expertise" in "numerous" automotive component systems that it makes for automotive original equipment manufacturers (automakers). This knowledge of how the parts all fit together "could afford the company more opportunities in contract manufacturing with traditional OEMs along with new industry entrants."

2. One Fool's already a fan

And that's just the start of it. TheFly.com (requires subscription) expands on coverage of Merrill's Magna upgrade: Magna has "a unique competitive advantage" over other car parts makers. More than just making parts, Magna's "proprietary technology, expertise, and trusted reputation" permit it to build entire "production-ready models" of cars -- even electric cars -- for other manufacturers.

According to TheFly, this ability to build production-ready models "sets the company ahead of the competition," in Merrill Lynch's view, and makes Magna "one of the best-positioned suppliers over the long-term ... to continue to win business and grow revenues ahead of market growth."

3. Magna's been magnificent for a very long time

I've been watching Magna for nearly a decade now -- since at least July 2009, when shares were trading for less than $10. In that time, Magna has more than quintupled in value. Merrill Lynch's latest upgrade promises Magna stock will add more value in the next year than the entire stock cost five years ago. What are the chances of that happening?

Actually, given the valuation, I think the chances are pretty good. Over the past 12 months, S&P Global Market Intelligence data confirm that Magna International generated $1.7 billion in positive free cash flow. That's not quite as much as the $2.1 billion in net income the company reported under GAAP, but it's still good enough to give this $19.3 billion company a price-to-free-cash-flow ratio of 11.4.

Given that analysts expect Magna to grow profits at about 10% annually over the next five years (and Merrill seems to think it may do even better), and given that the stock is paying a market average 2% dividend yield (which at only a 19% payout ratio, is a dividend Magna could afford to expand), the stock looks to me to offer about a 12% total return --- and maybe more.

Admittedly, there are still reasons to hesitate before recommending Magna International stock. Magna carries a sizable slug of debt, for example -- about $2.8 billion net of cash on hand. That pushes the stock's enterprise value-to-free-cash-flow ratio up to 13, or about 1 above what I'd ordinarily want to pay for a 12% total return.

If Merrill Lynch turns out to be right, though, and if Magna stock continues to outperform what Wall Street expects of it, this stock could continue to be a long-term winner.