The credit card giant is completing its two-year turnaround plan.

American Express (AXP -1.21%) has spent the past two years working through a turnaround strategy after ending its relationship with Costco Wholesale Corporation (COST -2.42%), which had accounted for 10% of American Express cards in circulation. From the looks of the credit card company's third-quarter earnings, reported on Wednesday, it has made considerable progress in this regard.

American Express earned $1.4 billion in the three months ended September 30, up 19% from the third quarter of last year. On a per-share basis, that equated to $1.50, up 25% on a year-over-year basis. Analysts expected American Express to earn $1.47 per share.

"We are completing a two-year turnaround ahead of plan with strong revenue and earnings growth across all of our business segments," said Kenneth Chenault, chairman and chief executive officer. "We've added products and benefits, shown continued strength in acquiring new customers, and expanded our merchant network." Total revenue came in at $8.44 billion for the quarter. That was short of the consensus estimate, which called for revenue of $8.53 billion, but it was nevertheless a 9% increase over the year-ago period.

American Express' strongest segment was its international consumer and network services, which issues consumer credit cards to people outside the United States. The unit saw its net income climb 85%. This was propelled by a 7% rise in the segment's revenue, combined with a 2% drop in its expenses.

Its next best showing was in its U.S. consumer-services segment, which issues credit cards to U.S.-based customers and is American Express' largest operating unit. Earnings in this unit increased 18% year over year. This segment also experienced positive operating leverage, though to a less significant degree, with revenue growing 13% and costs up by 6%.

In third place was American Express' global commercial services, which issues corporate and small business cards and provides payment and expense-management services to companies around the world. Net income in this unit during the quarter was up 14% compared to last year.

Finally, the company's global merchant services, which operates a global payments network that processes and settles credit card transactions, also saw its prospects improve over the past 12 months, though to a smaller degree than the other three segments. Net income gained 3% year over year in the third quarter. 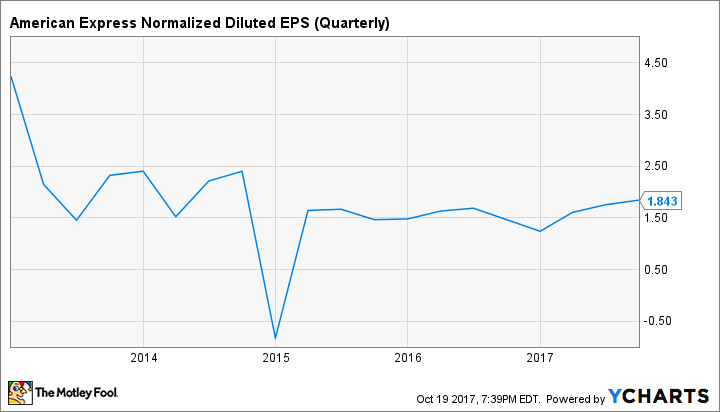 Chenault to step down

In addition to reporting earnings, American Express announced that Chenault will retire next year. He's led the company since 2001, qualifying him as the longest-serving executive of a major financial firm in the United States right now.

"I've treasured every day of my 37-year career here," Chenault said on the bank's quarterly earnings call with analysts. "It's been a journey that spanned profound changes in the world of business."

"Ken's been the gold standard for corporate leadership and the benchmark that I measure others against," said Warren Buffett in the statement -- Buffett's Berkshire Hathaway is the largest shareholder of American Express. "He led the company through 9/11, the financial crisis and the challenges of the last couple of years. American Express always came out stronger."

Chenault will be succeeded by Stephen Squeri, the vice chairman of American Express since 2015. Squeri will assume the role of CEO on February 1.

American Express' stock fell marginally on Thursday, the first day of trading after the company reported earnings. Its shares slid 0.20% during the day's trading session. Year to date, they're up 24%.