Please ensure Javascript is enabled for purposes of website accessibility
Log In Help Join The Motley Fool
Free Article Join Over 1 Million Premium Members And Get More In-Depth Stock Guidance and Research
By Dan Caplinger - Oct 19, 2017 at 9:21AM

Find out what the tobacco giant's third-quarter results signaled for its future.

The tobacco industry is in the midst of a major transformation, and Philip Morris International (PM 0.47%) has led the surge away from traditional cigarettes toward reduced-risk products like its iQOS heated tobacco platform. Investors have been nervous about the prospect for losing what has been an extremely lucrative business for decades, but the company has been optimistic about the strong reception iQOS has gotten in key test markets and believes that it can use innovation to get past what it sees as a short-term bump in the road.

Coming into Thursday's third-quarter financial report, Philip Morris investors wanted to see a nice jump in revenue and earnings, showing a rebound from what have been extremely difficult conditions in recent years. Unfortunately, Philip Morris once again had to deal with adverse currency impacts, and even as iQOS ramps up, reductions in guidance for the full 2017 year continued to hurt sentiment among shareholders. Let's look more closely at how Philip Morris International did and what lies ahead for the tobacco giant. 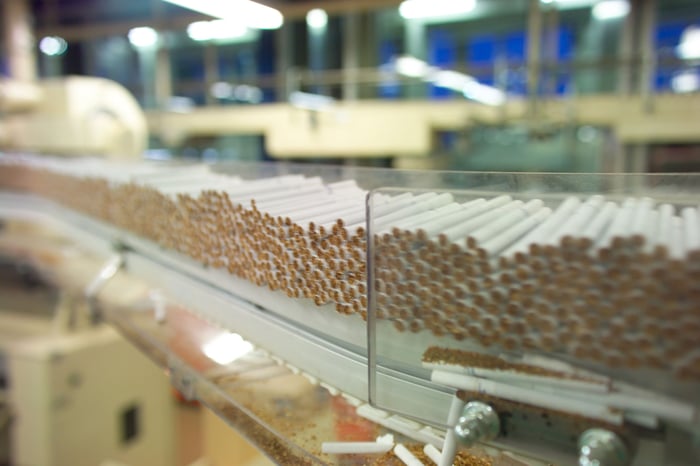 Why Philip Morris had another disappointing quarter

Philip Morris International's third-quarter results fell short of the figures that most investors wanted to see. Revenue net of excise taxes came in at $7.47 billion, up 7% from the year-ago quarter but still well short of the double-digit percentage growth that those following the stock were expecting. Net income of $1.97 billion was up just 1.7%, and the resulting earnings of $1.27 per share were far below the consensus forecast for $1.35 per share.

Difficult issues were visible throughout the report. Currency impacts reared their ugly head yet again, hurting earnings by $0.12 per share and costing Philip Morris about two percentage points of potential revenue growth. Overall cigarette shipment volume fell more than 4% to 198.5 billion units, and even when you add in the big gains in iQOS shipments, total unit volume was down slightly from year-ago levels. The key Marlboro brand suffered a 6% drop in volume, and only substantial gains for Chesterfield were able to keep the damage from being far worse for Philip Morris.

Weakness was evident across the globe. All four of Philip Morris' geographical segments posted declines in cigarette shipment volumes, with the European Union faring the worst even as Asia held up the best. Only in Latin America and Canada was Philip Morris able to post higher revenue from combustible products, using its pricing power to offset falling volume. Yet on the bottom line, there were clear winners and losers, as segment operating company income soared 40% in Asia and by nearly a fifth in the Western Hemisphere, offsetting a 20% drop in the Eastern Europe, Middle East, and Africa segment. The EU also posted operating income declines.

Again, the bright spot came from iQOS. Unit shipments quadrupled in Asia to more than 8.8 billion, and ramping up in Europe continued. Revenue from reduced-risk products was up almost 350%, and that helped support massive gains in overall total revenue in the Asian region.

CEO Andre Calantzopoulos put a positive spin on the results. "We recorded a sequential improvement in our total volume performance," Calantzopoulos said, "driven by both our combustible and reduced-risk products, and grew our international market share." The CEO pointed to "adverse developments" in Russia and Saudi Arabia as pressuring its performance, but the company is confident that it can deliver currency-neutral earnings gains of 9% to 10%.

Yet what most of those following the stock focused on was Philip Morris' decision to cut its guidance for the full 2017 year. The tobacco giant now expects earnings of $4.75 to $4.80 per share, down between $0.03 and $0.13 per share from its projections last quarter. Only some of that impact will come from currencies, with the company expecting a $0.17 per share overall hit from the strong U.S. dollar. The 9% to 10% earnings growth range represented a move to the lower end of its prior range, which extended up to 12%.

Philip Morris shareholders responded negatively to the news, and the stock fell 4% in pre-market trading following the early morning announcement. Even with iQOS doing well, Philip Morris needs to find a way to cushion the blow of falling cigarette demand across the globe. Otherwise, the transition to reduced-risk products will only get bumpier in the years to come.