It's now been over a year since Apple (AAPL 1.62%) reduced its cut of in-app subscriptions. The Mac maker announced the change way back in the summer of 2016, dropping its traditional 30% cut to 15% after the first year, encouraging third-party developers and services to nurture long-term relationships with customers.

At the same time, 30% is a lot to ask for when it comes to ongoing subscriptions where Apple does very little beyond operating the App Store. Apple's cut was so high that it could even be prohibitively expensive for smaller players, and changing the revenue-sharing model was welcome news for the platform. I still suspect that some prominent third-party services may have been able to score discounted deals prior to the broader policy change, but that theory is kind of moot at this point.

Alphabet (GOOG -0.27%) (GOOGL -0.21%) subsidiary Google has just finally announced that it is adopting an identical policy for the Play Store, according to The Verge.

The search giant will keep the standard 30% for the first year of a subscription before reducing that take to 15%, effective January 2018. Seeing as how this change is easy to implement on a technical level, the most surprising part is that it took the search giant this long to match Apple's terms. It's been just over a year since the change took effect on iOS (September 2016), so some of those paid subscriptions are just now falling to the 15% level, directly translating into more money going into the developers' pockets.

In other words, offering subscriptions through the Play Store has not been as competitive with Apple for the past year. It's not clear why Google waited so long, especially since Android has long lagged iOS in terms of monetization for developers, so you'd think the search giant has plenty of incentive to remain competitive, yet here we are.

Apple has gone to great lengths to incrementally shift investor focus away from the all-important iPhone business, which is technically more susceptible to volatility as a hardware-based business, toward its growing services business, which generates recurring revenue. That revenue is also extremely profitable, to boot. Services revenue has been marching steadily higher for years with no seasonality, another reality of consumer hardware. Apple hopes to grow its services business to $50 billion by 2020. 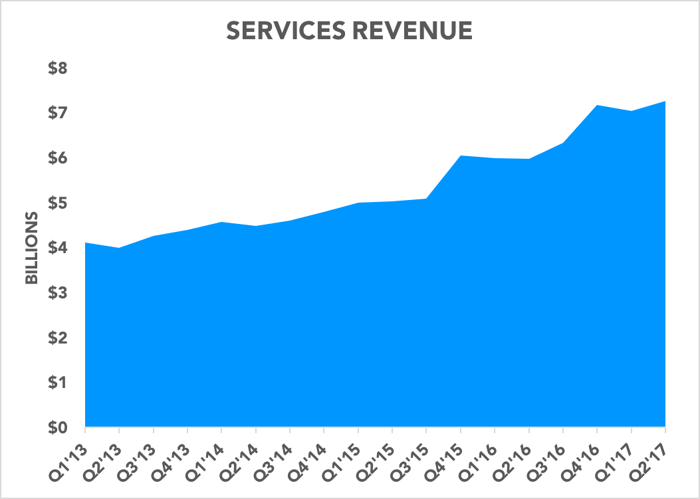 Subscriptions are playing an important role in that growth. The company only started disclosing paid subscriptions in fiscal 2017, so we only have three quarters' worth of data before Apple reports fiscal fourth quarter results on Nov. 2. Beyond in-app subscriptions through the App Store, paid subscriptions also includes things like Apple Music and iCloud storage plans, and do not represent discrete users (i.e., one user may have multiple paid subscriptions). Management usually shares this data point on the call. 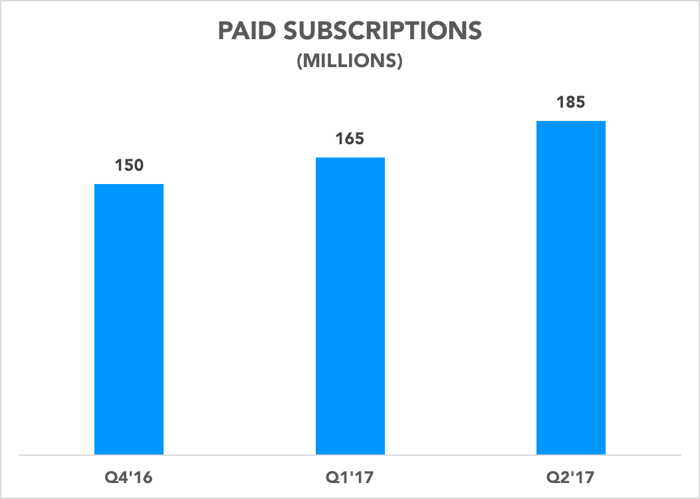 Alphabet's business is much more diversified, particularly when you include the non-Google subsidiaries, and Google's core business is advertising, so the company has never really shared many official figures regarding how many paid subscriptions go through its platform. Regardless, it's about time that the largest mobile platform on the planet by installed base matched Apple's cut of long-term paid subscriptions.