The industrial conglomerate reduced its full-year earnings outlook but raised its cash flow guidance. Here's what investors need to know.

Textron Inc. (TXT 0.07%) announced mixed third-quarter 2017 results on Thursday morning, highlighting solid top-line performances from Bell Helicopter and the Textron Systems division. But that growth was once again partially offset by a decline from Textron Aviation. With profitability headwinds from its industrial business, Textron followed by modestly reducing its earnings outlook for the full year.

After falling as much as 4.6% early in the day, Textron stock ultimately settled to close down around 0.9%. Let's take a closer look, then, at how the leading industrial conglomerate kicked off the second half of the year, as well as what investors can expect going forward. 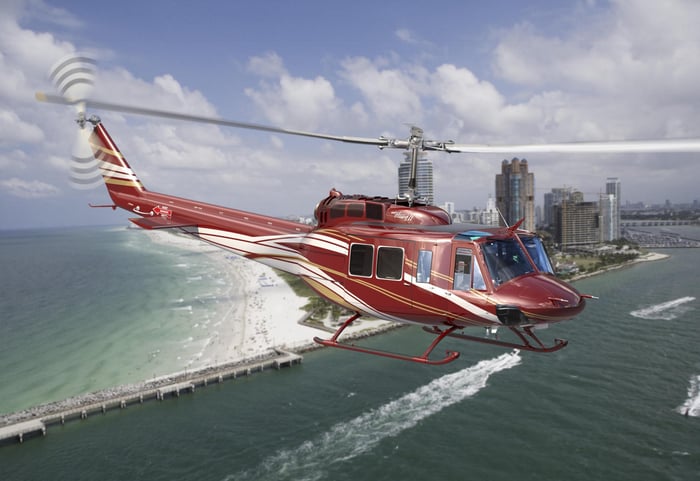 "Growth in the third quarter was the result of strong commercial demand at Bell, increased deliveries at Textron Systems and higher revenues at Industrial due to the acquisition of Arctic Cat," Textron chairman and CEO Scott Donnelly added in a prepared statement.

During the subsequent conference call, Donnelly lauded continued strong execution at Bell, with its healthy 13.1% operating margin driven by strength in commercial helicopter deliveries. But he also noted that the industrial segment "had a fairly tough quarter," in particular with the vehicle business.

The Artic Cat work is going well, but we have thrown a lot of resources -- particularly people -- at making sure that integration goes well. And frankly, we got a little behind on some of the rest of the business in terms of line rates and production output. As we worked our way through the quarter as we go here, and in the beginning of the fourth quarter, it looks like most of the line rates are back up to where we need them to be. We're not likely to be able to catch up on some of the miss from Q3.

Textron now expects full-year 2017 GAAP earnings per share from continuing operations to be in the range of $2.20 to $2.30 (down from previous guidance for $2.22 to $2.45) and adjusted earnings per share in the range of $2.40 to $2.50 (compared to $2.40 to $2.60 previously). On a more encouraging note, Textron simultaneously raised its guidance for full-year manufacturing cash flow from continuing operations (before pension contributions of roughly $355 million) to a range $800 million to $900 million, up from $650 million to $750 million previously.

To be fair, Textron's headwinds in the industrial segment seem more a temporary hiccup than anything else. And investors should be pleased with the continued recovery in commercial demand at Bell Helicopter. So while it wasn't terribly surprising to see shares endure a modest decrease yesterday in response, Textron's long-term thesis appears to remain firmly intact.