Shares of the gene therapy company uniQure N.V. (NASDAQ:QURE) rose by as much as 27% in early-morning trading today on over 27 times the average volume. uniQure's stock is responding positively to the unexpected advancement of its experimental hemophilia B treatment, AMT-061, into a late-stage study.

Specifically, uniQure said that it plans to initiate a pivotal-stage trial for AMT-061 in 2018 for patients with severe and moderately severe hemophilia B after consulting with both American and European regulatory authorities on the matter. 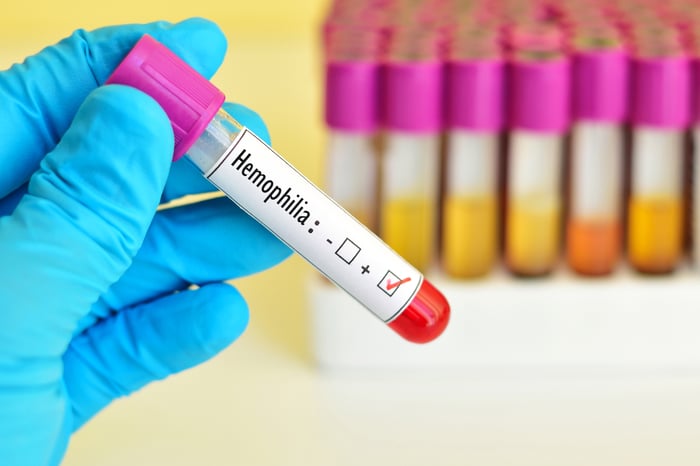 The big-ticket item is that the U.S. Food and Drug Administration (FDA) reportedly agreed to allow AMT-061 to proceed into a pivotal trial under the same IND and FDA Breakthrough Designation as its predecessor AMT-060. Long story short, uniQure altered 2 nucleotides in AMT-061 compared to AMT-060, leading to a single amino acid substitution that should, in theory, make it more potent. In the past, the FDA has generally taken a far more cautious approach with treatments that fall under the umbrella of "gene therapies" in order minimize the impact of any unforeseen safety issues.

The FDA's more relaxed stance, however, shouldn't necessarily be viewed as an endorsement of AMT-061's potential going forward. Gene therapies have a particularly rocky history in pivotal trials after all, and the agency has been undergoing a paradigm shift of sorts under its new leadership.

Investors should also carefully consider uniQure's financial position before buying shares in the wake of this positive development. With right around $100 million in its coffers at the end of the most recent quarter, and a quarterly burn rate of around $21 million, uniQure will probably need to tap the public markets soon to shore up its balance sheet, especially before undertaking a costly late-stage trial.