They grow up so fast. Just five years ago, MGP Ingredients (NASDAQ:MGPI) was an obscure company valued at $80 million. Today, it's valued at over $1 billion -- meaning it has become a 17-bagger for a handful of lucky investors. The company's primary function is to serve as a contract distiller for various whiskey products, including premium brands for Diageo and much smaller craft brands. It doesn't want fame and glory, which is why most investors have probably never heard of it.

Nonetheless, it's a pretty good time to be in the whiskey business, as the stock's performance indicates. But while the current market cap is still relatively small, and the industry's growth potential is salivating, it's easy to argue that MGP Ingredients stock could struggle to deliver additional gains in the next several years. Here are three signs that you should sell this 17-bagger stock. 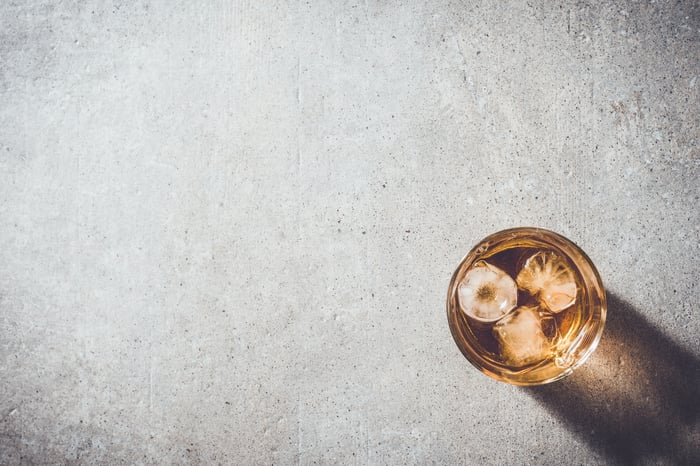 1. It hasn't earned its valuation

When MGP Ingredients stock was a no-name $80 million company five years ago, it was actually pretty cheap. It traded at just 0.25 times sales and 0.6 times book value. Then, it flipped a switch. Revenue and earnings soared in the next several years -- as did several valuation metrics. The result: The stock price grew much faster than might be expected or warranted.

Consider that the stock is currently trading at an astounding 3.2 times sales and 6.7 times book value. 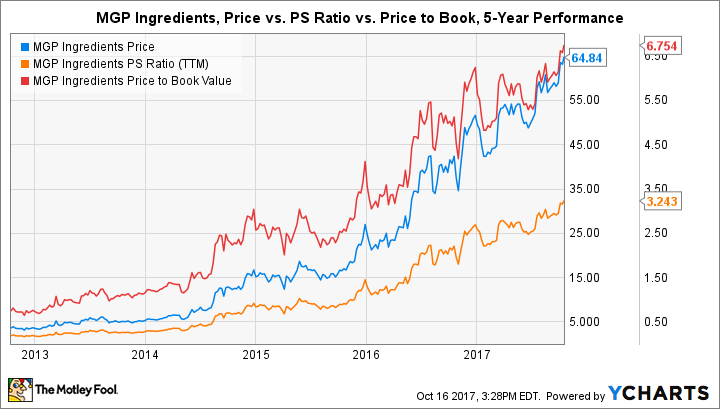 That's not unheard of for a high-growth stock, especially one that was plucked from obscurity, but the stock price is now appreciating much faster than performance is improving. Shares of MGP Ingredients are up 430% in the last three years, even though earnings have only grown 46% in the same span. 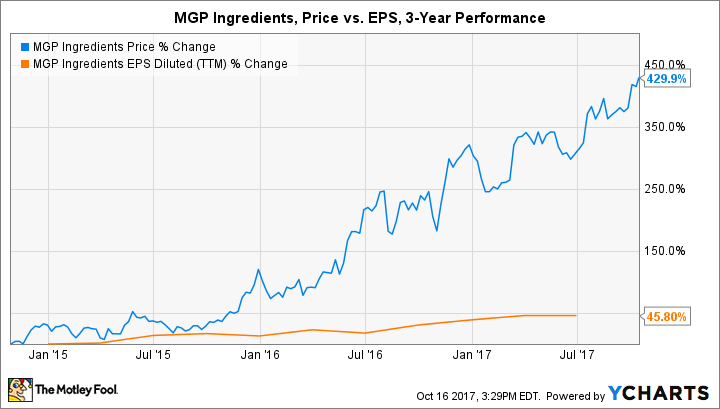 The trend has continued this year. The stock is up 29% year to date, while earnings per share in the first half of 2017 has improved only 11% compared to the year-ago period. Shares may be defying gravity right now, but that cannot continue forever.

One thing that investors won't notice without digging into Securities and Exchange Commission filings is that MGP Ingredients is facing increased pressure on its bottom line. Sure, EPS in the first six months of the year grew 11% compared to the first half of 2016, but earnings before income taxes (EBIT) didn't budge in the same span.

What happened? MGP Ingredients reported a 39.6% jump in corporate expenses during those comparison periods due to increased "personnel costs, advertising and promotion, and professional fees." That resulted in EBIT of $20.8 million in the first half of 2017 -- the exact same mark as last year. The only reason EPS grew 11% is that the company's effective tax rate dropped from 35.8% last year to 27.8% this year, saving $1.6 million in taxes.

That trend will be exposed if it continues much longer. The good news is gross margins grew in the same period, and corporate expenses can be reined in if things get out of hand. However, Wall Street analysts don't expect much earnings growth in the next 12 months. MGP Ingredients stock trades at 32.8 times future earnings -- a negligible difference from its current 33.4 times P/E ratio. Maybe EPS growth is stalling.

MGP Ingredients generates most of its revenue and income from high-margin premium beverage alcohols, relying on lower-margin commodity food and feed ingredients for just 16% of its sales and 14% of its gross profits in the first half of 2017. That has allowed it to generate healthy margins over the years, even with a relatively small manufacturing footprint. Simply put, the strategy has worked.

The attractiveness of high-margin products has not been lost on some very big potential competitors, many of which boast businesses that look like a mirror image to MGP Ingredients. That is, they generate most of their revenue and income from low-margin products such as fuel ethanol, only recently branching out to higher-margin food and premium beverage alcohol products. But they're fast approaching -- and that's a major risk to MGP Ingredients.

The two largest ethanol producers in the world, Archer Daniels Midland and Green Plains (NASDAQ:GPRE), recently announced that they're investing in premium alcohol beverage capacity at existing manufacturing sites. Why is this a major risk? Because size matters.

To be successful in commodity businesses such as fuel ethanol, you need to run a massive, well-oiled machine. That doesn't translate into very impressive margins (and it's been an unusually weak year), but it does result in access to capital -- and a lot of it.

That means Archer Daniels Midland and Green Plains can invest a lot of capital very quickly when they decide to enter a new space. Consider that over a span of fewer than 12 months, the latter acquired its way to become the world's largest vinegar producer and the fourth-largest cattle feedlot owner in the United States. They'll likely deploy the same "go big or go home" tactics as they invest in premium beverage alcohols.

While MGP Ingredients' partnership with Diageo is not in jeopardy from new competition, future growth opportunities with new customers will be. Unfortunately, it doesn't have the same capital to expand existing operations in an attempt to keep up.

MGP Ingredients stock didn't become a 17-bagger by mistake. It runs a genuinely strong business in a high-margin industry. However, it certainly hasn't earned its current valuation and continues to become more expensive each year. That could become a problem if EPS growth stalls in future periods, warning signs of which may already be present. The timing couldn't be worse given that massive, deep-pocketed competitors are targeting its primary business for their own financial gains. Long story short, I think now is a good time to sell MGP Ingredients stock.