The railroad company was able to produce its best quarter ever despite shutdowns from the hurricane.

Any company that has a lot of business operations in the Gulf Coast of Texas was expected to post poor results this past quarter because of the devastation that Hurricane Harvey wrought on the region. Looking at Kansas City Southern's (KSU) most recent results, you might not have noticed much of a change if management hadn't highlighted the impact.

Let's take a look at the railroad company's most recent earnings report, as well as what investors should be on the lookout for. 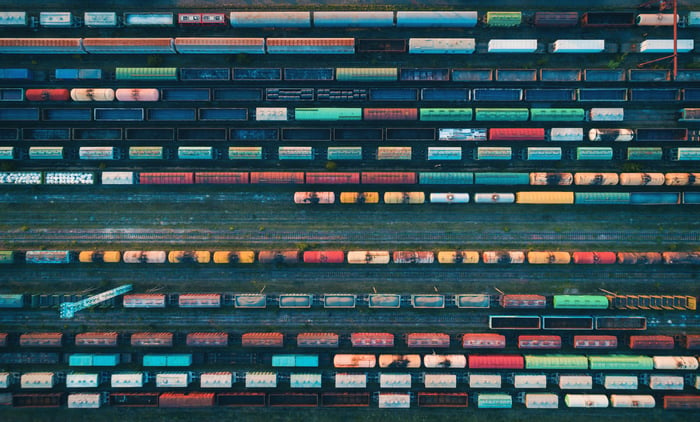 Kansas City Southern's results looked rather decent this past quarter. Revenue increased 8.6% compared to the prior year, and it resulted in a 9.8% increase in EPS. Revenue per carload increased across all commodities, but the largest drivers were energy and automotive.

Frack-sand and crude-oil deliveries to and from the Eagle Ford and Permian Basin shale formations remain high, and new automotive manufacturing facilities coming on line in Mexico have boosted cross-border traffic. For the year, energy and automotive revenue are up 51% and 24%, respectively, compared to the first nine months of 2016.

The company's operating ratio -- operating costs divided by revenue -- a common industry metric for measuring efficiency, came in at 64.4%. Compared to the two most efficient Class 1 railroad companies in North America -- Canadian National Railway and Canadian Pacific Railway -- that number isn't great. It is, however, close to historical results for the company and remains one of the better results for American railroad companies. 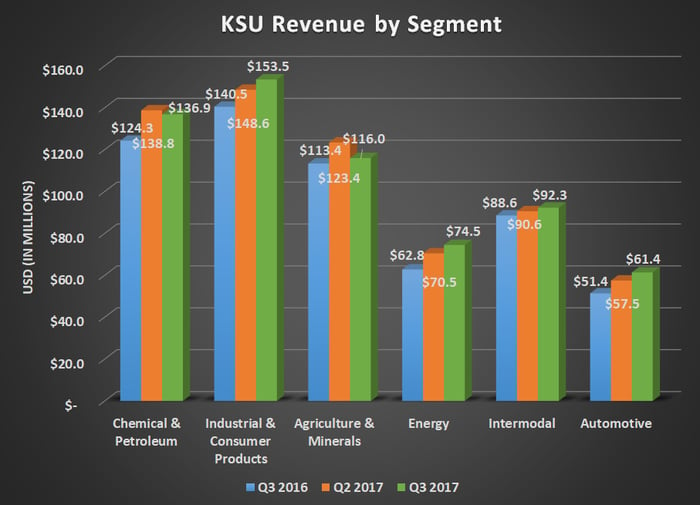 Here is the fascinating thing to consider when looking at Kansas City Southern's most recent results. Even though revenue came in the same compared to the prior quarter, it includes the fact that operations around the U.S. Gulf Coast were shut down for several days because of Hurricane Harvey. According to management, the company lost about $19 million to $23 million in operating income as a result of lost revenue opportunities, or $0.12 to $0.14 in earnings per share.

Also, that lost revenue increased its operating margin by 140 to 160 basis points. There's a possibility that the company would have posted one of its most efficient quarters in a long time were it not for the hurricane.

In the company's press release, CEO Patrick Ottensmeyer was sure to highlight that the company was able to produce those results in the face of disruptions from Hurricane Harvey:

KCS' third-quarter financial results were strong, even with the impact of Hurricane Harvey on KCS' U.S. Gulf Coast and cross-border traffic in August and September. Despite the severity of the storm and widespread flooding, we recovered quickly from the extended service outage, delivering record third-quarter operating income, operating ratio and adjusted earnings per share.

Despite the challenges that Hurricane Harvey threw at the Gulf Coast region, Kansas City Southern did a rather remarkable job of getting its operations back up to full speed and produced better results than the prior year. That result is a testament to both the company's improved operations and the growth of cross-border traffic between the U.S. and Mexico. It's not that hard to envision Kansas City Southern producing a great result in the coming quarter.

The real storm that investors should watch for is the current NAFTA renegotiations. Kansas City Southern has leveraged a lot of its future based on open trade between the U.S. and Mexico. Were that to be disrupted, it could put this company in some real trouble.