Amid the race toward autonomous vehicles and the hunt for new revenue streams, unique partnerships and acquisitions continue to be a focus.

At a time when vehicle sales are peaking in the lucrative U.S. market, automakers' management teams face the unenviable task of finding new revenue streams. Fortunately for them, the line between Silicon Valley technology companies and Detroit automakers has begun to blur, which is opening up new possibilities for team-ups and acquisitions in areas such as smart mobility and ride sharing.

In the competition on those fronts, both General Motors (GM 1.35%) and Ford Motor Company (F 1.71%) made fresh moves recently. Here are the details of those moves, and why they matter.

"The successful deployment of self-driving vehicles will be highly dependent on the availability of LIDAR sensors," said Strobe founder and CEO Julie Schoenfeld in a press release. "Strobe's deep engineering talent and technology backed by numerous patents will play a significant role in helping GM and Cruise bring these vehicles to market sooner than many think."

At the moment, the price of acquiring Strobe is unconfirmed, but the deal has a couple of noteworthy implications. Lidar sensors are critical components in many systems for allowing vehicles to recognize where they are observe the behavior of objects around them. But those systems are currently very expensive; existing solutions cost tens of thousands of dollars per vehicle. By acquiring Strobe and combining its tech and talent with that of Cruise Automation, GM hopes to be able to bring its self-driving cars to market faster and cheaper.

While GM's recent deal was designed to give it an edge in driverless vehicle technology, Ford's latest move was focused on generating new revenue streams through transportation as a service. Ford is partnering with Autonomic Inc., a small Silicon Valley start-up, and using its software platform to develop new transportation service applications. The first such service is called Non-Emergency Medical Transport, and was launched over the summer by Ford and a Michigan hospital; it will enable patients to schedule pickups and appointments using a mobile phone app. It's just the latest sign that Ford is getting more serious about generating revenue from businesses outside of its core vehicle production business; it has already teamed up with Domino's Pizza to test having self-driving Ford Fusion Hybrids deliver pizzas in Ann Arbor, Michigan. 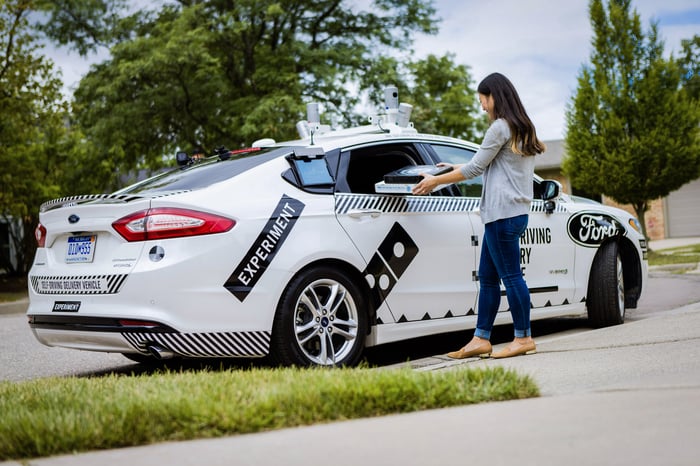 The main takeaway for investors is simply that Detroit automakers are proving they're no longer the short-sighted and arrogant companies they were a few decades ago. They understand they need to generate new revenue streams to bolster their historic vehicle production business, and they know they'll need Silicon Valley's help to do that. Long-term investors can rest assured that management is looking in the right direction -- something that hasn't always been the case.