Something big just happened in the robotic surgical industry. Last week, a small company called TransEnterix (NYSEMKT:ASXC) won FDA approval for its Senhance Robotic Surgical System. The regulatory win marks the end of an era for Intuitive Surgical (NASDAQ:ISRG), a company whose da Vinci system has enjoyed monopoly status in the U.S. since its launch at the turn of the century.

Does this approval spell trouble for Intuitive Surgical, or is TransEnterix simply too small (and too late) for it to matter?

To answer these questions, I got in touch with TransEnterix's CEO Todd Pope. Below are some highlights from our conversation (which have been lightly edited for clarity). 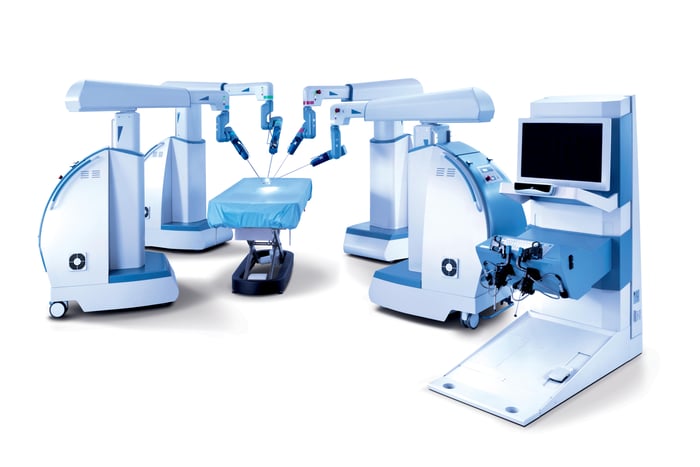 On the Senhance Robotic Surgical System

One key piece of information is how TransEnterix's Senhance System stands apart from the da Vinci.

As CEO Todd Pope stated during his special call with investors, Senhance offers four primary benefits over the da Vinci, including:

Of all of these features, the reusability of instruments could be the most threatening innovation to Intuitive. Intuitive's razor-and-blade business model depends on the repeat sale of high-margin disposable instruments (52% of Intuitive sales last quarter were from instruments and accessories). By offering instruments that can be resterilized and reused, the Senhance system could be highly disruptive.

CEO Pope hammered this point home during our conversation:

The Senhance system uses reusable instruments which is a significant factor in bringing the per-procedure costs closer to standard laparoscopy costs. That's our goal: significantly add meaningful improvements to laparoscopy while reducing the economic barrier robotics has represented to date.

Next, I asked CEO Pope to discuss which procedures Senhance has been cleared for:

We have an initial clearance for laparoscopic colorectal surgery as well as gynecologic surgery. We have over 23 procedures included which represent nearly 1.5 million procedures done annually in the U.S.

Gaining access to 23 procedures right out of the gate is an impressive accomplishment. What's more, since gynecological and colorectal procedures are very common, the company's growth opportunity in the U.S. appears to be massive.

With a differentiated product and large market opportunity ahead, I wanted to know TransEnterix's plans for introducing the product to market. Given my background in launching medical devices, I'm keenly aware of how challenging this process can be.

I first wanted to learn how big TransEnterix's salesforce is. Here's what CEO Pope had to say on the company's special call with investors:

We began the year with a market development team of five people, and we currently have nine people in the field. We have been actively recruiting to fill additional high-value territories by the end of 2017.

Getting the word out with such a small sales force is going to be tough, especially since Intuitive employes a small army of reps and clinicians that boast deep relationships. 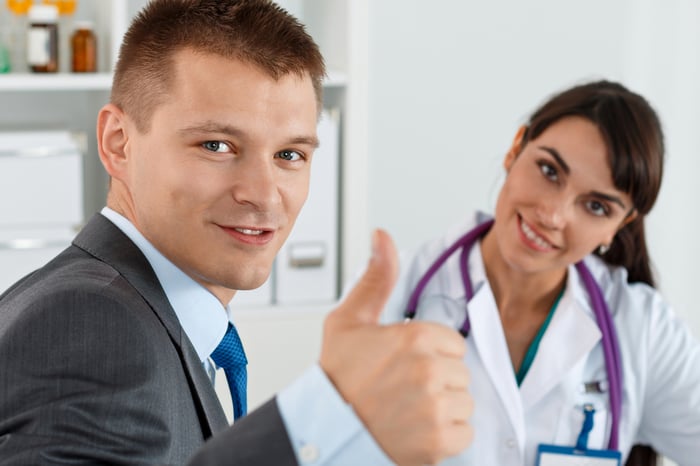 However, one factor working in the company's favor is that the timing of this approval lines up perfectly with two major surgical conferences; the American College of Surgeons meets in just a few days, and the American Association of Gynecologic Laparoscopists has a meeting in November. TransEnterix plans on attending both meetings to help get the word out.

We're really focusing on hospitals that are interested in experiencing the benefits of robotics, particularly across like high-volume laparoscopic procedures. So we can now meet some of the constraints that the hospitals are operating under this value-based healthcare that we continue to hear about. I think up to this point, robotics has been successful. But over the macro scale, penetration [is] still relatively low.

CEO Pope also stated that the company has had a handful of success stories outside of the U.S., where a hospital choose Senhance even though they already had one or two da Vinci systems in place. That's nice to hear, but it is worth pointing out the sample size is very limited. A grand total of three Senhance systems have been sold worldwide thus far, though the company did say that seven Senhance systems are in place under a variety of arrangements.

While the Senhance appears to be a differentiated product that is staring down a large market opportunity, there's no doubt that competing against Intuitive is going to be a tall order. After all, TransEnterix had previously indicated that Intuitive was offering reluctant hospital systems refurbished da Vinci systems at a deep discount in order to sway them to stick with the market leader. How will be TransEnterix be able to compete if Intuitive uses a similar tactic in the U.S.?

When I asked CEO Pope to elaborate, his response took me by surprise:

We don't see ourselves as competing with da Vinci, they address a different surgical population than we do. Their technology was an improvement to open surgery. We are pioneering a new era in digital laparoscopy. Our vision is that there should be a Senhance System in every operating room that is focused on high-volume minimally invasive surgery, similar to how all hospitals have core technology like MRIs and CT Scans.

Sending the message to the market that the two companies won't compete on a head-to-head basis is a smart move. However, it is unclear to me whether or not hospital systems with fixed budgets will see things the same way.

There's no doubt that the approval of the Senhance represents one of Intuitive Surgical's toughest challenge to date. The reusability of the Senhance's instruments could throw a wrench in the da Vinci's value proposition, and it could cause some hospitals to push back on pricing. If that happens, Intuitive's margins and profits could take a big hit.

On the other hand, investors need to keep the big picture in mind when they think about these two businesses. Robotic surgery is poised for massive growth in the years ahead as the technology continues to evolve. That means there could be more than one winner in the space, so it might be a mistake to think with a winner-take-all mentality.

Personally, I think the approval of the Senhance System could be a game-changer for the industry, but I think Intuitive's near-monopoly will continue for years to come. That's why I plan on remaining a happy shareholder of Intuitive Surgical for the foreseeable future. However, you can bet that I'll be tracking TransEnterix's progress like a hawk.