Avocados are considered a superfood because they're a good source of healthy fats, loaded with dietary fiber, and have catalyzed market-beating returns for Calavo Growers (NASDAQ:CVGW) stock. When dividends are included, shares have returned 205% in the last five years compared to a 97% total return for the S&P 500. 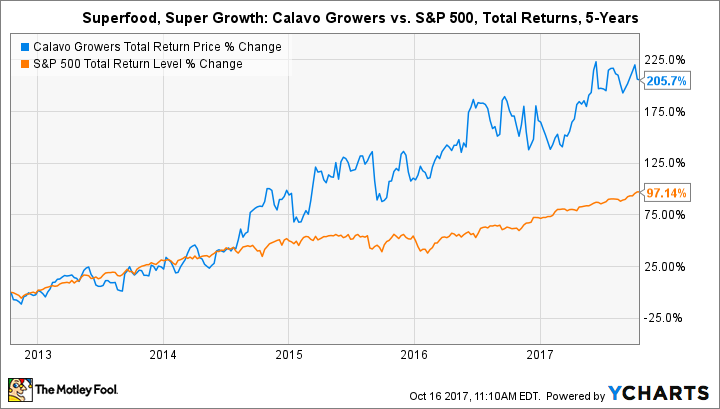 Revenue and earnings continue to trek higher. The dividend continues to grow. Past expansion plans have paid off, while future investments give shareholders more to look forward to. But investors unfamiliar with Calavo Growers will probably ask: Is growth from avocados really that sustainable?

It's not a stupid question. In fact, it's one that leads to more digging into the trajectory of the business and helps to determine if the stock's relatively expensive valuation is worth the risk. 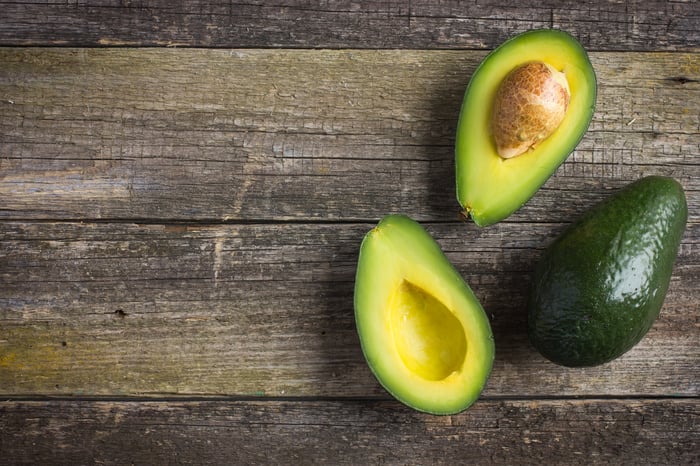 Let's begin with a simple fact: Avocados have indeed been incredibly important to Calavo's growth. In the first nine months of the company's fiscal 2017 (each fiscal year wraps up at the end of October to smooth out volatility from specialty fruit harvest periods), sales of avocados accounted for 51.2% of total revenue. Avocado revenue grew 15% compared to the year-ago period, in step with total revenue growth of 16% in the same span.

However, there's much more to the business than avocados. Calavo Growers generates revenue from three business segments:

While the bulk of revenue is generated from fresh products, investments in the retail side of the business have paid off handsomely. In fact, food service and retail revenues are currently growing at a faster clip than sales of fresh products -- even holding their own if you exclude sales of tomatoes and papayas, which are experiencing year-over-year declines.

As the numbers show, growth is actually being driven more by the RFG unit and retail products than sales of fresh avocados. With that in mind, let's turn to several important valuation and growth metrics.

In early September, Calavo Growers management reaffirmed its fiscal 2017 guidance that called for double-digit revenue growth and higher gross income. It also provided shareholders with their first glimpse of fiscal 2018 expectations -- and they're pretty good.

Management expects total revenue to grow 20% in fiscal 2018 compared to fiscal 2017 (the current fiscal year) and to turn in record EPS. That means Calavo Growers is expecting growth to accelerate going forward, mostly thanks to investments in the retail side of the business.

Despite the rosy outlook, Calavo Growers stock is relatively expensive on a historical basis. The current price-to-sales and price-to-book ratios are all near five-year highs. 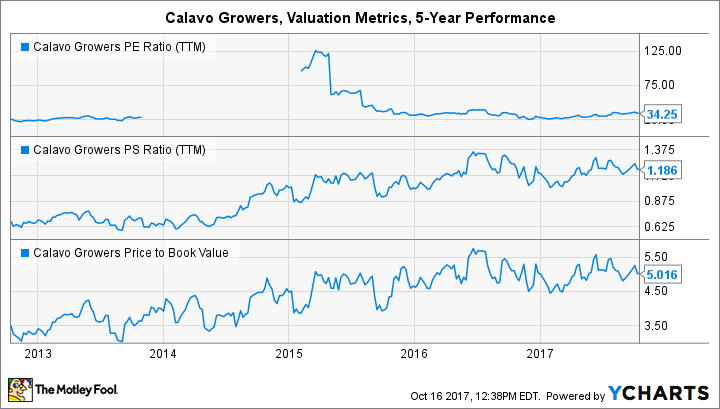 Wall Street expects for future earnings to be higher, but the average of analyst estimates still puts the current stock price at a valuation of 25 times future earnings, according to Yahoo! Finance. That's a little higher than the historical average. Similarly, a PEG ratio of 1.66 hints that analysts are expecting growth to slow down in the next five years, seemingly in contrast to management's optimism (for fiscal 2018, at least).

The tricky part is knowing whether or not any of the comparisons to historical valuation averages matter. After all, the company has never achieved year-over-year revenue growth of 20%, so perhaps it should be trading at a relatively expensive valuation. As they say at my favorite Mexican place, the guac is extra.

Can Calavo Growers be a growth stock?

The only thing that may make investors think twice is that the recent trend of continually improving EPS and operating cash flow, measured on a trailing-12-month basis, has appeared to slow this calendar year. 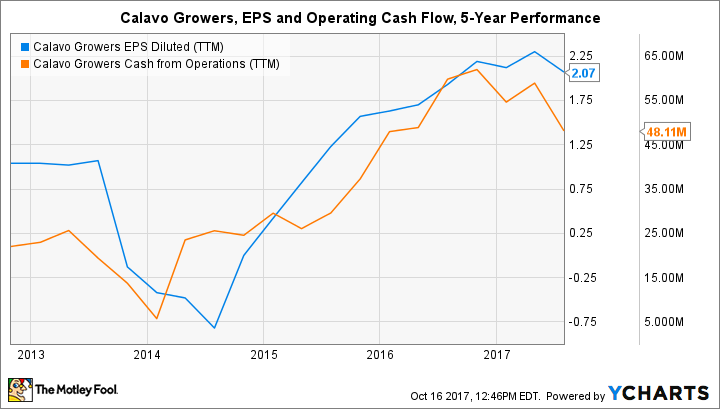 However, I'm inclined to think the slowdown is a temporary blip on the radar. Should Calavo Growers continue to execute and meet its fiscal 2018 expectations, then I think the stock will continue its torrid pace higher and more than grow into its relatively expensive valuation. That would also force Wall Street to increase its future earnings estimates for the business. I think investors should feel pretty confident that Calavo Growers can continue to be a growth stock for the foreseeable future.