Intel is clearly targeting the gaming market with its latest CPU, but is this more smoke than fire?

Intel Corporation (INTC -0.86%) launched its latest generation desktop central processing unit (CPU) in September and made some pretty bold claims about its capabilities. In a press release, Intel stated that the 8th generation core desktop processor was its "best gaming processor ever." The company also said it was "laser-focused on giving the enthusiast community the ultimate desktop experience, from chart-topping performance to a platform that can flex with their needs," according to Anand Srivatsa, general manager of the Desktop Platform Group at Intel. "Our 8th Gen Intel Core desktop processors deliver tremendous improvements across the board and -- for gamers, in particular -- offer an unbeatable experience."

Most diehard gaming enthusiasts insist on a graphics processing unit (GPU) as an essential component of their system, and that market is dominated by NVIDIA Corporation (NVDA -2.51%). The company controls just over 70% of the discrete desktop GPU market, while Advanced Micro Devices, Inc. (AMD -3.28%) accounts for the rest.

News of Intel's latest processor sent shares of NVIDIA and AMD plummeting. In light of these claims by Intel, do the graphics processing specialists have anything to worry about? 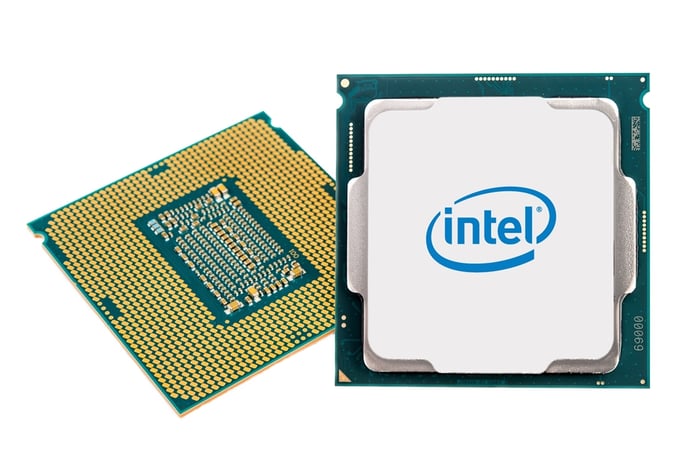 It's important to understand the context of what this means to each company, so let's take a look at their revenue. In its most recent quarter, Intel generated sales of $14.8 billion, NVIDIA produced $2.2 billion, and AMD trailed with $1.2 billion. Intel's business dwarfs that of its smaller competitors. It's also worth noting that while NVIDIA's only product is GPUs, AMD competes with Intel in the CPU market. For the second quarter of 2017, Intel commanded 69% of the CPU market to AMD's 31%.

Stealing market share from either wouldn't do much to increase Intel's revenue, but it could make a significant dent in the fortunes of the smaller chipmakers. With that in mind, is Intel a threat to either company's GPU business?

A tool for every purpose

A CPU is responsible for executing the stored instructions necessary to operate the computer and run each program it uses, as well as performing calculations. Over the years, while much has changed, the function of the processor has remained the same: retrieve the instructions, determine what they are, and execute them.

Graphics processors, on the other hand, have a very specific function -- they render images. More specifically, a GPU performs a number of simultaneous mathematical calculations at a high rate of speed, which accelerates the creation of the images. These capabilities make them much more efficient at the computationally intensive task of graphics generation then CPUs. It also drastically improves the experience for high-end gamers.

Intel's latest offering increases the frame rate, or the number of times the image is shown per second, by 25% compared to its previous version, according to its press release. While this might provide additional performance improvement, to achieve the type of results required by serious gamers, it isn't going to replace the GPU.

There's always a but. There are other areas where Intel is trying to compete with the two -- like the burgeoning AI market. Intel's latest offering may also represent a threat to AMD's CPUs, which have been gaining share against Intel. The 31% market share AMD achieved in the second quarter of this year is the highest level in a decade, having catapulted 10% in the quarter since AMD released its Ryzen line of desktop CPUs. While AMD's latest chip wasn't nearly as fast as Intel's, it did provide a competitive option at a significantly lower price, which is great for gamers on a budget.

Intel may steal some share back from AMD with its latest generation CPU, but it doesn't even compete with the GPU.